NIS, Serbia — There were 76, but they were dubbed the "Russian 100" — life-savers flown in from Moscow within hours of an appeal for help from Serbia as the heaviest rainfall in more than a century inundated the Balkans in May.

Brits, Austrians and Bulgarians arrived too, deployed by the European Union to aid an aspiring member of the bloc. But the Russians arrived first, and in force. "Crazy brave" was how Serbia's prime minister described them.

Russia at the time was earning the ire of the West for dismembering Ukraine, so the PR in the Balkans was priceless. "They won the day," said one Western diplomat.

Twenty-five years after the fall of the Berlin Wall signaled the collapse of the Kremlin's grip on Eastern Europe, Russia is re-asserting some of its lost influence.

That is most obvious in Ukraine, where unmarked tanks roll across the countryside in support of pro-Russian separatists.

But it is manifested in more subtle ways too, all over ex-communist Eastern Europe: in the energy deals governments sign with their main natural gas supplier, in closer diplomatic ties, and in what Western diplomats say is a growing Russian effort to win over public opinion on an increasingly hostile continent.

In October, Russian President Vladimir Putin was guest of honor in Belgrade at a rain-soaked military parade marking 70 years since the Red Army liberated the city from the Nazis. In November, Russian paratroopers held a one-day drill with Serbian soldiers, and Russian Patriarch Kirill blessed a statue of Tsar Nicholas II outside a Serbian presidential building.

"They're ramping it up," said the diplomat, who declined to be named.

Protecter of the Slavs

The Russian relief effort in May was coordinated through the Serbian-Russian Humanitarian Center, a spotless new building opened in 2012 in the southern Serbian city of Nis as a disaster-response center with regional reach.

It plays on the image some Serbs hold of Moscow as protecter of its Slav brethren and lies barely 50 kilometers from Kosovo, where 5,000 NATO troops still secure the peace between majority Albanians and minority Serbs, 15 years after alliance airstrikes wrested the territory from Belgrade.

Equipped with shiny red fire trucks, boats, generators and tents, the center is a "pilot project," said co-director Viktor Safyanov, with others planned in Latin America and Russia's ex-Soviet backyard of Central Asia and the South Caucasus.

It saved 3,000 people during the floods, he said, and has plans to expand to become "international." 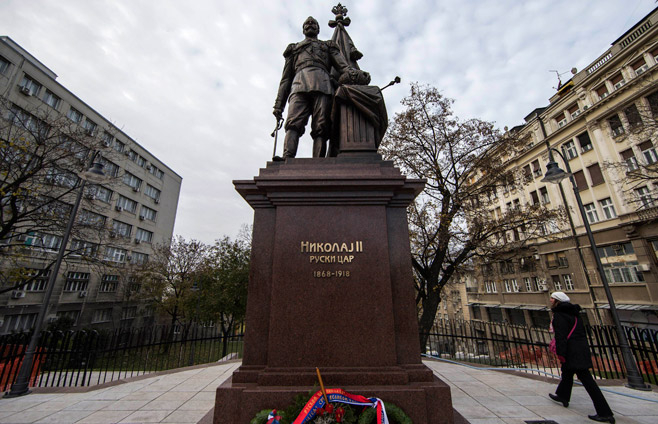 A woman walks past a statue of Tsar Nicholas II of Russia outside the Serbian presidency building in Belgrade.

This month, Russia launched a state-of-the-art media organization to counter what its chief journalist called the West's "aggressive propaganda," with offices in dozens of cities around the world, including Belgrade.

The Serbian office will have a staff of 30 and launch a Serbian-language news website by the end of this year and radio broadcasts early next, said its head, Ljubinka Milincic.

"I think earlier Russia often lost the race with Western media," Milincic told the Serbian daily Danas on Wednesday. "We simply want to show that truth has another side too."

Western money flowed to independent media, pro-democracy activists and politicians in the 1990s as the West tried to bolster opposition to then Moscow-backed strongman Slobodan Milosevic. Western foundations are still active in supporting media and civil society.

Western diplomats say Russian money may be finding its way to media outlets in Serbia, sympathetic think tanks and political parties too, though firm evidence is hard to come by.

They also suggest support for right-wing groups that promote the more conservative values embraced by much of Russian society — Orthodox Christian, patriarchal and anti-gay.

"It's clear that Russian intelligence services are financing — from the Baltics down to Bulgaria — extreme right movements, various unofficial groups, cultural groups, and that is where a lot of their cash is going," said a former senior government official with experience working across the region.

"Obviously, journalists too," he said. "They are using a certain type of soft power there."

Serbia, Bulgaria and Hungary, where Prime Minister Viktor Orban stands out in the EU for his warm relations with Moscow and a 10 billion euro ($ 12.5 billion) Russian loan this year to expand the country's Paks nuclear plant, lie on the route of Russia's planned South Stream gas pipeline, and have been frustrated by the EU's refusal to give the go-ahead to construction. 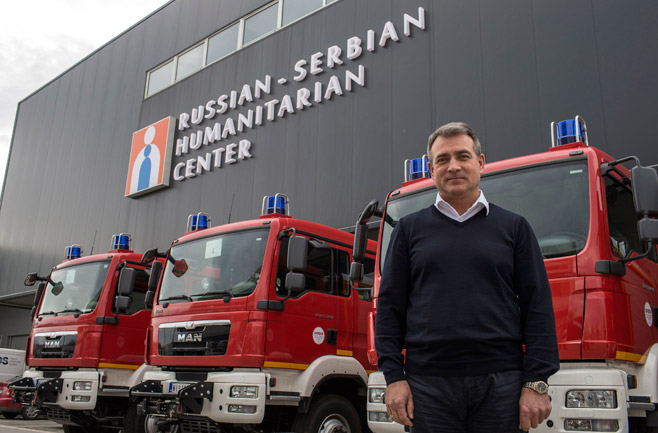 Viktor Safyanov, co-director of the Serbian-Russian Humanitarian Center, posing in the Serbian city of Nis.

'Not Just About Ukraine'

Serbia would appear to be fertile ground, balanced between a government committed to Western integration, and a generally conservative society within which some Serbs feel greater affinity with Russia.

As part of socialist Yugoslavia during the Cold War, Belgrade was neither with the East nor the West, and though voters in search of prosperity have repeatedly backed a pro-EU course, many remain suspicious of the West since the NATO airstrikes, in which some bombs went astray and hit Serb civilians.

To publicly cross Russia is politically unpalatable; Serbia has refused to sign up to EU sanctions on Russia over Ukraine despite pressure to align its foreign policy with that of the 28-nation bloc.

The tug-of-war, however, is more often played out behind closed doors. Two sources familiar with preparations for Putin's visit in October said the Kremlin had asked that Russian staff in Nis be granted diplomatic status, but that Western ambassadors in Belgrade balked at the possibility of Russian supplies arriving in Serbia under the radar, and Serbian Prime Minister Aleksandar Vucic refused.

While there is no suggestion of any Russian or Serbian military threat to Kosovo, which is not recognized by Moscow or Belgrade, the East-West political tussle over Serbia is sharpening.

As Belgrade hosted Putin, Vucic's interior minister signed a letter of intent accepting a long-standing EU offer to join the bloc's own crisis-response body, the Civil Protection Mechanism, part of the country's slow-moving integration with the bloc before eventual accession.

A draft agreement is being approved, and may have implications for the Russian center. "If the Nis center is meant to have a larger regional role … its activities may need closer scrutiny at the European Union level," said an EU official, who declined to be named.

EU accession "is a very slow process, and this is where people like President Putin and his acolytes are using this slowness to be a hindrance," said Ivan Vejvoda, senior vice president for programs at the German Marshall Fund.

Vejvoda, former foreign policy adviser to Zoran Djindjic, an-ex Serbian Prime Minister assassinated in 2003 after playing a leading role in the ouster of Milosevic, said that despite Russia's best efforts, Serbia's compass was set to the EU and that was unlikely to change.

"It's good PR for Russia, but as we would say with Djindjic when we worked together, you have to take three steps back and look at what's actually happening."

As Serbia advances towards EU membership, many Serbs feel they share more values with fellow Orthodox Russians than the more liberal Europeans.
news

Serbia Salutes Putin but Says Future Is With Europe

'Cafe Putin' to Open in Serbian Town in Support of Russia

President Vladimir Putin may have won few recent admirers in the West, but he has found an unusual ally in the form of a Serbian restaurant owner who...
Body count