Performance artist Yelena Rikhova and her partner stand on opposite sides of a ping-pong table. One by one, Rikhova drops the pinecones she's holding in her hands as her partner mirrors her actions, moving the dry pinecones across the table as they scratch the surface.

Visitors had been led up to the second floor of the gallery Tuesday by a flautist who played as they traveled through the exhibit and then escorted them down after Rikhova's show had finished.

It's very special performance, said Tatiana Sakhokiya, the Kandinsky Prize director, adding that the acoustics at Udarnik, a converted movie theater, made it the perfect place for such a collaboration mixing music and performance art.

Rikhova is a finalist in the "young artist" category of this year's Kandinsky Prize, Russia's biggest contemporary art competition. Nominees for both the main prize for art project of the year and those in the young artist categories are currently on display at the Udarnik gallery.

The Kandinsky Prize was started in 2007 by Shalva Breus, a printing magnate and founder of the Breus Foundation for contemporary Russian art. Taking inspiration from the U.K.'s Turner Prize, the Kandinsky Prize offers more than just recognition: The main prize winner gets 40,000 euros, and the young artist winner — under 35 years old — gets 10,000 euros.

An international jury chose 30 out of 418 submissions to be put on display at Udarnik.

Three main finalists in the main prize and the young artist prize were announced in late October, and the winners will be announced Dec. 11 in a special ceremony.

The Kandinsky Prize "gives artists the chance to be seen, both in Russia and abroad," said Sakhokiya, who is also the vice president of the Breus Foundation.

"It is also an educational program, with lectures and master classes," she said, and can bring long-lasting benefits for artists. Winners have the chance to be invited to international galleries and represent Russia abroad, as last year's winner Irina Nakhova will do at the Venice Biennale in 2015.

Works by this year's prize nominees, which range from performance art and photography to video installations, painting and sculpture, are displayed over the three levels of the gallery. 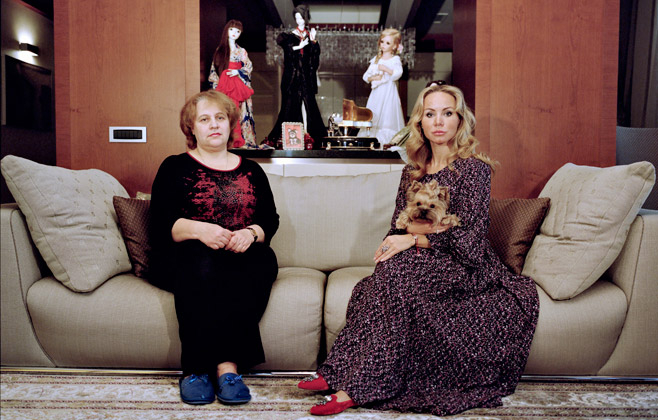 One of Li-Mi-Yan's photos of Russians and their staff on show at Udarnik.

One finalist for the main prize, Lilia Li-Mi-Yan, has a fascinating series of photos called "Masters/Servants" that depicts the daily lives of Russian employers and the people who work for them: housekeepers, drivers and nannies.

"The idea came from inside me. I was born during the Soviet Union and now I have home help, a driver. I just wanted to tell these stories," said Li-Mi-Yan, an artist and documentary photographer.

One photo shows two women. Tatiana the employer poses in a plush black armchair, clad in designer clothes, black high heels and wavy, coiffured hair. Yelena is standing behind her, hair pulled back, dressed plainly and carrying a pile of sheets.

The caption says that Tatiana studied design but does not work. Yelena trained as an engineer but now works as a housekeeper and cares for her daughter, who is disabled.

Once Li-Mi-Yan started the project, word spread quickly, with friends suggesting other people with household staff, and she collected enough photos to publish her own book.

Being nominated has been very valuable, she said. The Kandinsky Prize is important for contemporary art because "in Russia there are few artists, few prizes, few of everything!"

Sakhokiya says the Kandinsky Prize is outside politics.

"According to prize regulations, the law that we work by, and the international jury, it's the artistic value and merit of the works that are judged here. We are outside politics. The jury values only art," she said.

"Of course there are works that deal with political moments. Of course they exist," she said, mentioning "Figure #2: Game" by Timofey Radya. A video of the artist's installation shows a model of the five Olympic rings with hundreds of fake 5,000 ruble banknotes thrown around it, a clear comment on the Sochi Olympic Games, which cost Russia tens of billions of dollars.

"Money to the wind," Sakhokiya said, quoting Radya. "It's a commercial, but perhaps also a political comment," she said.

Editor's note: This article has been changed to correct the prize money for the main prize and the young artist winner.

Kandinsky Prize works by this year's nominees are on show until Nov. 30 at the Udarnik gallery, located at 2 Ulitsa Serafimovicha. Metro Polyanka, Kropotkinskaya. 495-657-9758.