Alexander Brodsky, who has been called Russia's greatest living architect, does not have any of the self-importance one might associate with such a grand title.

He wears round tortoiseshell glasses and a black suit, almost blending into Triumph Gallery's dark walls at the opening of his latest exhibition "Mainstream."

Soft-spoken and affable, Brodsky exchanged handshakes and laughed with fans, many of whom are friends.

"I've known Sasha for 40 years, since our days at the [Moscow Architecture] Institute," said Lena Budina, an architect and teacher. "He has grown so high, and we all look up to him."

The first floor of "Mainstream," Brodsky's first show since 2013, displays small wooden barn structures, covered in fabric and tar roofing materials. The structures have roofs and low windows cut into the sides, but no floors; instead there are video projections on the ground with what looks like flowing streams of water.

"The idea is time, which only moves in one direction," Brodsky told The Moscow Times. "Time is not fixed. As it passes, it captures everything in its path."

Fittingly, "Mainstream" is arranged with a flowing stream in mind, moving from one side of the space to the other, said Triumph Gallery spokeswoman Marina Bobyleva.

Brodsky can "go beyond the boundaries of his own architectural thinking and construct significant chunks of real or imagined space," art critic Andrei Tolstoy wrote in the show's introductory brochure, saying Brodsky has the ability to work with his environment, not against it.

Brodsky came of age in the Brezhnev era, architecturally better known for the uniform apartment blocks that dot the country. Jobs were virtually nonexistent for architects who wanted to work creatively, so Brodsky worked outside the Soviet system and sold art abroad or in Moscow, when possible.

Brodsky and his contemporary Ilya Utkin were at the center of what was called the "paper architecture" movement, as their work remained on the drawing board and had no chance of being made.

Their fantastical, gothic drawings stood in stark contrast to the bland designs of the Brezhnev era, and were in their own way a kind of social criticism. One of his most famous works done with Utkin is "Dwelling House of Winnie the Pooh in a Big Modern City" (1983). 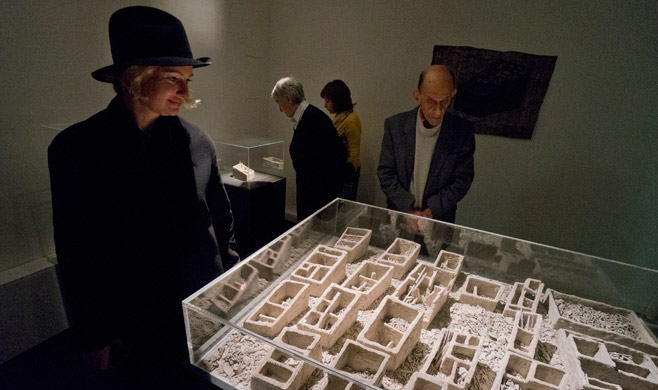 Brodsky is one of the most famous 'paper architects' from Soviet times.

Something of the gothic lives on in Brodsky's "Mainstream." The basement level of the exhibition displays birds and abstract figures painted on lighted windows, as if they were windows around a house.

Despite his history of pushing creative boundaries, Brodsky generally shies away from politics.

"There are no politics [in 'Mainstream']," he said, and he seems to only desire to have the freedom to do the work he chooses.

"Twenty years ago I took a group of my students to one of Sasha's shows," Budina said. "Now they're all grown up — one's a lawyer, one's a journalist. They all became someone. And I wonder whether a small part of that show lodged itself in their minds."

Made of wood and brick, Brodsky's "Rotunda," perhaps his best-known structure, stands in the middle of a field in Russia's central Kaluga region, part of the land art in the village of Nikola-Lenivets. Built in a classic form, "Rotunda" has doors around its exterior to open itself up to, or shut out, the elements.

Made of ice, wood and metal mesh, the "Ice House" was built in 2003 as a bar set on a frozen lake. The pavilion was then lit from the inside, which made it glow. In spring the ice melted and the structure was dismantled.

"Oval Shade" was designed for Moscow's newly refurbished Gorky Park. Made of wood and polymer resin, it stands from summer until fall. Hammocks hang from its beams and yoga mats can be placed underneath.