Less than a week after Soviet Arctic scientist Nikolai Yevgenov returned from a gruelling expedition across unforgiving icy deserts, he was taken from his home in the middle of the night by the notorious secret police.

While Western polar explorers like Roald Amundsen are revered household names, after Stalin unleashed his Great Terror in the 1930s, the reward for many of their Soviet counterparts upon returning was a spell in a labor camp — or even death.

For Yevgenov, the horror began one night in May 1938. At 2 o'clock in the morning, the doorbell rang at his home in Leningrad, as St. Petersburg was then known. At the door were three men from the NKVD, the dreaded secret police.

Yevgenov, 49, was deputy head of the Hydrographic Directorate of the Administration of the Northern Sea Route, which organized Russia's Arctic expeditions. As one of the daring explorers who were opening up inhospitable new lands for the nation, he was used to a joyous welcome home.

This time was different.

That night, Yevgenov's wife Natalya, his mother-in-law and their 13-year-old daughter Irina stood in silence as the NKVD men searched Yevgenov's study, while their eight-year-old son Dmitry cowered in his bedroom.

The NKVD men took Yevgenov away to a detention center, where he was badly beaten, leaving his hip permanently damaged. He was sent to a labor camp in the far north for five years on trumped-up charges of spying.

"We are all trying to find some logic to the actions of the Soviet repressive machine," said the late Sergei Larkov of the human rights group Memorial, who together with Fyodor Romanenko of Moscow State University's geography department authored a book about the tragic fate of Soviet polar explorers titled "Enemies of the People Inside the Arctic Circle." 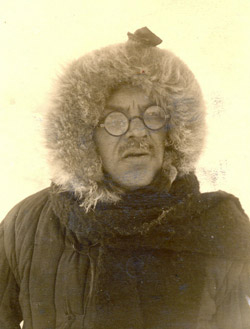 Yevgenov on his final expedition.

"There was no logic," Larkov, who died in August, said in an earlier interview at his home in Moscow. "There is no point in asking what a person was convicted for. It's absurd. A person could be convicted for anything, but it would have no relation to the truth."

Yevgenov got off relatively lightly, emerging from the camps after serving his sentence, albeit with health problems.

Rudolf Samoilovich, the Jewish deputy director of the All-Union Arctic Institute in Leningrad who had led the famous rescue expedition on the Krasin icebreaker to save the crew of an Italian airship that had crashed on Arctic ice in 1928, suffered a worse fate.

In May 1938, Samoilovich was staying at a sunny holiday resort in Pyatigorsk, southern Russia, when the secret police picked him up. A year later, he was shot in Moscow.

Approximately 1,300 polar explorers and people associated with the Arctic were arrested during Stalin's purges, according to Larkov.

Among them were large numbers of staff at Samoilovich's workplace, now called the Arctic and Antarctic Research Institute, whose scientists hit the headlines several years ago after penetrating four kilometers of ice to reach Lake Vostok, a body of water that has been sealed off from the rest of the world for more than ten million years.

Many staff members at Yevgenov's Hydrographic Directorate of the Administration of the Northern Sea Route were also targeted. Some were cooks at polar research stations; others, like Samoilovich, represented the finest scientific brains in the country.

Larkov said he believed that at least 40 percent of the 1,300 who were arrested were executed. Others died in the camps. Typical sentences were about 10 years.

Dr. Lev Savatyugin, a septuagenarian senior scientific researcher at the polar regions geography department at the Arctic and Antarctic Institute, said that in the 1930s, the scientists at his institute simply had to watch as their colleagues were taken away, knowing full well that they were not guilty of the crimes of which they were accused.

"A German spy, a Japanese spy … of course, in their souls, no one believed it, but fighting back was impossible," he said. "If you tried, then you knew they'd come for you the next day and take you away. So everyone kept silent, although everyone knew: How many spies could there possibly be in the country?"

Yevgenov's daughter Irina, a former physicist, lived in St. Petersburg until her death in September at the age of 89. A petite woman with dancing eyes, she said her father spent his years in the camps cutting timber, making shoes and painting dominoes. Finally, he was moved to a field of work closer to his specialization: as a meteorologist, advising on plans for a major new railway to Vorkuta in the far north.

Yevgenov lost his health during his time in the Gulag, and afterward could no longer go on his beloved expeditions, his daughter said, though she distinctly remembered him telling her about his other-worldly Arctic adventures.

In 1937, Yevgenov and his crew got stuck in the Arctic over New Year's, so they tried to cheer themselves up by making each other gifts. Yevgenov received a writing desk fashioned out of cardboard, with special drawers for his spectacles and other belongings. 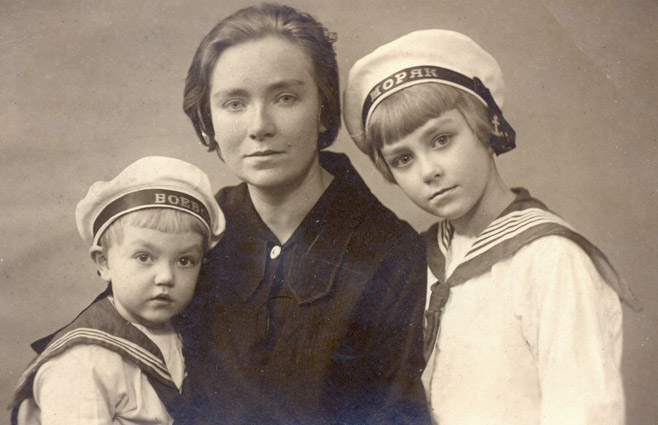 Yevgenov's wife Natalia with her young children Irina and Dmitry  in 1931.

Irina also vividly remembered him describing the colors in the polar landscape.

"I asked, how come it's colorful?" she recalled. "It's all white, just white and more white. "What is amazing is that this white silence is nevertheless colored in various tones, because the white reflects the light — not only the light of the aurora borealis, but the moonlight. He said many times: 'It's all very colorful there.'

"And he would say that whispers come from the ice that are made by the wind."

After years of being labeled traitors, the names of Soviet polar explorers have gradually been cleared due to work by activists and scientists. In 1988 — 50 years after he was arrested — Samoilovich was posthumously rehabilitated.

The legacy of Soviet Arctic explorers also lives on in other ways today.

The research stations built in the white stretches of the Arctic were constructed, according to Savatyugin, mainly by prisoners in the 1930s. Some of them were professors from top universities.

This article has been amended to clarify that Irina Yevgenova and Sergei Larkov have died since they were interviewed for the story, and that the name of Yevgenov's son was Dmitry, not Alexei.

3 Soviet-era nuclear submarines currently lie at the bottom of the Arctic.
Ongoing Battle