Political cartoons are usually satirical, filled with often grotesque caricatures parodying those in power, but that's not what the Young Guard, the youth wing of the ruling United Russia party, wanted. Instead, "No Filters," a one-day Moscow art show, featured patriotic caricatures dedicated to President Vladimir Putin.

The cartoons do not pull any punches with their love for Putin or antagonism of the United States.

A huge painting by art studio Attack, the first piece that everyone sees when entering the exhibit, has Putin in dark sunglasses, looking more like an action hero or rock star than a president.

"[This exhibition] shows that we're proud of our president, proud of our country," Oksana Tkachyova, head of the Young Guard's press service, told The Moscow Times.

The free show, held at the Flacon art and design center on Friday, featured over 100 artists' illustrations and paintings, a number of which had already gained widespread popularity after going viral on the Internet.

"Before, [the president] didn't really interest me. Even now I'm not really interested in politics, but these events [in Ukraine and Crimea] were so big they evoked a reaction, an emotion," said Podvitsky.

One of Podvitsky's caricatures shows a map of North Africa, the Middle East and Europe. Western Europe appears to be in mayhem, Ebola has taken over Africa, and Islamic extremism runs rampant in the Middle East. In Russia, a cat sits calm, content and safe amid the turmoil on all sides.

The caricature is Podvitsky's attempt at showing what he thinks of the idea that life in Russia is difficult and the people are unhappy. Russians are quite calm, he said.

"But it's meant to be a joke," he added quickly. "You've chosen the most grotesque one."

Indeed, his other illustrations are less confrontational. One image shows a pair of hands holding a small flower painted in the colors of the Russian flag with the caption, "Love your flag."

The exhibit comes as part of the wave of patriotic fervor that has gripped the country since Russia annexed Crimea, and the West imposed sanctions over Russia's role in the Ukraine conflict. 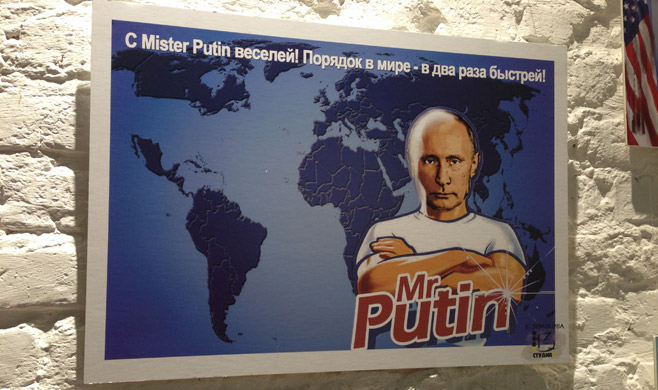 A parody ad saying "Mr. Putin" can clean up the world "twice as fast."

Putin's approval ratings have soared, and there have been a number of initiatives to show support for him and for Russia's policies, such as the shop that opened in central Moscow selling T-shirts with Putin on them.

The caricature exhibit is the first step in establishing the Young Guard's special award for the best Russian artists and caricaturists on the Internet, organizers said.

Podvitsky said his aim was to produce illustrations that would appeal to "ordinary people" who wanted to see images that felt true to their experience. Based on the positive feedback he has received, people seem to like it. "They see [my art] and think, 'Yes, I thought so too.'"

"Everything you see, everything I drew, I actually think that. It's not that someone commissioned this work," he said. "[In my cartoons] there is the grotesque, irony, humor, but no lies, from the point of view of a Russian person."

Others don't pull their punches in attacking the United States or its president, Barack Obama, at the exhibit.

One shows Putin pulling a sword behind Obama as he makes a speech. Obama's nose is long and wooden, with a leaf growing out of it, like Pinocchio.

Somewhat less aggressive is a picture that has Putin taking a selfie in the Oval Office in the U.S. White House as Obama takes a nap at his desk.

The few visitors who visited the exhibit Friday afternoon generally liked the show.

"It's so creative," said Alexander Musheron, an engineering student. "All [the works] are so different."

By mid-afternoon the Young Guard said they had already been asked to take the show across Russia, including to Khabarovsk in the Far East, Crimea and Nizhny Novgorod.