KIEV — The preliminary results of a snap parliamentary election Sunday showed Ukrainians voting firmly for pro-European parties, with President Petro Poroshenko's political bloc in the lead with 23 percent of the votes.

Exit polls put Prime Minister Arseniy Yatsenyuk's People's Front on 21.3 percent and a like-minded party, Selfhelp, on 13.2 percent, Reuters reported, while in a surprise result, the Communist Party failed to clear the 5 percent threshold for getting into parliament.

Former premier Yulia Tymoshenko's Batkivshchyna (Fatherland) Party had 5.6 percent, less than many had expected. The Opposition Bloc, led by an ally of ousted President Viktor Yanukovych, had 7.6 percent.

The mood in the capital was patriotic — with numerous yellow-and-blue flags flying from cars and balconies — but also pensive and subdued, with few polling stations experiencing the kind of crowding that occurred during the May presidential election.

At voting stations, many residents spoke of a kind of "politics fatigue" that has taken over Ukraine since an uneasy cease-fire was brokered between the Ukrainian army and pro-Russian rebels in the country's eastern Donbass region. There was no voting in rebel-held areas of the country.

"We keep choosing and choosing in order to survive," Anatoly, a former engineer turned truck driver in his 40s who declined to give his last name, told The Moscow Times. "It's nice that the democratic process in Ukraine actually exists. It's not so nice that it doesn't allow the country to achieve prosperity."

"You know what a happy country is?" he added. "One where people barely know who the president is. One where they're allowed not to care."

The two major issues on the minds of most voters The Moscow Times spoke to were the unity of Ukraine in the face of Russia's annexation of Crimea and the conflict in the Donbass region, closely followed by corruption.

Yulia Bondarenko, 23, told The Moscow Times that although she used to be an election monitor, she "didn't see the point" this time around.

"We had a revolution, then Crimea was stolen, then war broke out. Thousands of people are now dead: I care more about self-defense now than I do about voting," Bondarenko told The Moscow Times. "I want to learn how to shoot. I want to learn how to defend myself. We're talking about survival now. We're not talking politics."

Not everyone took such a grim view. Sergei, a pensioner who declined to give his last name, told The Moscow Times that people should have expected that times would remain tough in Ukraine for quite a while.

"It's going to take a really long time for this country to be a normal country," Sergei said. "I probably won't live to see that day. But my grandchildren might. That's why I supported [the] Euromaidan [protest movement ultimately responsible for the ouster of Yanukovych], and that's why I came out to vote."

Lyudmila, a disabled woman in her 60s, made a point of walking to her local polling station with the help of her friend, Alexander. "If you're disabled, you can technically vote at home. They're supposed to come over with your ballot," Lyudmila told The Moscow Times. "But there has been so much vote fraud in years past that I can't take the chance — I feel safer walking here myself, even if it takes me a long time. I'm here because I'm a believer in civilization. I'm old enough to remember the Soviet days, so I care more about my right to vote than perhaps some other people do."

Her companion Alexander, who was in his 40s and also declined to give his last name, had less enthusiasm for the democratic process.

"My entire family is in Kramatorsk. None of them wants to leave — they say, 'If we die, we die,'" Alexander said, speaking of a city in the Donetsk region that has seen heavy fighting in the conflict. The city is currently under government control, and Poroshenko paid it a surprise visit on election day. "They are in danger every day, and here I am in Kiev, working to help support them, and you know what? The cops still take bribes," Alexander complained. "Nothing has changed. People are dying in this country, but nothing has changed, so what's the point of voting?" 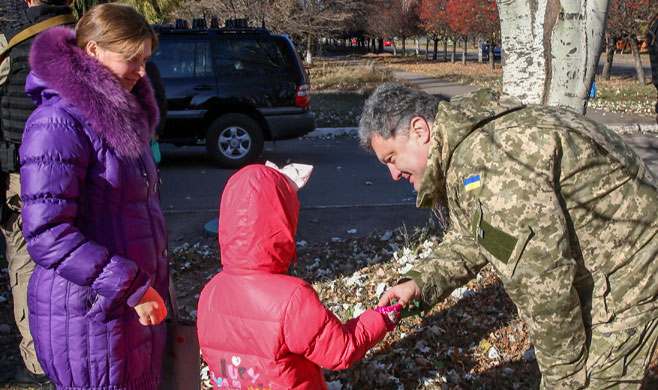 While Russian state media have depicted Kiev as a hotbed of anti-Russian extremism in recent months, there was little evidence of anti-Russian sentiment among average people in the city over the weekend. Most of the people who spoke to The Moscow Times had harsh words to say about Russian President Vladimir Putin, whom they accused of having an aggressive stance on Ukraine, but expressed little anger about the Russian people.

"It seems that Russians just watch too much TV," said Anatoly, the truck driver. "I think if more of them traveled here and actually saw what it's like in Kiev, they wouldn't support Putin's crazy policies nearly as much."

"I have Russian relatives, and we're all still on very good terms," Lyudmila said. "We may disagree sometimes, but try as they might, nobody is going to make us hate each other."

The night before the election, a young musician singing popular Russian-language songs was surrounded by a small crowd on Khreshchatyk, Kiev's central street. "I play the songs that people want to hear," the musician, who declined to give his name, told The Moscow Times. "As you can see, they keep requesting Russian bands tonight: Chaif, Kino and so on. They have no hatred for the Russian language or for Russian culture, though I keep hearing that [people in Moscow] think we've gone all barbaric here."

Rise of the Right

But the presence of the right wing in Kiev has undeniably increased in recent months — and not just in the form of political parties such as Svoboda and  Right Sector, the former of which looked set to enter parliament on the basis of exit polls. The right-wing Azov Battalion, for example, which has played an active part in the fighting in Ukraine's east, now has a prominent office right by Kiev's iconic Independence Square, with the door guarded by taciturn men in balaclavas.

Native Kievans take a philosophical view of the rise in right-wing sentiment.

"If the Russians were losing their lands left and right, they'd probably get a little extreme as well," Anatoly said. "I've got no real love for the far-right guys — I mean, my grandmother was Jewish — but I can see where they're coming from. When blood is being spilled, those images just go to people's heads. People start thinking in different, harsher terms."

Most local voters were far more keen to discuss day-to-day life, and corruption kept coming up over and over again. Though the state of Ukraine's economy is dire, few people wanted to discuss it, apparently seeing it in abstract terms. Yet the constant hassle of bribes and lack of transparency seemed to be on everyone's minds.

"Corruption means that people disrespect each other," Sergei said. "If you're an official and you're taking bribes, you disrespect the people who put you in office. There is something humiliating about it. … And then we wonder why it was so easy for Russia to come in and support a rebellion in the east. Corruption there is even worse. And corruption means you can't have a normal, strong community that can withstand all of the [expletive] that has been happening in the Donbass."

Dmitry Nikulshin, head of the Batkivshchyna Party in Kiev's working-class neighborhood of Borschahivka, said corruption in Ukraine can only be combated on a procedural level, not by targeting individuals.

"You need a systemic approach, a mechanism," he said. "I've traveled to Georgia, I've seen how they do it there. They change procedures, make everything more transparent. … If you think that younger politicians will be able to come in and solve anything simply by being younger or outside of the current establishment, you're wrong. They will just fall under the influence of the establishment."

Natalia Antonova is a Washington based writer and editor.  @NataliaAntonova

Natalia Antonova is a Washington based writer and editor.  @NataliaAntonova

Ukraine's prime minister warned on Thursday of possible attempts by Russia to disrupt an election in Ukraine on the weekend, a vote being held against...
reducing activity

Moscow had warned of a "humanitarian crisis" on the Svalbard archipelago after Oslo halted a shipment headed for the islands.