Yelena Gremina, having just informed the world that her mighty little Teatr.doc was in danger of being evicted from its famous basement in the center of Moscow, added a second post on her Facebook timeline. This time it was a quote of Moscow Mayor Sergei Sobyanin, drawn from an interview with Ekho Moskvy radio.

"I've never heard about Teatr.doc and its problems," said Mayor Sobyanin, "but basically there are many theaters in Moscow doing God-knows-what."

Perhaps it just wasn't Sobyanin's best moment. In any case, the mayor guaranteed himself getting an education.

Gremina's and Sobyanin's comments were brought about by the news, on Oct. 15, that Moscow's Property Department had unilaterally and secretly terminated its rental agreement with Teatr.doc on Tryokhprudny Pereulok. I say "secretly," because the act was reportedly signed May 5, 2014, but the department said nothing to Teatr.doc and — here's a nice twist — continued to accept rental payments until the current month of October.

A reporter at Gazeta.ru stumbled upon this information and asked Gremina, one of the co-founders of Teatr.doc, what she thought about it, thus elevating secret intrigue to the status of public scandal.

Within hours, social media and the Russian theater community were abuzz. Was this a political act? Was it ordered from on high? If so, how high? Was this the first attempt to censor the non-governmental, independent theater, which has gained world fame as a space that tackles controversial political and social topics?

The property department hurriedly put out press releases stating that Teatr.doc violated renovation rules about structural changes. Gremina replied that the only structural changes were done at the request, and under the supervision, of the Moscow fire inspector — an extra exit door was added where a window had once been.

Doc, as the theater is known in common parlance, was given 30 days to vacate the space, which had become synonymous with innovation, courage and integrity. Since its founding in 2002, the little black basement tucked into a small courtyard a few blocks from Pushkin Square has hosted theater festivals, film festivals, play development festivals, produced over 70 plays, mounted thousands of play readings giving life to new plays, and has launched the careers of dozens of major playwrights, directors and actors.

Playwright and director Mikhail Ugarov, Gremina's husband and a co-founder of Doc, spoke to OpenRussia.org later the same day, declaring he believes the decision to evict Doc was taken "on purpose," that is, to translate: in order to close the theater or, at least, make life difficult for it.

In an interview with Anton Elin of Gazeta.ru on Friday, Ugarov said: "We have big problems because everybody knows who sent these people after us, but we can't name their names. That's why the whole chain of middlemen was created. You say anything, they'll railroad you."

"It's worth putting up a fight," Ugarov told OpenRussia.org, "but a legal battle will be impossible. You can only fight by making noise, rousing public opinion, appealing to the importance of the problem."

In the spirit of transparency, I must declare a potential conflict of interest. My wife Oksana Mysina and I took Ugarov at his word. Oksana wrote a Russian-language open letter in support of Teatr.doc and began collecting signatures. I wrote a letter in English and did the same. As of Sunday afternoon, Oksana's efforts had garnered 4,400 signatures on Change.org. My direct mail effort had collected 325 signatures from 31 countries. 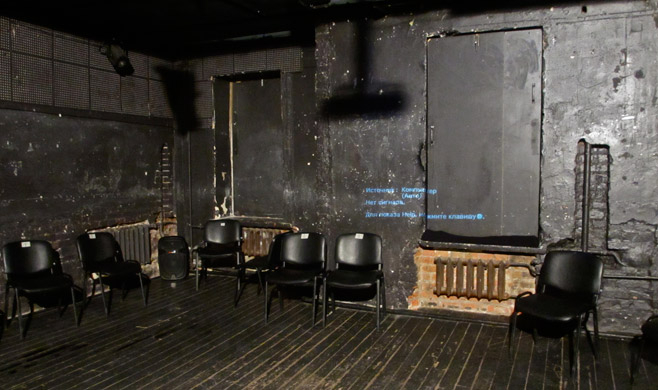 The black-box stage in Doc's basement. The theater is facing closure.

Elyse Dodgson, the international director of London's Royal Court Theatre, wrote: "The work of Theatre.Doc is at the heart of the entire Royal Court International Initiative. We would not have thrived in the work we do over these last 15 years if it was not for Theatre.Doc and their inspiration as the major force in Russian new writing. Theatre.Doc must survive!"

Monika Greenleaf, a professor of Slavic at Stanford University, wrote: "I discovered Teatr.doc in 2007 with its brilliantly imaginative, 'poor theater' production of Yury Klavdiyev's 'I Am the Machine Gunner,' and always run to its door when I need an infusion of thought-provoking and exuberantly experimental dramaturgy and performance. … We all know that the theater world without Teatr.doc will lose a vital organ for breathing."

The entire company of the Variant Drama Theater of Pervouralsk — 40 people in all — sent their mutual best wishes of support.

At present a battle is clearly in place. Gremina was prominently seen taking a friendly stroll with Sobyanin's culture minister Sergei Kapkov at the "Culture, A Glance to the Future" forum at the Manezh on Friday. Sobyanin himself was quoted on Ekho Moskvy as saying he would "get to the bottom" of the affair.

Meanwhile, Moscow's Property Department announced that it plans to go ahead with a measure that would turn the Teatr.doc basement space over to the residents of the building.

"This theater is a memorial," Ugarov told Gazeta.ru. "Serebrennikov, Vyrypayev, Kurochkin built it with their own hands. For me it is a part of history that is worthy of the Bakhrushin Museum. … Another space is bad for the theater. We all know what happened as soon as Meyerhold lost his building and they began building him another — he was thrown face down on the floor and was beaten with rubber truncheons."