A young Russian couple who has named their baby Lucifer has outraged relatives and Orthodox activists, with some calling for child welfare services to take the boy away and place him in a Christian family.

A registry agency official in the Siberian region of Perm, where the boy was born last month, said it was the least common baby name her office ever had to put on a birth certificate, but the parents refused to be dissuaded, TASS reported Wednesday.

"We talked with them, told them that it would be uncomfortable for a child with a name like that in modern society, but the parents insisted," the official, Tatyana Tuzhilina, was quoted as saying.

"Besides, we have no legal grounds to ban registering a baby with such a name," she told TASS.

The parents, who describe themselves as Satanists, consider the name a "symbol of free thought, pride and intellect," the boy's mother, Natalya Menshikova, told TASS, adding that if the boy was unhappy with his name, he will have the legal right to change it when he reaches the age of 14.

"A stereotype has been promoted in our society that Satanism is supposedly vandalism, listening to hard music and drinking, but that's not the case," she was quoted as saying.

The name Lucifer derives from Latin words that mean "light-bringing" and had once been used to signify a "morning star," but has long been seen by many Christian believers as synonymous with Satan. 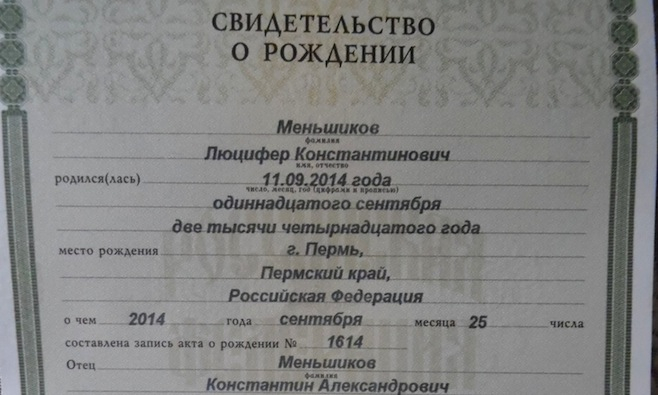 Menshikova said the name was a tribute for the boy's survival after a complicated birth.

"During pregnancy, I did not lead the healthiest lifestyle, so childbirth was difficult," she was quoted as saying. "I promised that I would name the baby Lucifer if he survived, because he was born with major asphyxia."

Family members, however, were "horrified," she said, while the leader of a Christian organization called for taking the boy away.

"Satanists called a baby Lucifer," Dmitry Enteo, the head of God's Will movement, said via Twitter. "We will send a request to child welfare and have him handed over to an Orthodox family, where after christening his name will be Mikhail."

A spokesman for the Perm region branch of the Russian Orthodox Church said the church would be willing to baptize the boy, but only to give him "the name of a saint, not the devil," TASS reported.

Another Russian baby who received an unusual name recently was a girl born last New Year's Eve, about a month before the start of the Winter Games in Sochi, and named Olimpiyada — the Russian word for Olympics — Russian media reported.

Naming babies after the country's accomplishments or social ideals was also a popular practice early during the Soviet era, occasionally producing such extravagant monikers as Traktor (tractor) and Revolyutsiya (revolution.)

At least four Russian airliners made emergency landings in the past 48 hours — three after experiencing technical problems and the fourth when a woman...
deadly strikes