As Moscow's weather gradually cools down, the temperature of political discourse is definitely heating up.

A public spat over the place in history of novelist and historian Alexander Solzhenitsyn led last week to some fighting words that culminated with a popular actor, Yevgeny Mironov, slinging rhetorical mud at a prominent editor and writer, Yury Polyakov, and drawing cheers from many for the deed. 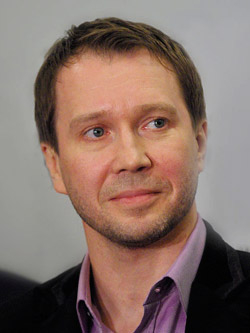 Calling Mironov's salvo a "first sign" of change, Rudnev added, "I hope that the actor's word will melt the conspiracy of silence among the leading figures of Russian theater in regards to what is happening in the country, and primarily, in culture. Everybody is silent. They see and they are silent. Lev Dodin alone has spoken out against censorship. He alone."

It was a lovely, time-honored Russian lexical item that prompted Rudnev's and others' enthusiastic outbursts. Mironov, castigating Polyakov for what he perceived to be the writer's insult of Solzhenitsyn's widow Natalya Solzhenitsyna, pulled out that muscular, versatile old word "podlets." Translate it as you will — the Multitran.ru site suggests "scoundrel," "heel" and "skunk" for starters — it is a word that in the days of Pushkin and Lermontov would have justified a duel.

One trusts that Mironov, artistic director of the Theater of Nations, and Polyakov, editor-in-chief of Literaturnaya Gazeta, will not meet at dawn in a dew-covered field anytime soon. But the resounding crack of the slap has been heard.

Polyakov's original comments about Solzhenitsyn, suggesting that he "left" the Soviet Union, rather than being stripped of his citizenship and deported, and that he "essentially appealed to the Americans to begin a war" against the Soviet Union, were made on the now obscure Kultura newspaper website on Sept. 20. Once a major source of information about the arts, Kultura, like Polyakov's Literaturnaya Gazeta, has devolved into a radical pro-Kremlin mouthpiece in recent years. Few people read either paper anymore, and most visitors reach their websites only by accident.

Thus it was that Natalya Solzhenitsyna responded to Polyakov's claims only five days later, in an open letter published Sept. 25 on the website of Rossiiskaya Gazeta.

Solzhenitsyna declared that if Polyakov wrote what he did knowing that her late husband had been forcibly deported, "you are lying on purpose. If, however, you aren't aware of this universally known fact (at least in the history of 20th-century literature), then it is strange that you head Literaturnaya Gazeta."

Referring to Polyakov's claim that Solzhenitsyn encouraged the United States to start war with the Soviet Union, Solzhenitsyna added that it was "unbecoming" of Polyakov "to repeat accusations originally made by the fifth bureau of the KGB" in their battle against Solzhenitsyn. 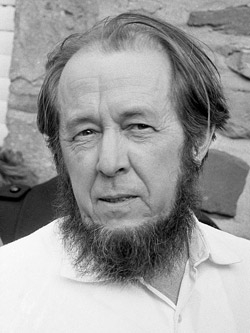 In his response to Solzhenitsyn's widow in the same series of posts in Rossiiskaya Gazeta, Polyakov sought to appease his opponent, repeatedly calling Solzhenitsyn a great figure who is worthy of "respect and emulation."

But something got the better of the editor, and he could not refrain from adding in the middle of his mea culpa, that "because of Solzhenitsyn's virulent hatred of the Soviet version of our history, I am inclined to believe the fifth bureau of the KGB."

Surely this was the phrase that inspired Mironov to accuse Polyakov on Friday of "insulting a noble woman" and to apply that epithet of "scoundrel" to the guilty party.

The turn of events is made even more interesting by the fact that in 2011 Mironov bowed and scraped before Russian President Vladimir Putin when the latter paid a surprise visit to the newly renovated Theater of Nations. At the time tongues wagged about how theater personnel scrambled to find a piano when the honored guest intimated he would play a tune.

This, then, is what really makes the recent flap look like it could be a wavelet in a potential sea change. For years, while Putin's policies have grown increasingly repressive — going as far as threatening five-year prison sentences for anyone expressing doubt about the official version of World War II — high-profile supporters of Putin's policies have remained silent. Or they have backed them publicly. Mironov was one of dozens of theater and film stars to record videos urging Russians to vote for Putin in 2012.

By taking on one of Putin's most loyal friends in the cultural press, he appears to have broken with his actions and words of recent years. Only time will tell if this event is an aberration or a turning point.