Muscovites were treated to a rare screening of the 1928 silent comedy "The House on Trubnaya," directed by Boris Barnet, a film little known but ranked with Eisenstein's "Battleship Potemkin" as one of the landmark Soviet silent films.

Naum Kleiman, the director of Russia's Cinema Museum, said Barnet's comedy "expresses its epoch no less than the most renowned films in the history of cinema."

The movie tells the tale of Parashka, a naive country girl, who arrives in Moscow during the uncertain days of the New Economic Policy, or NEP, when the Soviet government experimented with state capitalism. In her attempts to navigate the capital, she is exploited by a parodied bourgeois couple before developing a healthy, proletarian political consciousness.

The film neither avoids the political reality of the day nor proselytizes about it, but depicts it with characteristic levity.

"Are you in a union?" a potential employer asks the film's demure protagonist. "No," she replies, "I'm a virgin."

"In this film, Barnet found a balance between the social, the lyrical, and the personal," Kleiman says. Among his avant-garde contemporaries, Barnet stood out for his emphasis on emotion and everyday human life. Kleiman compares Barnet's work to that of Eisenstein.

"'Potemkin' and 'The House on Trubnaya' are the two banks between which all of Russian cinema flowed," he says. "Eisenstein represents the cosmic perspective, Barnet the human."

Barnet's circuitous path to filmmaking included a stint in the Red Army, as well as time spent as a boxer, acrobat, and clown. He remained productive throughout disparate periods in Soviet history, from the idealistic, tumultuous 1920s through the dark days of Stalinism and into Khruschev's post-war thaw. His career was no less eclectic. An exuberant omnivore, Barnet was adept at directing musicals, war films, comedies, and tragedies — sometimes within a single movie.

More than any of his contemporaries, Barnet films the human body with interest and affection. In contrast with the more mechanical, exaggerated acting style favored by Eisenstein, Barnet tends toward naturalism and depicts his characters' emotional faces with evident pleasure. In "The House on Trubnaya," his compositions are packed with people and buzzing with movement, showcasing both the dynamism of the times and Barnet's own athletic verve.

"The House on Trubnaya" still makes an impression. U.S. critic Dave Kehr, wrote that "it displays a superb technique, a grace with actors, and a talent for eccentric characterization that suggest [screwball comedy director] Leo McCarey more than Karl Marx." In 2000, the Russian guild of film critics placed it amongst the country's 100 greatest films. 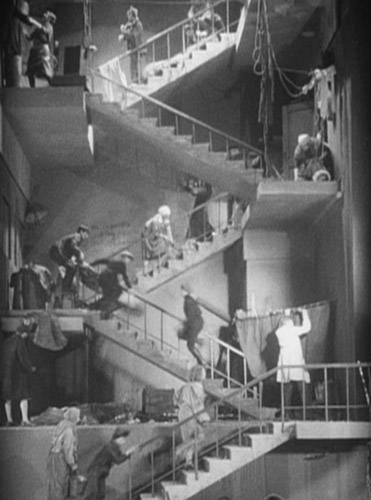 "The House on Trubnaya" is a silent comedy directed by Boris Barnet.

Following "The House on Trubnaya," Barnet successfully transitioned into sound cinema. He came into the height of his powers only after the onset of Stalinism. The experimental anti-war film "Outskirts" (1933) put him on the wrong side of the censors. To follow it, Barnet went to the Caspian Sea, where he made the sensual musical "By the Bluest of Seas" (1936).

Two of the New Wave directors were full of praise for Barnet. Jacques Rivette deemed him "the best Soviet director after Eisenstein" while Jean-Luc Godard said, "not being a fool, one must have a heart of stone to recoil from Barnet."

Domestically, his influence was slim but potent. Georgian director Otar Iosseliani, crafter of exquisite tragicomedies, wrote, "he was a poet at a time when cinema had thrown out all it's simple unmannered poets in order to implant mannerism… [his films] were ironic and even carried their propaganda well: 'Things are bad,' they said, 'but they will improve and this will only be temporary.'"

Unappreciated by a new generation and anxious about the possibility of losing his ability, Barnet took his own life in 1965, at the age of 63. Kleiman deems his untimely death "the greatest tragedy in Russian cinema."

The screening was accompanied by a quartet of musicians brought together by Norway's Tromso International Film Festival, which sponsored the event alongside the Cinema Museum. Norwegian musicians Bernt Simen Lund and Erik Stiffjell began work with Russians Arkady Shilkoper and Yekaterina Yefromova only five days before the program premiered at the festival. "Nothing was prepared," says Lund, "the idea was to start off day one with a clean slate and work our way through [the film]."

The resulting score befits Barnet's madcap film, employing live and recorded electronics alongside tuneful folk melodies. In line with the film's Soviet roots, the musicians produce the sounds of labor taking place within the film, chopping wood on stage and slapping hanging rugs with wooden sticks. "It's not just sound effects," says Shilkoper, "it's a composition, a small symphony."

If the audience's enthusiastic reaction was any indication, Barnet's revival may already be under way. In the West, "The House on Trubnaya" has been released by Flicker Alley as part of the box-set, "Landmarks of Early Soviet Film," which also contains Barnet's first film, the serial "Miss Mend" (1926), co-directed with Fyodor Otsep, as well as his first screen appearance in Lev Kuleshov's "Mr. West in the Land of the Bolsheviks" (1924).