Socialite, blogger, nouveau riche, poetess, amateur musician, self-professed "dilettante painter" and the most high-profile corruption suspect in Russia, Yevgenia Vasilyeva showed up in court Monday wearing a T-shirt with her own face on it.

She brooded throughout the hearing, at which a witness linked the former defense minister — Vasilyeva's alleged ex-boyfriend — to what the prosecution said were fraud schemes that cost the state 3 billion rubles ($85 million).

But the eccentric ex-businesswoman has run a gamut of moods during her two-year investigation and trial, from welling up in front of the cameras to gaily advertising an exhibit of artworks she created under house arrest.

Vasilyeva, 35, is possibly the most controversial public figure in Russia at the moment.

Graft allegations and a sybarite lifestyle, widely and unsympathetically covered by mainstream state media, have given her a public image comprising every negative stereotype about the Russian elite.

But Vasilyeva has taken on the critics and fought hard to present herself as a hounded artiste and victim of a clandestine turf war in the Kremlin — and perhaps a star-crossed lover at that.

The story is far from over, and it is too soon to sort out the mess of kitsch, romance and state contracts, but it has at least already offered a rare glimpse into the private life of Russia's creme de la creme.

Vasilyeva declined to speak to the press Monday. Her lawyer said an interview was possible at some later point in the trial, expected to last at least six more months, but gave no time frame.

Vasilyeva is the only daughter of a self-proclaimed multimillionaire from St. Petersburg who made his fortune in optic fibers and plastic piping.

She got her start as a corporate lawyer in the 2000s and worked in Moscow's lucrative construction sector.

But the defining moment of her professional biography came in 2010, when she became an adviser to Russia's first civilian defense minister, Anatoly Serdyukov.

Serdyukov, a member of President Vladimir Putin's inner circle, was in 2007 given the thankless task of revamping the obsolete and mismanaged Russian military.

Part of the reform included outsourcing service and maintenance to civilian companies, such as Oboronservis, that were overseen by Vasilyeva.

The duo was reviled by the generalship, some of whom Vasilyeva reportedly drove to tears with her criticism — claims she denies.

They were also reported to have begun an affair, leading Serdyukov to leave his wife, the daughter of another Putin affiliate, then-First Deputy Prime Minister Viktor Zubkov: a dangerous enemy to have.

Serdyukov fell from grace in 2012 when he was sacked and found himself, along with affiliates, at the business end of the biggest corruption case of Putin's era to involve state officials over alleged embezzlement at Oboronservis and other companies.

The case was hailed at the time as the start of a much anticipated anti-corruption campaign. But the minister was eventually let off the hook under a state amnesty, shortly after he was officially charged with criminal negligence. Several of his lower-ranking aides got mild sentences, and a few others — including Vasilyeva — are still on trial.

"I think the charges are … unfounded, baseless and biased," Vasilyeva, who faces up to 12 years in jail on 12 counts of fraud, money laundering and exceeding and abusing her authority, told the Vedomosti newspaper.

It was the anti-corruption campaign — seen at the time as a vital rating booster for the newly re-elected Putin — that made Vasilyeva a celebrity, albeit somewhat of a tabloid-style figure.

The leading state channels, whose coverage is believed to be closely directed by the Kremlin, relished in reports about Vasilyeva's alleged wrongdoings.

Notorious journalist Arkady Mamontov, known for his scathing propagandist TV exposОs of the Kremlin's opponents, said in 2012 that 1,500 jewelry items worth a combined $3 million were found in her luxurious apartment on Moscow's "Golden Mile" around Ulitsa Ostozhenka.

Vasilyeva later said the accessories were really imitations for her planned jewelry store and claimed to have faced pressure to pin the blame on Serdyukov — who, in the meantime, was said to have returned to his wife. 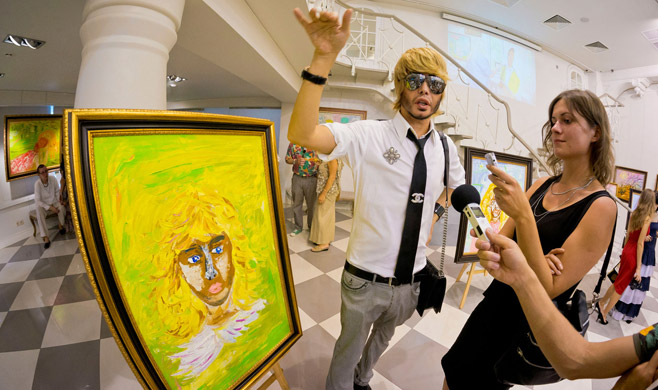 Celebrity hairdresser Sergei Zverev posing with Vasilyeva’s portrait of him at an exhibit of her work last month.

The usual route for corruption suspects in Russia is to keep as low a profile as possible. This was the strategy employed by Serdyukov, among others.

Vasilyeva, however, broke rank to take a different approach, repeatedly decrying the case to the media as having been fabricated by Serdyukov's enemies.

She was also the only one to retaliate through art. Having once published a book of romantic poetry, Vasilyeva narrated her criminal case in verse that the eminent Russian writer Viktor Yerofeyev called "doggerel."

She also took to painting, with the "primitivism" tag applied to her artwork failing to deter the self-professed "dilettante" from holding two exhibits so far and setting up a third for September.

Topics include famous people — up to U.S. President Barack Obama — cats and herself. One painting depicted Vasilyeva with an epaulette nailed to her bare shoulder. She posts many of her works on Instagram.

The heavy-jowled blonde, who admitted to Tatler Russia magazine in May to having plumped up somewhat during her home confinement, also rolled out a pop/rap video in June called "For Nothing," featuring lovelorn lyrics delivered over copious imagery of Serdyukov.

Her musical career is still in its budding stages: She said last month that she was writing a musical "based on real events."

Critics have alleged that Vasilyeva's artistic forays are a PR stunt calculated to present a more sympathetic face to the public.

But Russian power figures have dabbled in the arts before. The almighty KGB chief Yury Andropov was an amateur poet, and former Kremlin propaganda chief Vladislav Surkov recorded a musical album with a domestic goth rock star and wrote two novels under a pseudonym.

Vasilyeva is really just following an artistic streak inherent to many people, though that does not necessarily imply talent, said Olga Kryshtanovskaya, an expert on Russian elites at the Russian Academy of Sciences.

"It's a certain female type in the elites. As soon as they come to power, they become something of a poet, a designer, a traveler, all at once," Kryshtanovskaya told The Moscow Times on Monday.

And Vasilyeva's case is a long-running saga with ever-changing goals, said Yelena Panfilova, the longtime head of Transparency International Russia.

"It started as a show trial, then morphed into an internal struggle of the elites, a PR initiative, and now it looks like … she is about to get away with a symbolic sentence and the image of a victim of injustice," Panfilova said.

Russia was 127th of 175 countries in Transparency International's latest Corruption Perceptions Index, released last year. In 1999, the year before Putin came to power, it was 82nd.

"The anti-corruption campaign is ongoing, but sporadically and without focus," Panfilova said. "And other factors, such as the interests of power groups, only muddy the waters."