You guessed it. It is time for the annual Moscow Times Theater Awards. For the 22nd year running, I take a look back at why I will remember the last 11 months of theater.

Trend of the Year: Worry and confusion. Repressive laws banning obscenities in art and the articulation of historical narratives not sanctioned by the government. Parliamentarians attacking artists and theaters. Conservative groups protesting — even once interrupting — performances. It was a tinder box. Was this the fire or the spark of bigger conflagrations to come?

Event of the Year: The Jubilee Year, Taganka Theater. This series of productions, exhibits and discussions honoring the 50th anniversary of the house founded by Yury Lyubimov in 1964 was controversial. I want to say I don't know why, for it was executed brilliantly by the young team of artists and administrators chosen for the job by the city. But there were entrenched interests whose representatives did everything possible to ruin the events. Ultimately, they failed. See below for reasons why.

New Kids on the Block: The Dmitry Brusnikin Studio, Moscow Art Theater school. Under teacher Brusnikin, these future professionals have already had a serious impact on local theater with student shows "Circuit Breaker" and "The Devils."

Whipping Boy: The Gogol Center. Whenever any government official wanted attention, they unloaded on the Gogol Center or its artistic director Kirill Serebrennikov. They "lacked patriotism," they "defiled the classics" [whatever that means], they "promoted gay lifestyle." In other words, congratulations, Gogol Center. You are the city's most influential theater. 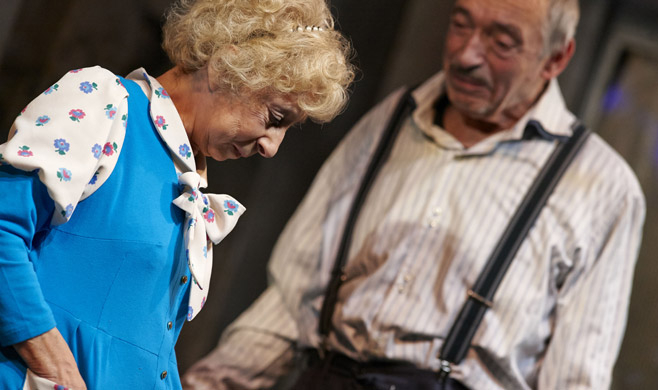 Two veterans on top, top form. Akhedzhakova and Gaft in "The Gin Game."

Best Actress: Tatyana Orlova as Rachel Kaptsan, a Jewish woman who survives a harrowing half of the 20th century in "Berdichev," Mayakovsky Theater. She was spectacularly grumpy, acid-tongued and easily offended, one of those quintessential cockeyed characters only a theater full of spectators could love.

Best Actor: Alexei Kravchenko as the corrupt, domineering police chief in "The Tale About What We Can and What We Can't," Moscow Art Theater. Kravchenko underplayed his role as might a granite cliff. Unforgettable in his ability to take command of an entire show when it seemed he did nothing at all.

No Second Fiddle: Timofei Tribuntsev as Iago in "Othello," Satirikon. Iago may not be the title role, but no one told Tribuntsev. A wicked performance of the pettiness of evil.

The Devil Undisguised: Igor Mirkurbanov as both Fyodor Karamazov and the Devil in Konstantin Bogomolov's production of "The Karamazovs," Moscow Art Theater. Mirkurbanov delivered sarcasm, bile, arrogance and a deep, uncomfortably veracious grasp of life's paradoxes.

Perfect Pair: Lia Akhedzhakova and Valentin Gaft as the dueling oldsters in "The Gin Game," Sovremennik. Perhaps the production fell short as a whole, but these two were a joy to watch.

Wonderful Whimsy: "Shakespeare Cafe," Shadow Theater. Spectators at five tables choose from two fabulous menus — of great food to eat, and great art to consume. Each table selects which Shakespeare masterpiece it wishes to see performed in five-minute, puppet versions. The result is a five-course evening that provides a happy belly and a satisfied mind. 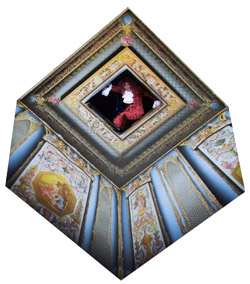 Disguise Deluxe: Makeup designer Tatyana Shmykova,"Honore de Balzac. Notes About Berdichev," School of Dramatic Art. In this mordant, comical take on "Three Sisters," Shmykova imagined Chekhov's characters as if they stood from their coffins, brushed off the dirt, straightened broken limbs and went back to living as usual.

Playwright of the Year: Mikhail Durnenkov. He took over the Lyubimovka play festival in September and breathed new life into it. His script for "The Tale About What We Can and What We Can't" at the Moscow Art Theater provided one of the most innovative shows of the first half of the season, while his "Victory Day" at the Taganka helped close the season on a high note.

Getting Real: Dmitry Volkostrelov with "Three Days in Hell," Theater of Nations, and "1968. Novy Mir," Taganka Theater. This gifted director continually finds ways to stage starkly innovative productions while employing all the tenets of hyperrealism. Are these shows slices of life or radically experimental? They're brilliant, I know that.

No Holds Barred: Kama Ginkas's "Lady Macbeth of Our District," Theater Yunogo Zritelya. Ginkas pulled no punches with Nikolai Leskov's tale of perfidy, adultery and unrepentant murders. A withering portrait of lives on a slippery slope leading to sin and death, his production compels us to watch actors' faces, to distinguish between a wry grimace and a sarcastic grin, thus seeing the nuances separating despair, doomed hope, defiance and rebellious abandon.

Most Innovative Design: Designer Carl Fillion's suspended cube in Robert Lepage's "Hamlet/Collage," Theater of Nations. The cube twisted and turned above the stage as designs, realistic and fantastic, were projected on its inner walls, creating an ever-changing, kaleidoscopic backdrop for the actor playing Hamlet. I thought the cube outplayed the actor, but the cube was amazing.

Designer No. 1: Ksenia Peretrukhina. Great designs for "The Tale About What We Can and What We Can't" at the Art Theater and "Three Days in Hell" at the Theater of Nations. Tremendous work throughout the Taganka's Jubilee Year, including her "manifesto" exhibit, "An Attempt at an Alternative," which used simple words, images and blank spaces to provoke questions and answers about the Taganka's place in Russian history. 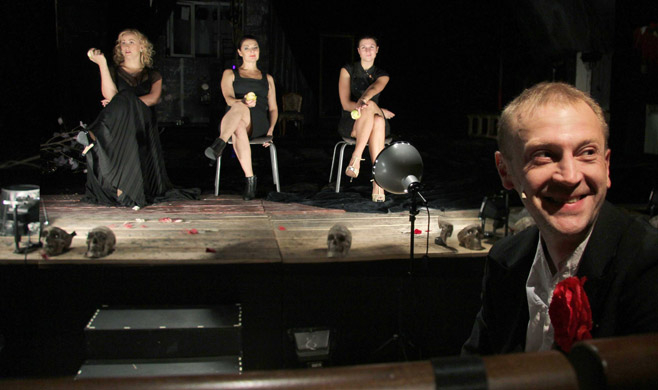 Timofei Tribuntsev, right, as Iago in "Othello" providing a "a wicked performance of the pettiness of evil."

Spectacular Revival: Semyon Alexandrovsky's "Presence," Taganka Theater. A magnificent idea executed nearly perfectly. Alexandrovsky segued live performances with historical, taped performances of Vladimir Vysotsky and other Taganka greats of the past in order to blend 50 years into a scintillating performance.

Delightfully "Defiled" Classics: Konstantin Bogomolov's "The Karamazovs," Moscow Art Theater, and Kirill Serebrennikov's "Dead Souls," Gogol Center. They infuriated the classics police and the intolerant, but these boldly creative, unabashedly contemporary takes on works by Fyodor Dostoevsky and Nikolai Gogol, respectively, proved that taking chances is the way of progress.

Best Production: Yury Muravitsky and "Papa Leaves, Mama Lies, Grandma Dies," Meyerhold Center. Muravitsky playfully unraveled 100 years of progressive theater in this beautiful, touching story of a family with common problems. Instead of breaking the fourth wall to come closer to the audience, he staged the show behind a plexiglass wall, challenging spectators to put effort into connecting with the story. I thought this piece was flawless.

Theater of the Year: Teatr.doc. Yelena Gremina, Mikhail Ugarov and their team at this tiny playhouse stood as tall as ever in this, their 12th season. They continued cranking out challenging, unusual theater, but their stand on the issues put them all alone among Moscow, even Russian, theaters. Teatr.doc declared it will defy new laws and will not censor its plays.

Personality of the Year: The Censor. Virtually every Russian critic proclaimed censorship the theme, event, topic, the whatever of the year. I'm there. But I personalize it, for this is not abstract, people are behind it. When shows are banned, it will be because specific individuals have taken it upon themselves to say they know best what an artist should do, and what an audience shall see. These people are among us. We see them, work with them daily. I'm just sayin'…