The Netherlands does not often declare days of national mourning. The last time it did so was in 1962, to honor the passing of the 82-year-old Queen Wilhelmina, inaugurated in the now distant year of 1898.

But July 23, 2014 commemorated a disaster on a far broader and modern scale: the death of the 193 Dutch passengers aboard Malaysia Airlines Flight MH17, shot down while flying above territory controlled by pro-Russian separatists in Ukraine.

This tragedy is only the second-biggest death toll in a plane crash to have ever hit the country. The disaster that tops the list — which left 248 Dutchmen dead when two planes collided on the Spanish island of Tenerife in 1977 — was attributed to human error.

This time, however, the Dutch are having to cope with the psychological complexity of not knowing, and possibly never finding out, who pushed the figurative button, two questions that have dominated political discourse and media coverage ever since MH17 was downed in the eastern Ukrainian town of Torez last Thursday.

But though an international probe into the incident has barely gotten under way, let alone been concluded, for the Dutch the culprit already has a face: Vladimir Putin.

While Putin has seen his approval ratings steeply rise so far this year, public opinion in the Netherlands has rapidly soured.

Last year was meant to celebrate ties between the two countries. The nations' shared history, after all, stretches all the way back to Tsar Peter the Great, who founded St. Petersburg on the model of Amsterdam. Putin's own daughter, Maria Putina, reportedly lives in Voorschoten with her Dutch boyfriend.

But the year was one of endless diplomatic disputes. 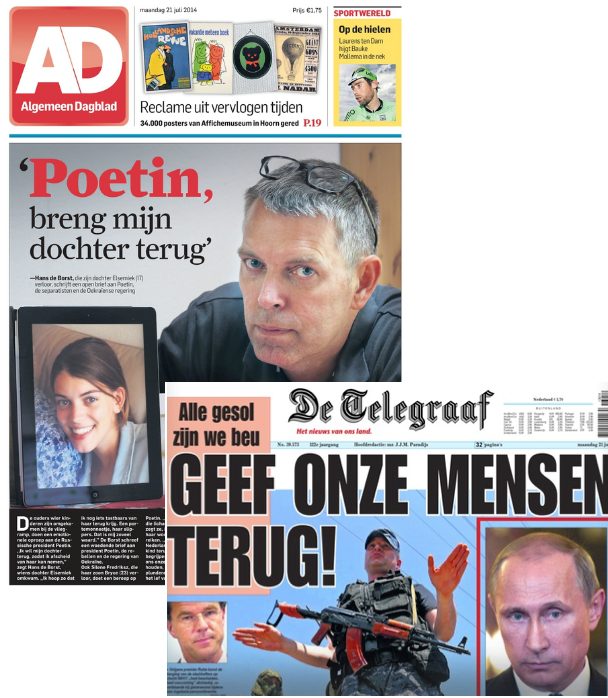 What started with the arrest of Greenpeace activists aboard the Dutch-registered vessel Arctic Sunrise was followed by Russian accusations that the Netherlands had breached the Geneva Convention by arresting a Russian diplomat in The Hague over child abuse charges.

The "celebratory" year culminated in the brutal beating of Dutch diplomat Onno Elderenbosch in Moscow amid Dutch calls to boycott the Sochi Olympic Games over Russia's gay propaganda law and fittingly ended with Russian activists pelting the Dutch royal couple with tomatoes during the year's closing concert in Moscow.

It was a celebration of difference rather than brotherhood between the two trade partners and, in retrospect, provided the ideal buildup to the dominant view in the Netherlands today that Russia is at best unreliable and at worst dangerous.

As photographs and obituaries of the victims of the Malaysia Airlines crash do their rounds on social media and in the press, the Dutch have been uncharacteristically unanimous in their demand that Putin clear up the mess they believe he created. Emblematic of this is the man who appeared on the front page of Dutch newspaper Algemeen Dagblad's Monday edition alongside the headline "Putin, bring back my daughter."

But amid the storm of outrage one person's voice stands out in its tentative carefulness: Dutch Prime Minister Mark Rutte.

Speaking in the Dutch parliament on Monday, Rutte appeared to get on board with EU and U.S. calls for further sanctions against Russia, but proceeded to take the sting out of the threat by adding there would first need to be proof that Russia was directly or indirectly responsible for downing the MH17.

With there being a real possibility such definitive proof will never emerge, Rutte's cautiousness has earned him criticism and scorn in the Netherlands for "cuddling up" to Putin in order to secure the country's business interests, which allow it to rake in billions of euros in exports a year.

But in all likelihood, Rutte is motivated not by a desire to protect Dutch trade interests but by his own feelings of powerlessness. Faced with the chilling images of bodies, likely Dutch, sticking out from high corn stalks, the question of what exactly to do next is a Pandora's box no one is willing to open, least of all the Dutch.

The possibility that President Vladimir Putin also might be out of his depth in Ukraine is a reality that the Dutch are not ready to bear quite yet.

Eva Hartog, a Dutch citizen, is the web editor of the Moscow Times.

Dmitry Peskov, the man charged with sharing President Vladimir Putin's views with the rest of the world, last week denied that the Kremlin was attempting...
opinion Andrei Kolesnikov

There is a belief that the Russian elite under President Vladimir Putin has only ever been interested in money. Yet Putin’s militant, anti-liberal...