"I don't know what to do about it, John. It is a nightmare and it is hell. And something in me has been broken irreparably."

Thus responded Maksym Kurochkin, a Ukrainian Russian-language playwright, to my question about what he is experiencing these days. As his comments starkly suggest, recent months have not been good for anyone nurturing blood or cultural ties to Russia and Ukraine.

The winter standoff on Kiev's Maidan Square pushed the so-called brotherly nations of Russia and Ukraine apart even before the shooting started. The annexation of Crimea by Russia in March exacerbated the situation. The downing of Malaysia Airlines flight MH17 on Thursday over eastern Ukraine made a dire state of affairs even worse.

In the theater world, old friends have become alienated while colleagues have taken up positions on opposite sides of the barricades, figuratively and literally.

But what do you do when that battle rages inside of you? What if, like Kurochkin or Natalya Vorozhbyt, another well-known Russian-language, Ukrainian playwright, you straddle the increasingly burned-out ground between Russian and Ukrainian culture?

Kurochkin and Vorozhbyt were born in Kiev, products of a multinational culture, and both became leaders in a remarkable revival of Russian drama since the year 2000. Kurochkin had three new plays open last season, one at Teatr.doc, another at the Meyerhold Center and a third at Breaking String Theater in Austin, Texas. Vorozhbyt's latest play was "Maidan: Voices of the Uprising" at the Royal Court Theater in London in May.

"My mother is from a Ukrainian-speaking village near Nikolai Gogol's birthplace," Vorozhbyt explained. "Papa is a Russian-speaking Ukrainian. But I was brought up from earliest childhood by my grandmother and grandfather, so my first language was Ukrainian." 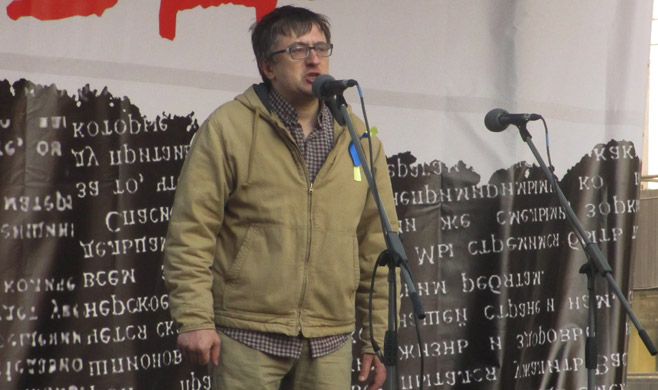 Playwright Maxim Kurochkin speaking at an anti-war rally in Moscow.

"We spoke Russian in our family," Kurochkin says. "But mother studied Ukrainian fine arts. And father studied Ukrainian ethnography. I am very pleased with my parents. Like true Kiev natives they freely switched back and forth between Russian and Ukrainian when it was necessary. I studied in a Ukrainian school. And when I began reading a lot, I often could not remember which of the two languages the books were written in."

According to Vorozhbyt, there was in the 1980s a concerted push to make Russian language dominant in Ukraine.

"When I went to a school in Kiev in 1982, about 80 percent of the schools were Russian," Vorozhbyt recalled. "That is what the policy was, an effort to suppress the national culture."

As a result, she admits it was only natural that she began writing her first poems, stories and, later, plays, in Russian. This choice was fortified when she was accepted into the literary institute in Moscow. "I did not think about language then," she declares.

Kurochkin attempted to write his first works in Ukrainian. But an acquaintance gave him some advice that changed his direction as a writer.

"I showed my texts to the writer and poet Roman Kukharuk, whose opinion I valued, and continue to value today. He said my Ukrainian texts were constrained," Kurochkin explained. "And he was right. I had very little living oral practice. I took as my model literary Ukrainian, the norms of which were actively beginning to change in the early 1990s. The language was throwing off Russian influence and beginning to develop. My 'Soviet' Ukrainian lagged behind reality."

Vorozhbyt recognized changes were taking place in Ukraine when she returned to Kiev in 2004 after a decade in Moscow.

"Throughout that period of independence a new wave of Ukrainian-language prose writers and poets arose. I read them with great pleasure. Nobody in Russia knew them but they were eagerly translated into European languages. And they did not look toward Russia. At all."

"In connection with the anti-Russian mood," she continued, "many of my Ukrainian friends have purposefully switched to Ukrainian exclusively. The pain and hurt and protest that I feel make me want to do the same. I very much feel that moment has arrived. Then I think, damn it, Russian is my language, too. Why should I have to give it up? I love it. I write in it. Protest against myself? I won't do that."

"I am a Ukrainian playwright," he declares unequivocally. "But I am connected to the processes that are occurring in Russian theater. And it is honorable to have a relationship with the best of Russian drama. Russian new drama for me is undoubtedly a progressive force."