Pyzik moved from Warsaw to London in 2010 to cover culture for Polish magazines and also wrote  about East European politics for publications such as The Guardian and The New Statesman.

She is too young to remember life behind the Iron Curtain, but observes with a healthy skepticism the fascination of the West toward the region and its recent past, and also the "ostalgie" spreading among citizens of former Warsaw Pact states, disillusioned with the life promised to them by European integration and hankering for the stability afforded by the Soviet Union.

The interview has been edited for length and clarity.

A: I thought the slogan [first used by Berlin's Mayor Klaus Wowereit to successfully rebrand his city] sums up almost too well what has been going on in the former East since 1989. We had lots of assets attractive to the West, like our industry and infrastructure and a cheap workforce to exploit and turn into consumers. Therefore — poor, but sexy. But this goes much deeper than just financial gain. It's absolutely primate. Eastern European cities are bathing in sleaze,  "everything is for sale" [it's] capitalism laid completely bare.

Q: Do you remember growing up behind the Iron Curtain?

A: My memory is necessarily filtered through what I know now, but my book is not nostalgic, or not even about nostalgia. I appeal that we shake off the current pro-capitalist view, which is morbid and responsible for the specific kind of hopelessness we feel today and look at the past to understand why we are in the place that we are, to correct mistakes and start projecting the new political reality. 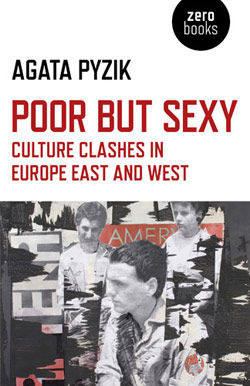 It is especially important in the former East, where capitalism is still relatively fresh and appeals to people on the most basic level [more consumer goods.] But together with its introduction we didn't get what is or used to be in the same package in the Western social democracy, like the welfare state. In result we have a crude, hostile reality, where money rules and people, brutalized by its effect, become the greatest enemies of each other and guardians of this system.

Q: Music played a big part in the cultural dialogue between East and West during the Cold War, but why is Depeche Mode still so popular in Eastern Bloc countries?

A: Depeche were indeed especially popular in Russia and Poland too, but remember, they were also popular in the U.S. It is because they could appeal to both sides during the late period of the Cold War during the 1980s. They consciously toyed with both Soviet and high-capitalist imagery. If you look at their old clips today, they look like modern Russia — bling meets Soviet symbols.

Boys on your streets still look a bit like from the 1980s. So my explanation is — apart from being just very good and capturing the zeitgeist better than anyone else — they are a part of this Soviet past people indulge in today, Soviet nostalgia. And also in a way they foresaw how the former East would look after the capitalist transition.

Q: What do you make of the comparisons news media and political analysts make between Russia today and the U.S.S.R.?

A: It is a deeply unhelpful simplification to say Russia today is like the U.S.S.R., because a lot has actually changed for worse. Putin appeals to the most reactionary residual features of the U.S.S.R., but his inspiration comes from the tsarist, imperial times. In fact, Russia today is a country without any significant ideology — it is a country in a vacuum, with an anomic society in deep stress and trouble. Therefore the majority chooses Putin, because he offers the most simple solution to problems that are pervading this country. And the last good times people remember will obviously be the Soviet times.

The following is an excerpt from Agata Pyzik's "Poor But Sexy: Culture Clashes in Europe East and West" (Zer0 Books, 2014)

Fear in the Western World

We have the 'New Romantics,' a youth culture born during the difficult time of the second Cold War. The Soviet bloc was then everywhere again: it was in kitschy Hollywood films, "The Hunt for Red October," it was in mainstream pop, Elton John's "Nikita" and Sting's dreadful "Russians Love Their Children Too" (wonder if he knew that 30 years later he'd be good friends with the daughter of the absolute ruler of Uzbekistan, turned from Soviet republic into a personal despotism.) From the New Romantics, several Cold War movements exploded, like neo-baroque film in France. Luc Besson's "Subway" or "Nikita" are perfectly transitive Cold War films, made up all from international spy plots, criminal big capital, shot in flamboyant, ultra-modern urban areas, made up only of dizzily colorful '80s fashion and crazy car chases.

The weird aesthetic space that emerged between the neoliberal space opening in the late '70s, means that commodified subcultures become an ersatz of a political emancipation from the past which is no longer available. Subculture replaces political engagement which, for different reasons, can't be expressed politically (the bloc for the suppression of dissent and in the West for its dependency on the market). Tension arises.

A closer look at the art production after the war will show how it was America, not simply everything west of the Iron Curtain, that served as 'West.' America was the 'unconscious' behind all the artistic movements or subcultures, even if by the force of negation, regardless if in Western or Eastern Europe. So feared that in post-punk and some new romanticism it found the fiercest, most refined critics.

Especially intense in this matter was the early Ultravox, with John Foxx. Their second album "Ha! Ha Ha!" is full of angry exclamations of fear and loathing toward Western civilization than any other record of that era; with the typically Burrougsian/Ballardian visions of deadly, decaying Western cities full of savage scenes of murder, sex and violence, with evil high- rises populated by corrupt politicians, and all this to noisy, angular punk. Each song screams of this paranoia, voicing the fears of the Western world: of the bloc and the Third World rising, the cold bloc freezing the West, not alive, but not quite dead yet, a zombie, the character moves between atrocities, "Divine light, chemicals, Warhol, scientology" ("Artificial Life").

In "Hiroshima Mon Amour" the title is at the same time a yearning for a delightful self-annihilation (longing cheerfully for the whole thing to burn) and of course expressing the real nuclear fears people had during the Cold War. Last but not least, it's a confession of a film buff, boasting his love for the famous Alain Resnais film with Emmanuelle Riva, controversial for leveling her trauma at losing her German lover during the occupation (paid for by shaving her head and a public disgrace) with the tragedy of Hiroshima, where she cures her trauma through passionate sex with a Japanese lover. Through this, it reveals a perfect, dandy-like combination of self-hatred and style. And of course, how better this style can be displayed than by a Weimar-suit dressed Kraftwerkian traversing the continent.

Kraftwerk made train journeys not only fashionable again — they brought train-crossing a wholly new mythology. For  U.K. musicians and scenesters the experience of trains had to be necessarily also an experience of Europe. This way, Europe and trains and the strange thrill of it (borders, passport controls, forbidden lands) made them again what they used to be to the revolutionary Russian artists. Just as Constructivists, by design, and filmmakers by preparing newsreels, like Dziga Vertov or Viktor Turin of  "Turksib," (1929's pioneering documentary on the great Soviet railway, which made the industrialization of the gigantic country possible, from Turkmenistan to Siberia) participated in the preparation of propaganda trains. Some of that excitement of travel got into the bloodstream of the synthetic/techno/pop sound of the era.

The later Ultravox, with Midge Ure, made of the famous Conny Plank-produced 1980 album "Vienna" a real catalogue of Cold War obsessions: from the sentimental, but meaningful title song (the video purporting to be the formerly four occupations-divided European dream-city was shot in Covent Garden), the man of mystery "Mr X" or the "Western Promise," all cut in punishing, aggressive synths. What else was this to suggest rather than 'the East is coming'?

This Soviet-mania persisted in Ure's previous band, the notorious Visage, known for the best outfits and the best hits in the industry. Steve Strange's biography is often silent on political matters, but this Tory felt moved by the Russian motifs sporting, among a thousand others, the look of a Russian Cossack or muzhik. The Cold War was in the air, but what else was the color grey was in their biggest hit "Fade to Grey" if not for the sake of the concrete?

Strange wanted to be anything but grey, yet within the relentless, Moroderesque Germanic blasts from the synthesizer, they perfected the plastic look from the future of the endless Cold War (as in their cover of "In the year 2525" as the biggest 'machines think for you' Orwellian nightmare.) Damned robots don't cry, yet the pathos of "Night Train," the weird affection towards the mechanized and the Russian kitsch in "Moon Over Moscow," with male choirs and Cossacks doing Kalinka. They could pair with the Leningrad Cowboys, whose trilogy by Aki Kaurismaki was equally the most ridiculous and the greatest of Cold War epics.

"Poor But Sexy: Culture Clashes in Europe East and West" is published in paperback and digital formats by Zer0 Books, 2014. www.zero-books.net.