Electronic music veterans Plaid take to the stage last at Strelka Institute this Friday as a trio of London acts play a British Council event bringing the best of U.K. music to Russia.

Veterans of electronic music, Plaid, the duo of Andrew Turner and Ed Handley, started out as part of the legendary techno trio Black Dog Productions.

The group has been considered a major player in the "intelligent dance music" or IDM scene. Downtempo and not particularly danceable, IDM originated in the early '90s from a roster of Warp Records artists from the U.K. who picked and mixed from a multitude of cultural and musical influences, including hip hop, early techno and ambient music putting it together with odd time signatures. The music was intended for listening at home rather than at a club. 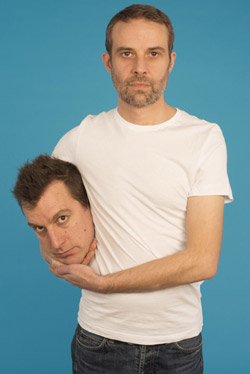 Turner and Handley’s 10th album “Reachy Prints” was released in May.

"It's just slightly more experimental; dance music that had a complexity to it," said Handley in a Skype interview, "It's about taking sounds that are not traditionally musical sounds and using synthesis in a way that is more like a sound design process."

Plaid's early sound, like many other British IDM musicians from that scene, was heavily inspired by Detroit techno.

"We were trying to emulate these American artists, and the music developed into a more complex, harmonic and syncopated version of the Detroit stuff," he said.

Released in May, "Reachy Prints," their 10th studio album, is a return to their warmer, lighthearted sounds of their '90s roots. "We didn't choose to go backwards, but having been making music for 25 years now, we inevitably reference ourselves," Handley said. "It is not a radical rethink on what we have been doing, but there is always a progression, maybe it's to do with the melodies and harmonies and some of the production," he added.

The electronic music scene has come long way since Handley began making music, developing into a huge industry with celebrity DJs and mega-festivals, but Handley welcomes the change: "We now have a heritage of different styles and younger producers can draw on this rich history of sounds and techniques … With Internet distribution, we can hear music from all over the world. Just 15 years ago, if I wanted to hear Russian electronic music, I wouldn't know where to find it."

While many critics lament the globalization of dance music as too commercial, Handley is optimistic: "That's just the system at work," he tells me. "We can work within the system to a degree. There are still some great festivals which, apart from big name DJs, have got hundreds of smaller acts which are more innovative … we're getting interesting fusions of dance music with different styles, and that's great for everyone."

Plaid will bring along guitarist Benet Walsh for the gig, their first in Moscow in three years, and will be using Mogees, microphones that pick up vibrations and allow musicians to play ordinary objects — like a chair or table — as musical instruments.

The concert takes place at Strelka Institute, 14 Bersenevskaya Naberezhnaya at 11 p.m. on Friday, June 20. Tickets cost 500 rubles at the door. Listen to Selector Radio at www.selector-radio.com.