The coming week in London is set to be all about Russian art as the city's premier auction houses and arts venues kick off the fourth annual Russian Art Week. Auctions of rare and valuable Russian paintings, icons and works of decorative art will be held at all the major auction houses from May 20 to June 7, alongside a series of exceptional exhibitions of work by contemporary Russian artists at galleries and museums around the city.

A biannual event that takes place in November and June, the last Russian Art Week saw the major auction houses taking in £55 million for masterpieces by Bakst, Roerich, Falk and Faberge. This spring, auction houses Bonhams, Christie's and Sotheby's will all offer remarkable works of art for sale, including "The Pearl Mosque at Agra" at Christie's, which is estimated to fetch between £1 million and £1.5 million on June 2 at the auction house's Russian Art sale.

The lot in the Bonhams sale that is generating a huge amount of buzz is "Signal Fires of Peace" by Nikolai Roerich, which reappeared recently after having been stripped of its original title and considered lost. Valued at between £800,000 and £1.2 million, the early Roerich masterpiece was inspired by the events of the Russian Revolution and infused with Roerich's characteristic symbolism.

Bonhams is the world's third largest fine art auction house and set the world record for the most expensive Russian painting ever to be sold in a Russian auction when Nikolai Roerich's "Madonna Laboris" sold for £7.9 million in June 2013.

Also up for sale at the Bonhams auction is Vladimir Davidovich Baranoff-Rossine's "Still Life with Fruit and Flowers" painted between 1910 and 1915. The work is valued at between £700,000 and £900,000. Baranoff-Rossine travelled to Paris in 1910 where he was exposed to a diverse set of influences and changed his Ukrainian birth-name, Shulim Wolf Baranoff, to the more European-sounding Daniel Rossine.

Another of the painting highlights in the same sale is "Male Nude" from 1853, a rare example of an early work by Nikolai Nikolaevich Ge, who was best known for his later paintings on monumental religious themes. "Male Nude" was created in 1853 for an exam at the Imperial Academy of Arts in St. Petersburg and carries the official wax seal of the academy. It was awarded a silver medal — the highest level of distinction for a work by a student — and is expected to go for between £130,000 and £150,000.

Also hailing from St. Petersburg, 11 Faberge works are among the most valuable pieces in the June 4 sale at Bonhams, showcasing the materials and techniques that endowed the legendary Faberge firm with its lasting appeal.

Among the lots that will see collectors from around the world descend on New Bond Street are a 1913 Faberge figure of a bourgeois woman crafted in semi-precious stones with sapphire eyes. The piece is offered with an estimate of £300,000 to £500,000. Faberge genre figures rendered in hardstone were as rare as Faberge eggs and only about 50 were ever produced. The piece now up for auction was once in the collection of Emanuel Nobel, a prominent Swedish industrialist based in St. Petersburg, who owned the largest collection of stone figures before 1914 and was one of Faberge's most important clients. 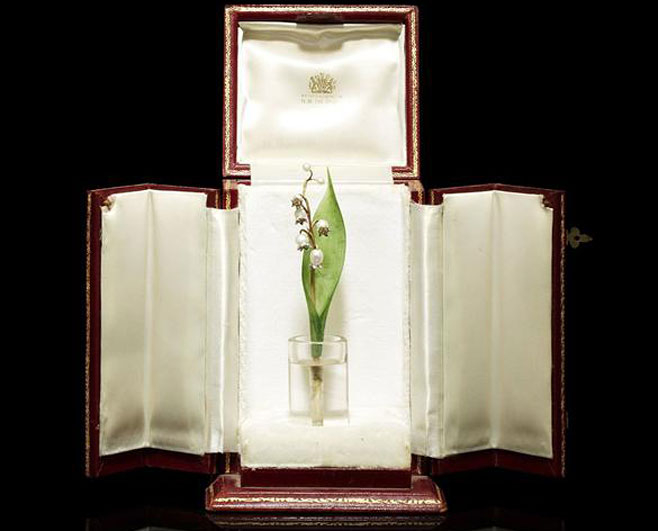 A jeweled gold and rock crystal lily of the valley Faberge study is also set to go up on the block. Estimated at £200,000 to £300,000, the delicate study possesses leaves made of nephrite unfurling from pearl buds that are covered in sparking rose-cut diamond dew drops. Faberge flower studies were particularly cherished by the imperial family, with lilies of the valley finding particular favor with Empress Alexandra Feodorovna and the dowager Empress Maria Feodorovna as well as their royal British cousins.

Continuing the imperial theme yet falling outside Russian Art Week, is a sale of two spectacular silver vegetable dishes from dinner services used by Catherine the Great. The pair of dishes are to be offered at part of Bonhams Fine Silver and Gold Boxes sale in London on June 18. They are valued at between £30,000 to £50,000 for the pair.

Among the survivors of 22 silver table services ordered by Her Imperial Majesty, the vegetable dishes were created for the new seats of regional government that Catherine established in Russia. She wanted each center of government to have a complete service of its own to avoid the need to transport silver from place to place during her tours of the country.

Catherine ordered five services from Russian silversmiths but the others were commissioned from artisans in London, Augsburg and Paris. Four of the French-made services — those made for Moscow, Kazan, Nizhny-Novgorod and Yekaterinoslav, later known as Yekaterinburg — employed the talents of the greatest silversmith of the 18th century, Robert-Joseph Auguste.

The services were recalled to the Imperial collection on the death of Catherine the Great and were added to during the early 19th century. In the aftermath of the Revolution, the new Soviet Government sold the services along with other treasures. It is almost certain the dishes were bought from the Soviets in the 1920s by one of the most celebrated dealers of the 20th century, Jacques Helft, who in 1929 sold them to the French banker Count MoХse Nissim de Camondo. The description of the pieces exactly matches the dishes in the sale. The Count then sold them back to Helft the following year in exchange for tureens from Catherine's Moscow service. Upon his death in 1935, De Camondo left his house and contents to the French state in honor of his son, Nissim, who had fallen for France in World War I. Eight years later his remaining family was sent to Auschwitz where they were killed.

In addition to the auction houses, a number of galleries and museums are also getting in on the act. Exhibitions such as "Russian Revolution in Art: Russian Avant-Garde: 1910-1932," at the St. Petersburg Gallery in Cork Street vies for most anticipated with an exceptional exhibition of work by Soviet artist Viktor Popkov at Somerset House. The Calvert 22 gallery is hosting an exhibition of contemporary Russian photography curated by Kate Bush, "Close and Far: Russian Photography Now," while Erarta Gallery's "Russian Cosmism" will feature a number of contemporary Russian artists.

Other scheduled events range from ballet and theater to talks and academic conferences, marking this as an important week in the calendar of the U.K.-Russia Year of Culture 2014. Many of the events that begin this week will run throughout the month.

For more information on the complete schedule of events, visit russianartweek.co.uk.