This year's World Press Photo prizewinners for photojournalism are on display at the Artplay Design Center in an exhibit sponsored by Itar-Tass, conveniently located in the same room as "Our Crimea," a display of archival Itar-Tass photos from Crimea.

This interesting juxtaposition of the pinnacle of photojournalism in World Press Photo side-by-side with a highly politicized presentation of Soviet propaganda photography in "Our Crimea" adds a new and amusing element to World Press Photo.

An annual competition, the World Press Photo competition has been held since 1955 by the Dutch nonprofit World Press Photo foundation. Commonly held to be the most prestigious award in photojournalism, the foundation selects one "Photo of the Year" and several other winners in different categories each year. Submissions are received from all over the world, and while most winners are professional photographers, amateurs have also achieved success in some categories. 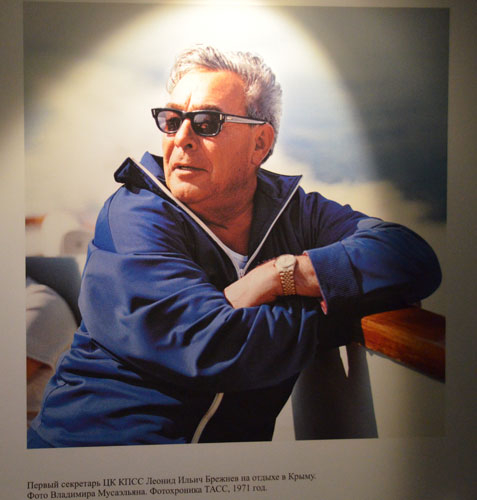 Brezhnev takes it easy in Crimea.

As one might expect from photojournalism, the subject matter of the contest varies widely from year to year depending on events — this year, "Photo of the Year" went to U.S. photographer John Stanmeyer's for  "Signal," which depicts poor African migrants on a moonlit beach in Djibouti holding their glowing cell phones aloft in hope of catching a signal to call home. Other photos depict natural disasters, war in Syria, as well as athletes, politics and everyday life.

Russia traditionally has a strong presence at World Press Photo, and three Russian photographers have won awards this year: Danila Tkachenko took first prize for "Staged Photos — stories" for his "Escape" series of photos of Russian and Ukrainian hermits in nature; Nikita Shokhov took third prize in the same category for "Utrish," a series of photos of nudists from the Utrish national park; and Elena Chernyshova took third prize in the "Daily Life — stories" category for her series "Days of Night — Nights of Day" on life in Norilsk. 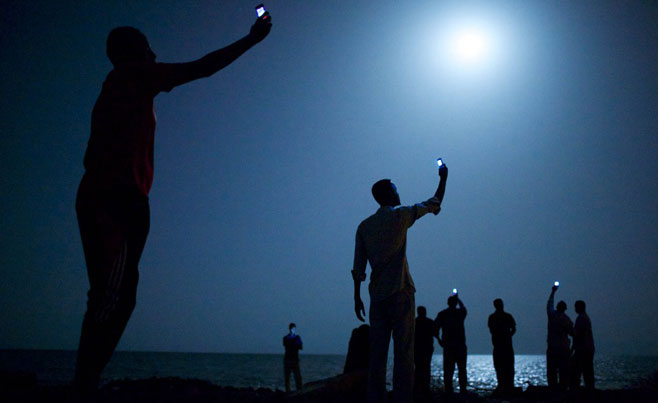 The photos seem to focus only on the most illustrious visitors of Crimean resorts, thus presenting a very unique history of the 20th century through the eyes of the Crimean beaches — Stalin in swim trunks gives way to Brezhnev in shades and a sailor shirt, who in turn makes room for Putin in a polo. This parade of celebrities misses more or less all of the interior of the peninsula, including major cities and Crimean Tatars, yet apparently encompasses "Our Crimea," as the exhibit's name would suggest.

The exhibits' proximity to one another was presumably intended to entice audiences upstairs to view the Crimea photos, yet few visitors seemed interested in making that climb. This is undoubtedly to their loss, for though the politics of the exhibit may not be for everyone, we can all appreciate how silly Brezhnev looks in a sailor suit.

"World Press Photo 2014" and "Our Crimea" are on display until June 12 in the large hall at the Artplay Design Center, 10 Ulitsa Nizhnyaya Syromyatnicheskaya, Bldg. 3, Entrance 3A.