Among the major deals sealed on Tuesday during the first day of President Vladimir Putin's visit to China, the most hotly anticipated was conspicuously absent — a 30-year gas supply contract worth an estimated $400 billion that would have marked Russia's arrival on the Chinese energy market.

State-owned gas giant Gazprom has been negotiating to supply at least 38 billion cubic meters of gas per year to China for a decade, and just prior to Putin's visit state and Gazprom officials said the deal was 98 percent ready.

The only part of the agreement left hanging was the base price — "one digit," Gazprom CEO Alexei Miller called it on Monday — but it still remained unsolved on Tuesday. Putin's spokesman Dmitry Peskov told reporters in Shanghai that the sides had not yet agreed on the issue, meaning the contract was not signed.

But Peskov would not abandon hope: "The visit is not over yet. Talks will continue … substantial progress has been made," he said, Reuters reported.

The contract may be signed at "absolutely any moment," Peskov added, suggesting that the deal could be clinched on Wednesday, the last day of Putin's visit to China.

In an interview with Bloomberg television earlier this week, Prime Minister Dmitry Medvedev said gas to China would be sold at the price close to what Europe pays, which was on average $380 per 1,000 cubic meters last year. Analysts have long surmised that the sticking point in Gazprom's negotiations with China was China's insistence on paying a much smaller price that Gazprom's European customers.

Medvedev also said that Russia's interest in supplying gas to China had nothing to do with political tensions with the European Union over Ukraine, but was about diversifying into new markets.

"I would not look for politics behind [this deal] but supplies to the Asia-Pacific region are the future, there is no doubt about it," he told Bloomberg.

But there is a big difference between supplying gas to China and exporting it along the already established routes to Europe, he said.

"Firstly, export infrastructure for the European market is already built and — with the exception of the newer Nord Stream pipeline to Germany — the capital costs have been recouped. Chinese exports will require transportation infrastructure on both sides of the border, as well as upstream investment in Russian production closer to China," Davis said. 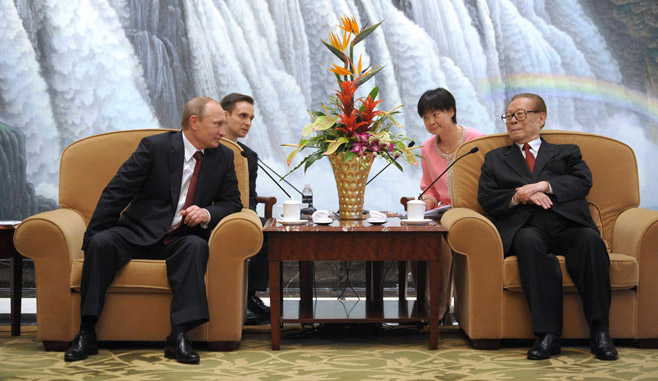 Russian President Vladimir Putin meeting with former Chinese President Jiang Zemin in from of an idyllic waterfall scene in Shanghai on Tuesday.

Issues like prepayment, infrastructure costs and control over transportation pipelines, as well as take-or-pay-provisions and, of course, the price formula will likely keep the parties from signing this deal, he said, adding that while Europe does not have a ready alternative for Russian gas, China is not yet dependent on energy supplies from Russia and may be just inclined to keep it that way.

At the same time, Russia reached supplementary agreements on Tuesday that may bring the signing of the main gas deal closer.

But despite this, the agreement was not signed Tuesday, bringing Gazprom shares down 2.2 percent in Moscow at the close of trading.

But the deal-making day was not fully lost — Putin presided over the signing of a number of major contracts between Russia's state-owned and private companies.

Russia's En+ group and Chinese coal miner Shenhua Group signed an agreement to develop a coal field in Zabaikalsky Krai in Siberia. The amount of investment in the project was earlier estimated at 30 billion rubles ($868 million).

Overall, more than 40 contracts are planned to be signed before Putin leaves China on Wednesday.

Senior tennis official Alexander Medvedev slammed what he called a lack of "judicial independence" in the No.1-ranked star's deportation from Australia...