Contribute Today
By Alexander Annin
May 14, 2014

May 19 is the 30th anniversary of the mysterious death of the great Soviet football player Valery Voronin, a defensive midfielder for the Soviet national team and for the Torpedo Moscow football club. The legendary athlete was found dead of blunt trauma to the head at the age of 45 in 1984, almost 20 years after his career was abruptly ended by a tragic accident.

While Voronin is now long dead, his finest moments at the dramatic 1966 FIFA World Cup in England, particularly the award ceremony, stay in the memories of many older football fans. While the host country — England— won the tournament, the national team of the Soviet Union achieved their best result in history, taking fourth place in the tournament. At the award ceremony, the young Queen Elizabeth II awarded a special prize — a silver china set — to Valery Voronin as the most handsome player at the World Cup.

Since childhood, Voronin had dreamed of becoming famous somehow, and he achieved this goal at an early age. He was born in Moscow, the only city in the whole U.S.S.R. where a gifted, hard-working person could make a fast career in any field. Furthermore, and perhaps most importantly, his father was director of  food store. Vendors in the U.S.S.R. were among the most powerful individuals, as they had the ability to find and distribute increasingly rare consumer goods.

His father's grocery store was located in Peredelkino, the famous Soviet writers' village outside Moscow, and there Voronin became personally acquainted with store customers like Nobel Prize winner Boris Pasternak and the poets Yevgeny Yevtushenko, Andrei Voznesensky and Bella Akhmadullina.

Voronin's football career took off in the late '50s as he became a pivotal player in the Torpedo Moscow team, a traditional underdog transformed into a powerhouse by star forward Eduard Streltsov. When Streltsov was imprisoned for rape in 1958, Voronin stepped up and helped lead the team to the top of the league in 1960. His prowess on the field led to admission to the Soviet national team that same year, and he helped the Soviets take silver at the 1964 UEFA Cup and fourth place at the 1966 FIFA World Cup. 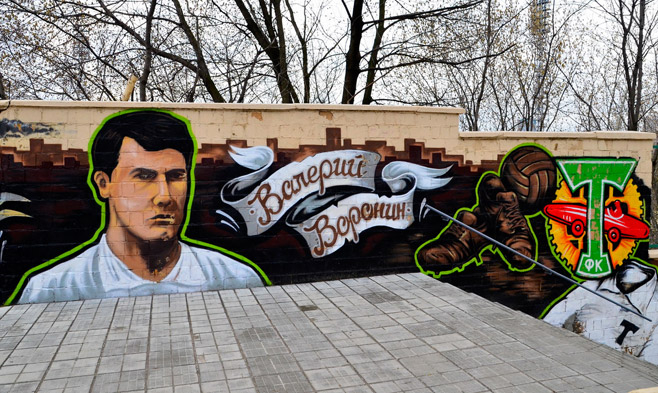 A mural of Voronin decorates the Streltsov Stadium in southeast Moscow.

In this period, the Soviet Union had entered a new era — a time without Stalin. The country needed  new heroes, people who could embody the "Soviet dream" in contrast to the "American dream." In April 1961, Yury Gagarin appeared, and after him came record-breaking pole vaulter Valery Broomel. Voronin too took his place in this new galaxy of heroes arising from the Khrushchev thaw.

However, despite the thaw, not all was rosy in the Soviet Union. Valery Voronin was the most educated person in Soviet football, a multilingual bibliophile who read the best books by U.S. and British authors of the 1960s, well as being a fan of jazz, which was strongly discouraged in the Soviet Union. Known for his liberal tendencies, Voronin was closely watched by the KGB, which was irritated by Voronin's close friendship with international football stars like the Englishman Bobby Charlton, Irish winger George Best, Spanish striker Santiago Bernabeu de Yeste and the legendary Brazilian Pele.

Despite pressure and surveillance, Voronin continued to associate with dissident figures like the then-disgraced bard Vladimir Vysotsky and the persecuted author Boris Pasternak. However, his career as a  player was effectively ended by a disastrous car crash in 1968, which left Voronin permanently disfigured and psychologically shaken.

No longer a magnetically handsome football star, Voronin found himself abandoned by most of his former fans, lovers and friends. Like many Soviet men of his generation, Voronin turned to alcohol, and quickly spiraled out of control. While he continued to associate with Vladimir Vysotsky — himself a legendary drunk — Voronin largely avoided public life, and was rarely seen by his former teammates.

On May 19, 1984, four years after Vysotsky's death from an overdose of sedatives, Voronin's body was found in the bushes near the Varshavskoye Shosse, some distance outside of Moscow, and cause of death was ruled to be blunt force trauma to the head. While investigation into his death proved inconclusive, news of his fate, quickly spread around the country, bringing the faded star back into the public view. Voronin was buried with much honor at Danilovskoye Cemetery in Moscow at a funeral attended by thousands of mourning fans from all over the country.

Ukrainian filmmakers have been winning awards and filling movie theaters in recent years. Don't miss out.