Issuing from the sophisticated, doomed world of pre-war Vienna, Austrian-Jewish composer Arnold Schoenberg's one-act opera "Erwartung," or "Expectation" is a defining piece of musical modernism. On the occasion of the centennial of World War I, Moscow's Austrian Cultural Forum and Center of Contemporary Music presented a series of new works inspired by Schoenberg's piece, inviting composers and artists to look back to the composer's time while imagining their own.

Known above all for his decisive break with the harmonic system that governed Western music for centuries, Schoenberg himself occupies a uniquely controversial place in music history. Undeniably an key innovator, Schoenberg nevertheless continues to draw ire for both the abrasive, otherworldly quality of his music and the uncompromising resolve of his theoretical writings. Even as modernity pushed artists to fulfill the desires of masses, Schoenberg obstinately made it a principle to refuse comfortable resolution.

To some, he is a brilliant musician whose ideas, refracted off of his contemporaries and through the heady atmosphere of the postwar avant-garde, continue to influence today's most expansive sounds. To others, he is the curmudgeonly pedant responsible for turning composing into a cacophonous, hermitic pastime and quarantining classical music from the cultural mainspring.

Composed under dramatic circumstances in 1909, "Erwartung" is one of the Schoenberg's most iconoclastic works. Shortly after the suicide of painter Richard Gerstl, who had been carrying on an affair with Schoenberg's wife, Mathilde, the composer worked frenetically, completing the composition in under three weeks. Nonetheless, the piece did not receive its premiere until 1924, by which time the war and the development of modernism across the arts had perhaps made audiences more amenable to its radicalism. 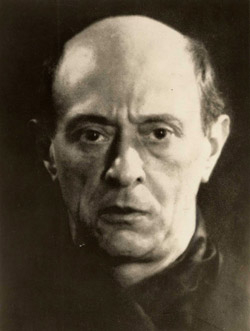 Teeming with huge, dissonant chords and sudden shifts in pitch and volume, "Erwartung" is indeed a potent experience. Lacking not only traditional harmonic relationships, Schoenberg's composition also does away with thematic repetition. The resulting cascade of sounds and impressions is held together by a stark theatrical premise — a woman wanders through a nocturnal forest in search of her lover, but finds, instead, a corpse. The fluid score and evocative symbology — night, forest, anxious woman, dead man — give the piece a the coy interpretative suggestiveness of a fever dream.

"We wanted to do something to commemorate this memorial year," said Simon Mraz, director of the Austrian Cultural Forum in Moscow, "What was the expectation of the composer so soon before this catastrophe broke out?" Along with Vladimir Tarnopolsky, head of the Moscow Center for Contemporary Music, Mraz spent two years planning the performance, a multimedia combination of contemporary chamber music, video, and dance, which transpired last Tuesday at the Meyerhold Center.

Tying Schoenberg's work to the centennial of World War I necessarily favors a certain interpretation of the amorphous opera. Accordingly, the first two pieces featured focused heavily on doom and destruction. "Defaire," by composer Peter Jakober and Paul Wenniger, both from Austria, combined an ominous score, alternating martial staccatos and dissonant swoons, with a montage of documentary footage. In keeping with the theme, Wenniger's video showcased disasters and explosions captured in grainy newsreels that recalled the finale of Stanley Kubrick's similarly apocalyptic "Dr. Strangelove, or How I Learned to Stop Worrying and Love the Bomb."

The next piece, "Something went Awry," by Russian composer Alexei Nadzharov and Australian artist Andrew Quinn, transposed the historical chaos of "Defaire" to the technological realm. Combining the chamber ensemble with electronics, Nadzharov's music begins with plaintive oboe melodies and drones, but evolves into something more chaotic as some performers stand and scatter throughout the room. Quinn's animation, a structure that he informed us was based on the performance space, buzzed and pulsated with the music before finally being wiped away altogether by a sheet of pixels that descended like a viscous curtain. It was as if music and visuals alike had been infected by a computer virus.

Briefly allowing the audience of respite from the gloomy "Erwartung," Fyodor Sofronov and Alexandra Smolina's "Pierrot and His Shadow," instead takes its lead from Schoenberg's more playful "Pierrot Lunaire." Just as the cabaret-inflected "Pierrot Lunaire" charts a more freewheeling approach through high and low culture, darkness and levity, "Pierrot and His Shadow" traffics in gleeful incongruities, setting Sofronov's unhinged score against Smolina's irreverent visuals, including various packs of Soviet cigarette and a mummy.

The final piece, called "Erwartung," by composer Vladimir Gorlinsky and dancer Anna Garafeyeva, was the first to invite the audience onto the stage. Garafeyeva, who also works as a psychologist and a dance therapist, took on the role of Schoenberg's solitary, strained woman, dashing around the stage and changing direction at the strikes of a metal pole. The musicians, including a percussionist in charge of the aforementioned rod and violins echoing each other's melodies, wandered about the stage together with a number of curious spectators.

Perhaps reflecting her psychological background, Garafeyeva's performance had an undeniably inward quality, embodying a woman's mental turmoil. But the addition of the audience changed the complexion of the piece, allowing the viewers to watch each other interact with the artist and her performance. The audience members, largely young and fashionably dressed, appeared curious and awkward, anxious but necessarily aloof from the panicked character. It was appropriately reflective tribute to a category-defying work that continues to challenge audiences today.