"Hamlet." Has there ever been a better play to fall back on when you need to have a chat about Russia?

"Words, words, words." "To be or not to be." "The rest is silence." All phrases that sound loaded in many a Russian historical context. These days words get tossed around like the proverbial ping pong ball in a hurricane. Sometimes they surprise, sometimes they dishearten.

I think it is safe to say that Culture Minister Vladimir Medinsky surprised many last week when he spoke out against State Duma Deputy Yevgeny Fyodorov for some strange, unfounded and completely illogical claims. After all, many have grown accustomed to the fact that Medinsky himself is a frequent source of curious, even controversial, commentary. Be that as it may, Medinsky sent an official complaint to the State Duma in response to Fyodorov's outburst.

Fyodorov lashed out at the Golden Mask Festival and some of the productions it honored with awards in mid-April. Fyodorov's complaints were many, but, as reported in Gazeta.ru, some of the choicest were, 1) that "three immigrant workers from Tadzhikistan" were given an award by the festival's musical jury; 2) that several of those who participated in the selection process in 2013 should have been disqualified because they were fired from different government positions in 2014, and, 3) that actor Alexei Devotchenko engaged in an "anti-government performance" during a celebration of the Golden Mask's 20th anniversary in late March.

For the record, Fyodorov is the same individual who claimed in early April that CIA agents in Hollywood wrote all the songs for legendary Russian rock musician Viktor Tsoi.

In a seven-page response to the Speaker of the Duma, Medinsky answered Fyodorov's accusations point by point and concluded by saying, "I considere it imperative to inform you that the facts set out in [Fyodorov's] speech are either presented in a skewed manner or are utterly untrue."

In another development entirely, theaters quickly began responding last week to a law banning obscenities in film and theater that was passed by the Federation Council on Tuesday. Assuming that President Vladimir Putin signs it into law, it will take effect on July 1. 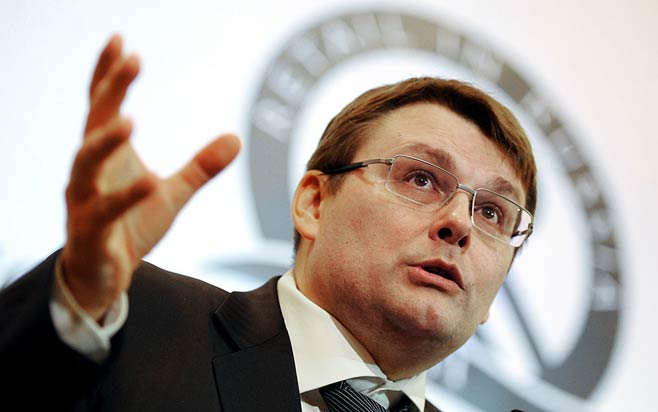 In the Far East in Vladivostok, "opinions of managers and directors of seaboard theaters on this question were split," reported PrimaMedia.ru. "Some considered that the lawmakers are right and that obscenities in the cathedral of art are unacceptable, while others are certain that the country has enough problems as is and that the new law will not work."

A theater in Prokopyevsk in Kemerovo Oblast' chose to get a jump on obeying the new law by changing their policy immediately.

"We are ready for the new law," Lyudmila Kuptsova, managing director of the Prokopyevsk Drama Theater, told Izvestia on Wednesday. "Some of our directors have voluntarily removed swearwords, some I had to have separate conversations with. From now on we will take this matter into consideration at the time of signing contracts."

This evoked a furious response from playwright and director Mikhail Ugarov, the artistic director of Moscow's progressive Teatr.doc, who railed on his Facebook page, "Let's all lay down for the patron in advance, just in case he decides to come!"

"You cannot do battle with the Russian language, I say that as a philologist," Ugarov declared in comments made to Izvestia. "We will not react in any way to the passing of this law. At present there is an active law that defends an author's rights, so I have no right to interfere with a playwright's text."

Confusion quickly arose over Izvestia's claim that the Fifth Theater in Omsk had already closed its production of Anna Yablonskaya's "Pagans" due to obscenities contained in the text. However, in exchanges that unfolded on several individuals' Facebook pages on Wednesday, it appeared that claim was erroneous.

Ugarov posted the following: "Managing Director Alexandra Yurkova of the Omsk Fifth Theater wrote that Anna Yablonskaya's "Pagans" was not removed from the theater's repertory and will not be removed. Furthermore, there was no editing of the text."

Responding to this news, Yelena Gremina, Teatr.doc's managing director, declared, "If all theaters will ignore this law, [the authorities] will have to take that into consideration."