Pervy Simfonichesky Ansambl Bez Dirizhyora — The First Conductorless Symphonic Ensemble, or Persimfans — was the main orchestra in the Soviet Union in the early 20th century. Founded by violin soloist Lev Tseitlin in 1922, the group of up to 150 musicians played regularly until their last concert in 1933 — but they never had a conductor.

Formed around Marxist ideology, Persimfans was a proletarian state orchestra without a musical director, but had an egalitarian philosophy and an ideological spokesman, Arnold Tsukker. Because of its unique nature, every performer had to be familiar with the entire score and decisions were taken by committees.

Though there were no pieces composed specifically for Persimfans, the orchestra had a wide repertoire and was not limited to any particular period. When Prokofiev came to Russia from France in 1927, Persimfans was the main orchestra that played only his music for almost a year. "The conductorless orchestra coped splendidly with difficult programs and accompanied soloists as competently as any conducted orchestra," wrote Prokofiev.

Named an Honored Collective by the Soviet government, they won much acclaim and inspired many imitators locally and abroad: in Baku, Kiev, St. Petersburg and Voronezh, and in the West in Leipzig and New York, but most petered out after a few years of existence. 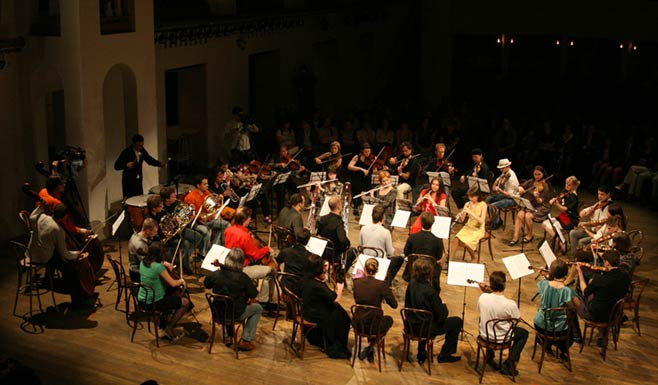 Persimfans playing Beethoven's Third Symphony at the School of Dramatic Art in 2010.

"Persimfans was just a band that had realized this idea, this philosophical, political, liberating idea that everybody could govern themselves," explained Konstantin Dudakov-Kashuro, assistant professor at Lomonosov Moscow State University, whose research interests are in avant-garde aesthetics.

They were all professional and well-trained musicians. Many members of the Bolshoi Theater's orchestra and the Moscow State Conservatory took part in Persimfans. They were so good that critics of Persimfans wrote in the 1920s that there had to be a hidden conductor behind the stage, that one of the performers was the conductor, or that the musicians were so well-trained that they had to play everything by memory.

An experiment in collective labor, the "core" of the orchestra — the most distinct musicians and perhaps one or two representatives of each instrumental group — would give a hint how to play, and they would discuss it together, so that any musician had an opportunity to discuss how to play any piece. They also sat in a semicircle, so that every musician was visible to one another.

"They had visual signs, and their scores are still used by musicians in our times. They are scores with very strange marks, like a symbolic system. Everyone had the same score but with their own handwritten marks," explained Dudakov-Kashuro.

Dudakov-Kashuro is among the group, together with musicians Peter Aidu and Gregory Krotenko, who initiated the revival of Persimfans at the Music Laboratory in Moscow's School of Dramatic Art in 2008. The Music Laboratory is now an independent organization, and with Aidu, won the 2014 Sergei Kuryokhin Contemporary Art Award.

The group has been playing on and off since 2009, and like the original Persimfans, is comprised of professional musicians and members of other orchestras and the Moscow Conservatory. They began playing the first piano concerto by Alexander Mosolov, a rarely played piece composed between 1926 and 1927, and have performed Beethoven's third symphony and works by 19th-century Russian composer Mikhail Glinka, as well as works by avant-garde noise ensembles of the early 20th century.

Despite the lack of a political impetus behind the contemporary Persimfans, Dudakov-Kashuro sees such an experiment as still relevant: "Social media, they are more or less conductorless as well: grouping together synchronically, flash mobs and all these sorts of things. It is kind of a trend … But I think this context of equality, perhaps it is not popular [today], but it is still actual. The idea of unity and equality is still the way we want to move toward."

Members of Persimfans will play chamber works ranging from experimental academic music to absurdist rock in the last concert of the series "Museum of Sound Figures" on May 1 at the Moscow Conservatory (Rachmaninov Hall), 13/6 Ulitsa Bolshaya Nikitskaya at 7 p.m.

People from all over the world came to test their athletic prowess and take in the beauty of Baikal’s icy landscape.

On This Day in 1852 the Hermitage Opened

Through the changing tides of history, the Hermitage has remained both an iconic symbol of Russian heritage and a leading preserver of world art.