The West is imploring Russia to help de-escalate tensions in eastern Ukraine after pro-Russia armed men seized government buildings in multiple towns over the weekend, even as Russia continues to deny involvement in the confrontations.

Amid the West's calls for a peaceful resolution to the mushrooming unrest, Ukraine's central government ordered an operation to clear pro-Russian forces from occupied buildings in the town of Slovyansk on Sunday. Ukraine's interior minister said there had been casualties among both Ukrainian law enforcement and pro-Russian forces, while Ukrainian President Oleksandr Turchynov late on Sunday announced that a large-scale offensive would be carried out against the militant separatists in the east of the country. (See related story, page 3)

Kiev and its Western allies have been scrambling to respond to what they believe are covert Russian efforts to destabilize eastern Ukraine. In a telephone call with Foreign Minister Sergei Lavrov on Saturday, U.S. Secretary of State John Kerry urged Russia to "remove its people from south-eastern Ukraine" and warned that Russia would face further sanctions if it failed to take steps to normalize the situation in the country.

A list of Russian officials and businessmen already face travel bans and asset freezes in the U.S. in response to Russia's annexation of the Ukrainian peninsula of Crimea in March. Russia has also been excluded from the Group of Eight for its intervention in Ukraine.

As tensions rise in several eastern Ukrainian towns, new diplomatic efforts are underway to seek a resolution to the crisis. On Thursday, talks are set to take place in Geneva with representatives from Russia, the U.S., the European Union and the Ukrainian government.

But some analysts have said the convoluted nature of the conflict muddies the path to resolving it.

"I think diplomatic talks are always necessary, but at this point, it is impossible to predict what Russia will do next," said Igor Bunin, the director of the Center of Political Technologies, an independent think tank based in Moscow. "Decisions of this sort are taken at the very top. We do not have a clear idea of what kind of decision will be made for the time being."

President Vladimir Putin has said on numerous occasions that Russia would not seize eastern Ukraine, but has reserved the right to protect Russians beyond the country's borders.

The White House, meanwhile, announced on Saturday that U.S. Vice President Joe Biden would be traveling to Kiev on April 22 to demonstrate the West's support for the country's new authorities, which Russia has deemed illegitimate. Biden is scheduled to consult with Ukrainian authorities on the stabilization of the country's economy and its upcoming presidential elections, scheduled to take place on May 25.

International organizations over the weekend also denounced Russia for its supposed role in heightening tensions and urged it to take immediate steps to ease the situation.

United Nations General Secretary Ban Ki-moon released a statement on Saturday calling for "urgent and constructive dialogue to de-escalate the situation [in eastern Ukraine] and address all differences." 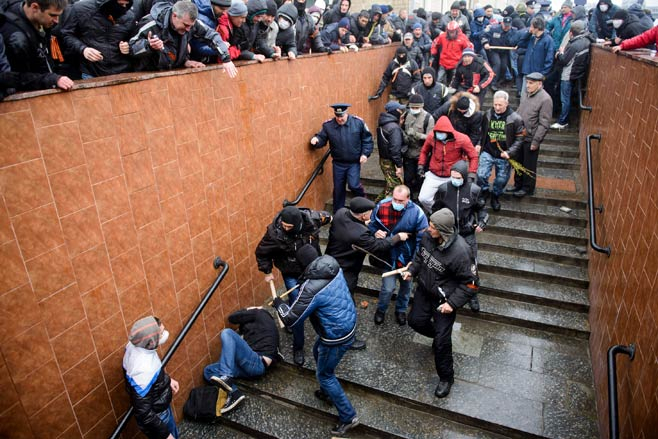 Pro-Russia activists beating a pro-Western demonstrator lying on the stairs during a rally in Kharkiv on Sunday.

"The reappearance of men with specialized Russian weapons and identical uniforms without insignia, as previously worn by Russian troops during Russia's illegal and illegitimate seizure of Crimea, is a grave development," said NATO Secretary General Anders Fogh Rasmussen, in a statement released on Sunday.

While NATO explicitly alleged the presence of Russian troops in eastern Ukraine, a statement released by EU foreign policy chief Catherine Ashton on Sunday was more tempered in its interpretation of Russia's role in the confrontations.

"I reiterate the EU's strong support for Ukraine's unity, sovereignty and territorial integrity and call upon Russia to do so as well. To this end, the Russian Federation is urged to call back its troops from the Ukrainian border and to cease any further actions aimed at destabilizing Ukraine," the statement read.

But the many Western appeals seem to be falling on deaf ears within the Russian government, which continues to deny guilt in the crisis.

Lavrov vehemently denied to Kerry in their telephone conversation that Russia had fomented unrest in eastern Ukraine with the help of armed, pro-Russian agitators, according to a Foreign Ministry statement.

Lavrov also said that neither the U.S. nor Ukraine had provided any evidence of the presence of Russian agitators in eastern Ukraine and that such allegations were attempts to "put the blame on Russia" for the volatile situation in the country.

Russian officials have repeatedly said that the current Ukrainian government, which it says illegally seized power after President Viktor Yanukovych was ousted in late February, is the cause of the current unrest in the country.

Lavrov told Kerry that the unrest in eastern Ukraine stemmed from the Ukrainian government's disregard for "the legitimate needs and interests of Russian and Russian-speaking population."

He also said that the use of force against pro-Russian protesters, which he referred to as "desperate inhabitants" of eastern Ukraine, would undermine further multilateral cooperation on the Ukrainian question, and could disrupt the planned Geneva talks later this week.

Pro-Kremlin political analysts have adopted the state narrative on the Ukrainian authorities' role in the escalation of tensions in their country.

"Authorities in Kiev have demonstrated that they are weak, that they cannot control the different regions of the country," Alexei Mukhin, the general director of the Moscow-based of the Center for Political Information, said by telephone. "They have tried to show their independence, their ability to control the country, but they have failed to do so."

“Instead of ignoring this nonsense, the U.S. accepts Putin’s agenda and scrambles to organize some meetings,” Navalny wrote from jail.
show of support

Activists are trying to determine the full extent of the crackdown during anti-government protests that rocked the Central Asian nation.
mission complete

The contingent of around 2,000 CSTO troops was deployed to Kazakhstan as protests over an energy price hike spiraled into deadly violence.