On a chilly Saturday afternoon, like-minded Muscovites converged to share their enthusiasm for the Star Wars franchise, George Lucas' incredibly successful marriage of pulpy swashbuckling, new age mysticism, and state-of-the-art special effects. For one day, a Soviet-era movie theater played host to jedis, aliens, and even people who like "The Phantom Menace."

"Star Fans' Party" is not an official Star Wars convention, replete with celebrities and licensing opportunities, but rather a more intimate gathering of hardcore fans. The festival's organizers, Yekaterina Pogodina, Alyona Panokina, and Sasha Strizhevskaya, bonded over the films while studying at the Moscow Medical Academy.

"The larger conventions included many other fandoms," says Strizhevskaya. "We wanted to make one only for Star Wars." While much of fan culture, including that of Star Wars, takes place online, Pogodina insists that "nothing can replace meeting in person, and this is the main reason for the convention." Despite the gathering's rough, do-it-yourself atmosphere, almost 400 people showed for the event, making for mild profits that were in turn donated to charity.

One of the event's main attractions was the opportunity for fans to construct, show off, and pose for photos in elaborate costumes, an activity known as "cosplay," or costume play. The costumes ranged from the elaborate to the skimpy to the elaborately skimpy. For example, two women attached tentacle-like appendages to their heads and covered their bodies in purple and turquoise make-up in order to portray Jabba the Hutt's comely dancers with utmost verisimilitude.

Cosplay has become so popular among fans that Lucasfilms intervened to ensure that any appropriation of their copyrighted material remains not-for-profit. Accordingly, fan organizations such as the 501st Legion and the Mandalorian Mercs, both of whom were represented at the event, go about costuming with an explicitly charitable purpose.

"When you wear costumes, you play a role and you feel that you are inside of the story," says Diana Tamarova, a cosplay veteran whose experience is not limited to Star Wars. Consequently, the choice of a costume — and an accompanying identity — is a loaded and delicate one. Kirill Tikhomirov, a public relations officer with the 501st Legion, whose members dress up as the imperial forces, chose the dark side because they had "nice ships, nice suits, and nice English accents." 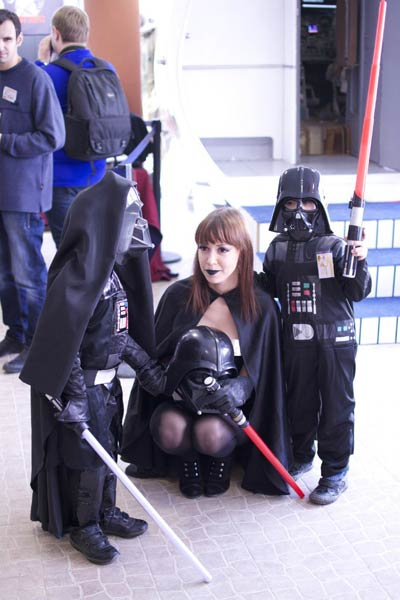 A mother and her two costumed children were among the crowd of fans.

The fans' creative tributes to the saga extended beyond costumes into recreations and performances. Lightsaber fighting, a popular activity, mixes delicate choreography with violent pantomime. Fights can range from the abstract, such as a fight in the dark with illuminated swords that opened the gathering, to decidedly grittier spectacles.

One such fight pitted two young men against each other, overseen by a third, hooded boy who mostly contributed to the atmosphere through his ominous posture. The fighters went at it to the tune of a thundering orchestral soundtrack. The leather-clad fighter lost his weapon, but got it back. Many spins and twirls were executed midair. As a final twist, the deciding move did not involve lightsabers, but rather a snapping of the neck with bare hands. The victor lorded over his limp adversary for our collective benefit. The defeated boy lay motionless for awhile and then hopped up abruptly and scampered off stage-left.

Not all of the performances were so combative. Yevdotia Stepanenko combined ballet and cosplay, performing a semi-classical dance in Leia's ever-popular metal bikini. In addition to performing with the costumed troupe X-Libris, who dance to metal and industrial bands like Rammstein, Stepanenko also dances professionally at various theaters in Moscow and Pushkin. "I love 'Star Wars,'" said Stepanenko, "I think it is a masterpiece, and I became attracted to making costumes as an interesting and creative process." No one I asked could say whether classical ballet plays a role in Star Wars conventions outside Russia.

According to Strizhevskaya, Star Wars fans have a unique way of thinking. "They usually have higher education," she says, "they are clever." Yet not everyone agrees that Star Wars fans are so different from others. "I cannot say that 'Star Wars' fans are unique," insists Oleg Malarev, a member of the Mandalorian Mercs, "we have a great community of 'Star Trek' fans all over the world; 'My Little Pony' has their own club as well." Even amongst their own, the true nature of Star Wars fans remains enigmatic and elusive.