McDonald's has suspended operations at its three restaurants in Crimea indefinitely "due to manufacturing reasons independent of McDonald's," the Ukrainian branch of the U.S. fast-food giant said.

Restaurants in the cities of Sevastopol, Simferopol and Yalta have been closed but employees will be allowed to take up their old positions at other branches in Ukraine, McDonald's said Thursday in an online statement, without elaborating on the reasons for the closure.

The statement also said the company had offered to cover relocation costs for workers and their families, as well as housing for three months following the transfer.

Severance pay would be available for those employees who declined to leave, the company said, adding that it hoped to reopen its restaurants in Crimea "when such an opportunity" arises. The offer of a relocation package for workers suggests that the company does not expect to do so any time soon, however.

About 500 people have been laid off as a result of the closures, most of whom intend to look for new jobs in Crimea, Itar-Tass reported, citing out-of-work employees. 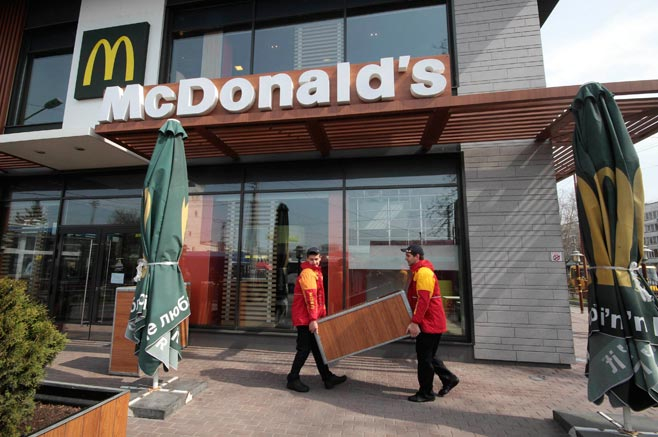 Employees removing a trash can outside one of McDonald’s three locations in Crimea, all of which are now shut.

"We got advance notices, but we couldn't believe it until the last moment, we love our jobs and it was a big shock to us," one former employee said.

News of McDonald's leaving Crimea was mostly received well by Russian Internet users, with several commentators on the Ekho Moskvy website saying that Crimeans will now get healthier, while some remarked that Russia's fast-food restaurants did not have much to offer in terms of healthy food either.

Vladimir Zhirinovsky, the outspoken leader of the Liberal Democrat party, or LDPR, also welcomed Friday's news, telling reporters he would do all he could to bring about the closure of McDonald's restaurants in Russia, Interfax reported.

"I call upon local LDPR organizations to arrange pickets outside every McDonalds branch," Zhirinovsky said, adding that once the "soul" of the fast-food chain had been destroyed, he would seek the removal of Pepsi Cola from Russia as well.