KIEV —  The Ukrainian authorities said Thursday that ousted President Viktor Yanukovych was involved in drawing up plans under which police snipers shot dead dozens of anti-government protesters and hinted at a Russian role in the violent crackdown.

The head of Ukraine's security service blamed the killing of more than 100 protesters in mid-February on the “Berkut” riot police. The killings marked a turning point in the Moscow-backed leader's ultimately doomed struggle to keep power.

He also said representatives of Russia's Federal Security Service agency had been seen at the Ukrainian security service's headquarters during the protests that began in November and that a Russian plane had flown a large amount of explosives into Ukraine.

The hints of Russian involvement could further strain ties with Ukraine's former Soviet master, which annexed the Crimea region after Yanukovych's removal from power in what has become the worst East-West standoff since the Cold War.

"The former government of the country gave criminal orders and a huge number of people suffered in the 'mincer,'" Interior Minister Arsen Avakov told a news conference in Kiev at which details of an inquiry into the killings were announced.

Valentyn Nalyvaichenko, head of the state security service, added: "It was intended as a counter-terrorism operation but effectively the mass murder of people happened directly under the leadership of former President Viktor Yanukovych.

The new government has been under pressure to identify and punish the killers although Yanukovych has denied ordering the killings.

In the final bloody days of the protests, rooftop snipers picked off protesters and medical workers on Feb. 20. Many died on the spot from shots to the neck and scores of bodies were left strewn on the ground in central Kiev.

One day after the killings, which followed three months of mainly peaceful protests over Yanukovych's decision to spurn closer trade and political ties with the European Union, the president fled Kiev. He was deposed by parliament on Feb. 22.

Earlier Thursday, the prosecutor general said 12 members of the Berkut had been detained on suspicion of shooting peaceful participants in the protests. 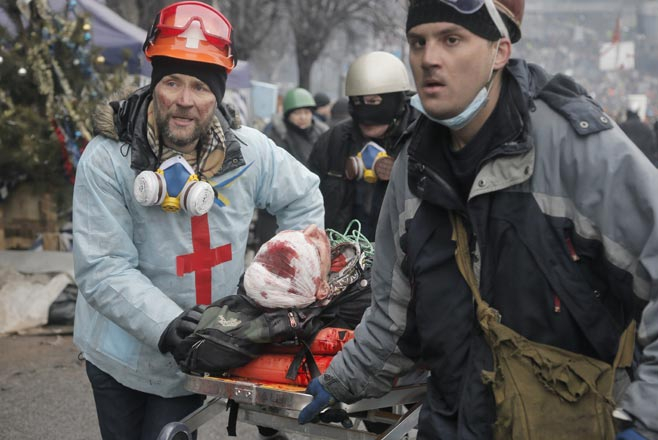 In this Feb. 20 file photo, activists evacuate a wounded protester in Kiev.

Nalyvaichenko said the presence of members of Russia's FSB, a successor of the KGB, at the SBU's headquarters in Kiev implied there had been active Russian involvement in events in Ukraine.

"We have reasonable grounds to believe that these groups … participated in the planning and implementation of the so-called anti-terrorist operation," he said.

The FSB denied any involvement. "Let these statements be on the conscience of the Ukrainian Security Services,” it said, RIA Novosti reported.

Nalyvaichenko also said that planes loaded with 5,100 kilograms of Russia-made explosives and other materials had landed at an aerodrome near Kiev from the Russian city of Chkalovsk in January.

"They brought the means of organizing the shooting and destruction of our protesters on Maidan," he said, referring to the central Kiev square which became the heart of the protests.

Russia has denied any involvement in Kiev's unrest, suggesting that the protests were partly funded by the West.

"We caution against forming hasty and politicized conclusions based on material and hypotheses that have 'suddenly' surfaced," Konstantin Dolgov, a Russian Foreign Ministry official responsible for human rights issues, said on Twitter.

Dolgov said Russia was closely following the "sniper issue, which exposes the cynical and provocative killing during the Maidan rebellion."

The findings of Ukrainian security chief's investigation and the Berkut arrests go some way toward meeting demands for justice over the killings. But many Ukrainians, disillusioned with what they see as a corrupt and mismanaged political system, want more dramatic change.

"The authorities want to appease us with these arrests. [But] they have not done enough and we see only cosmetic changes and we want radical reforms," said Ivan Kochmar, a 37-year-old resident of Kiev.