Russia accused NATO on Wednesday of reverting to the "verbal jousting" of the Cold War by suspending cooperation with Moscow over its annexation of Crimea.

NATO foreign ministers agreed on Tuesday to suspend all practical cooperation with Russia, draft measures to strengthen defenses and reassure nervous Eastern European countries in the worst East-West crisis since the Cold War ended in 1991.

Moscow did not announce any measures to retaliate, but Foreign Minister Sergei Lavrov expressed concern over the moves in a phone call with U.S. Secretary of State John Kerry, Russia's Foreign Ministry said.

"The language of the statements rather resembles the verbal jousting of the 'Cold War' era," Foreign Ministry spokesman Alexander Lukashevich said in a statement.

He noted that the last time NATO made such a decision, over Russia's five-day war with Georgia in 2008, the defense alliance later resumed cooperation of its own accord.

"It is not hard to imagine who will gain from the suspension of cooperation between Russia and NATO on countering modern threats and challenges to international and European security, in particular in areas such as the fight against terrorism, piracy and natural and man-made disasters," Lukashevich said.

"In any case, it will certainly not be Russia or NATO member states."

The Western military alliance issued its latest warning to Russia on Wednesday over its troop buildup on the Ukrainian border. NATO Secretary-General Anders Fogh Rasmussen said that further Russian intervention in Ukraine would be a "historic mistake" that would deepen Russia's international isolation.

"If Russia were to intervene further in Ukraine, I would not hesitate to call it an historic mistake. That would lead to further international isolation of Russia. It would have far-reaching consequences for the relations between Russia and … the Western world. It would be a miscalculation with huge strategic implications," he told a news conference after a meeting of alliance foreign ministers. 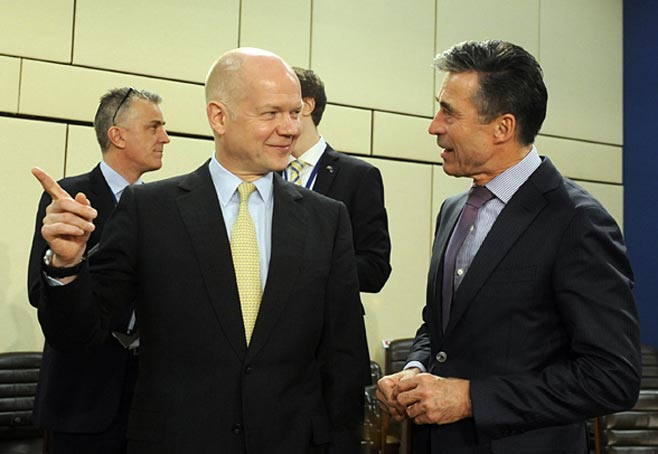 William Hague and Anders Fogh Rasmussen in Brussels on Wednesday.

Russian forces took control of Crimea, a Ukrainian Black Sea peninsula, which then voted to unite with Russia in a March 16 referendum seen as a sham in the West. Moscow formally annexed Crimea on March 21.

The suspension of NATO cooperation with Moscow means Russia cannot participate in joint exercises, although the alliance said that joint work in Afghanistan — on training counter-narcotics personnel, maintaining Afghan air force helicopters and providing a transit route out of the country — could continue.

German Foreign Minister Frank-Walter Steinmeier said Tuesday that NATO's future relationship with Russia would depend, among other things, on whether Russia started withdrawing troops massed near Ukraine's eastern border.

NATO's top military commander said Wednesday that Russia had massed all the forces it needs on Ukraine's border if it were to decide to carry out an "incursion" into the country, and that it could achieve its objective in three to five days.

Calling the situation "incredibly concerning," NATO's supreme allied commander in Europe, U.S. Air Force General Philip Breedlove, said NATO had spotted signs of movement by a very small part of the Russian force overnight Tuesday to Wednesday but had no indication that this was part of a withdrawal to barracks.

"This is a very large and very capable and very ready force," Breedlove said in an interview with Reuters and The Wall Street Journal.

The Russian force has aircraft and helicopter support as well as field hospitals and electronic warfare capabilities — "the entire suite that would be required to successfully have an incursion into Ukraine, should the decision be made," Breedlove said.

"We think it is ready to go and we think it could accomplish its objectives in between three and five days if directed to make the actions."

Russia has said it has no intention of invading its neighbor, although since the toppling of Moscow-backed Ukrainian President Viktor Yanukovych in February it has asserted a right to intervene to protect ethnic Russians if necessary.