The founder of Russia's largest social network Vkontakte, Pavel Durov, stepped down as CEO of the company after seven years in the post. He announced this on his Vkontakte page on April 1.

“The CEO has significantly less freedom in managing the company after the changes occurred in the Vkontakte shareholders' structure in April 2013,” Durov said. He added that he would continue cooperating with the company as a founder but was not interested in any formal position.

"It has become increasingly complicated to stick to the principles we once founded our social site upon," Durov said in his farewell letter, which included a picture of jumping dolphins with the text: "So long and thanks for all the fish."

As recently as February, Lobushkin had denied reports Durov was planning to resign and refused to comment about possible successors.

Vkontakte, a site similar to Facebook that draws most of its users from the former Soviet Union, has gone through several changes since investment fund United Capital Partners owned by businessman Ilya Sherbovich bought out two of the site's co-founders in April 2013, becoming its biggest shareholder with a 48 percent stake. 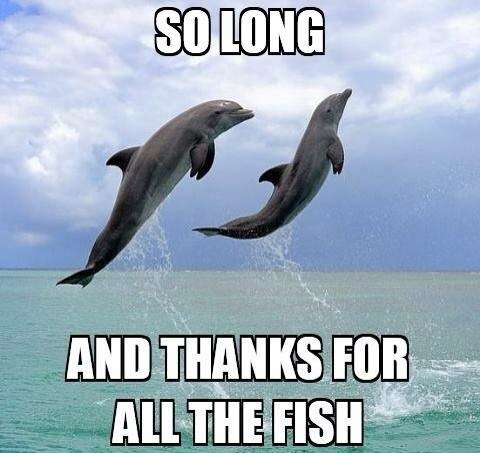 Vkontakte founder Pavel Durov posted this picture along with a note announcing that he is leaving his post.

Since then Sherbovich publicly disapproved Durov's actions, accusing him among other things of using Vkontakte resources to promote the instant messenger Telegram, which, according to Sherbovich, was a rival.

Shortly after that Durov's brother stepped down as technical director of the firm.

After that, more changes took place in the management of the company. Durov's close allies, brothers Ilya and Igor Perekopsky, who held the positions of deputy CEO and financial director, left the company.

Pavel Durov, who created Vkontakte in 2006 and has been founder and CEO of the company ever since, is branded by industry people as the Russian Zuckerberg. In 2013 the biggest Russian social network boasted that 14 million new users had joined it.