Graffiti carved out its own niche in the history of contemporary art, bringing fresh ideas and bright colors onto gray walls of typical city buildings. In Russia, it started in the 1980s, as declining Soviet authority led to a feeling of freedom and a desire to stand up to authority, and gained popularity in the 1990s.

The Moscow Museum of Contemporary Art is calling Muscovites' attention to the often-overlooked artistic value of graffiti with an exhibition to one of the most prominent Russian graffiti artists, the recently deceased Pavel Pukhov,  more commonly known by his pseudonym "Pasha 183."

Pavel Pukhov took his first nickname Xekc and started making graffiti art when he was 14 years old. While he initially worked underground and preserved his anonymity, a report by British newspaper The Guardian comparing him to famous English graffiti artist Banksy brought him international fame, and he was subsequently invited to create works at international festivals and even a set design for a musical.

In archival footage included in a recent documentary made about the artist, Pukhov describes his work as part of "the war against advertising, the war against the profanation of culture," and some of his most startling works are those that explicitly refer to politics and the rejection of authority.

In 2012, after the protests following Putin's return to power and a flawed parliamentary election were violently suppressed, Pukhov pasted life-size cutouts of riot police officers over the doors leading to a Moscow metro station, forcing Muscovites to shove the police out of the way as they proceeded on their daily commute. In another work, he painted an enormous image of a masked protester with a Molotov cocktail underneath a bridge, even lighting a fire to create the impression that the Molotov cocktail was real.

Pukhov embodied in his works the idea of the overwhelming presence of big business, vulgarity, commercialization and loneliness in modern society, painting his messages on widely varied surfaces, such as walls of deserted factories and the sides of trains. Due to his choice of locations, many of his works are very hard to find, and some have already been destroyed. 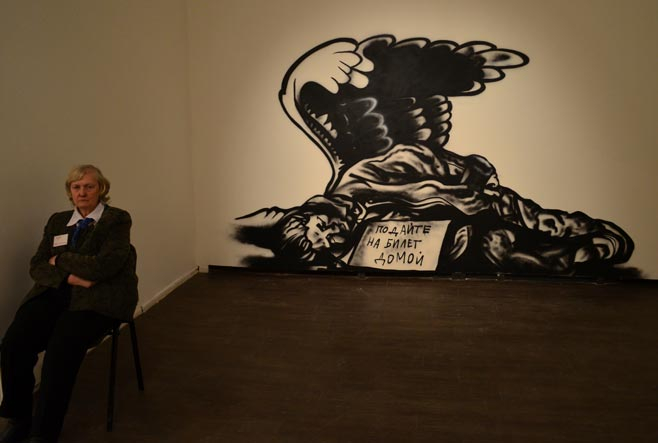 While many of his works involve protest, Pukhov in fact had little interest in politics. "I do not think of myself as a political artist … for me, politics is  even more filthy than advertising," Pukhov said. Many of his works avoid overt references to protest themes and simply seek to amuse viewers, like a lamppost turned into an enormous pair of glasses, a concrete slab painted as a bar of chocolate and a row of gorillas pasted onto a wall with bananas hung in front of them. Pukhov's works make viewers re-examine "ordinary" objects and scenes.

Pukhov broke into the mainstream with a work that involved hanging a miniature "space invader" under an overpass above a crowded Moscow road. The work, which resulted in a road closure and intervention by bomb squads who feared that the work was an explosive device, got the attention of international media, who dubbed Pukhov "the Russian Banksy" after the overwhelmingly profitable British graffiti artist.

At a recent screening of "Pasha 183," a documentary film about the deceased artist, organizers seemed unenthusiastic about comparing Pukhov to Bansky, noting that Pukhov rarely took any money for his work and never tried to market himself the way that Banksy has managed to do.

Regardless of his lack of marketing, Pukhov's popularity seemed to be growing exponentially when he died last April at the age of 29. Now, the only place to see his works is the MMOMA retrospective, though showing street art in a museum setting presents difficulties — most of the works are photographs of Pasha 183's creations, with some recreated paintings and even a model of Pukhov's home.

The exhibit is nicely complemented by the documentary film "Pasha 183," made largely out of archival footage recorded by the artist himself. Here, we can listen to Pukhov explain his works in his own words and even watch as he creates some of his more surprising installations. The documentary film is only 40 minutes long, yet allows viewers to see Pukhov face-to-face — though the artist remains masked for most of the film.

Even though Pukhov has passed away, the new attention that his works are being given by Russian museums and the efforts made by his friends to preserve his memory will help to ensure that he becomes an example for young graffiti artists and a reminder that even Russian graffiti can become internationally renowned artworks.

The exhibition "Pasha 183" is on display until May 25 at the Moscow Museum of Modern Art, at 10 Gogolevsky Bulvar. The Pasha 183 documentary film can be seen here.