As the State Duma approved plans to absorb Crimea into the Russian Federation last week, prominent Russian rock bands and musicians have been speaking out against the annexation.

Following a vote by the Federation Council on March 1, which unanimously supported President Vladimir Putin's plans to intervene in Ukraine, the hugely popular singer-songwriter Zemfira posted an amateur live video on her website in which she performed a song by Ukrainian band Okean Elzy.

Introducing the song, Zemfira offered words of support to Ukrainian musicians: "There is more money in Russia, but there is more soul in Ukraine," she said before calling its author, Svyatoslav Vakarchuk, "Ukraine's most talented composer."

Zemfira's video was replaced on her website by the word "Reconstruction" on March 10, but on the same day Zemfira posted a fragment from the Russian film "Stalingrad," where dark battle sequences in the totally destroyed city were accompanied by her piano-backed cover of the Kino song "Legend."

While Zemfira commented using only music and video, without making any verbal statements on the planned military intervention of Ukraine, other musicians were more forthcoming.

The frontman of Mashina Vremeni, Andrei Makarevich, spoke out even earlier, when the news about the Russian troops arriving in Crimea first broke.

Makarevich, whose band Mashina Vremeni performed at the Kremlin's election event in 2008 and who hosted a meeting of rock musicians with then-President Dmitry Medvedev in a Moscow club in 2010, was surprisingly articulate and uncompromising.

"I am worried about what is happening in Ukraine," he wrote on the Snob.ru website on Feb. 28.

"But much more, I am worried about what is happening [in Russia]. […] I cannot remember such unbridled propaganda and such amounts of lies since the height of the Brezhnev era. […] Guys, we will have to live with the [Ukrainians]. We will still live next to one another and it is desirable that it be in a friendly way. How they should live, they will decide themselves."

On March 9, Makarevich briefly commented on the situation again.

"How fast everything has returned to the Soviet Empire with its 'we unanimously approve' and 'we angrily condemn,' with military invasions wherever we find necessary and a confrontation with whole human world!" he wrote.

When accessed March 14, no articles were available on Snob.ru. Instead, a notice stated that they could be accessed only by members of the website.

For his views, Makarevich found himself on a new website called Traitors — created by an anonymous group who set as their goal the exposure of Russian citizens who "insult our soldiers and dispute the necessity of fighting neo-Nazis [i.e. Ukrainians], however talented journalists, authors or directors they may be."

Apart from opposition leader Alexei Navalny, who is now under house arrest and whose popular blog was blocked in Russia by order of prosecutors on March 13, and a number of opposition activists and journalists, the website blacklisted music critic and producer Artemy Troitsky for writing, "Ukraine gained its freedom through suffering; it will be uneasy and troublesome there, but everything will end well," on his blog on Ekho Moskvy radio's website on March 3.

Called "Don't Shoot," after Shevchuk's earlier song written during the Soviet war in Afghanistan in the early 1980s, the lyrics state: "We, the people of Ukraine and Russia, are relatives. Each of us simply must do everything possible not to allow the fratricidal slaughter. Otherwise, inhumanity will prevail."

Shevchuk went on to record a statement against the planned military intervention of Ukraine with his St. Petersburg counterparts Boris Grebenshchikov of Akvarium, Vyacheslav Butusov and Maxim Leonidov, which was shown on Ukrainian television channel 1+1 on March 5. 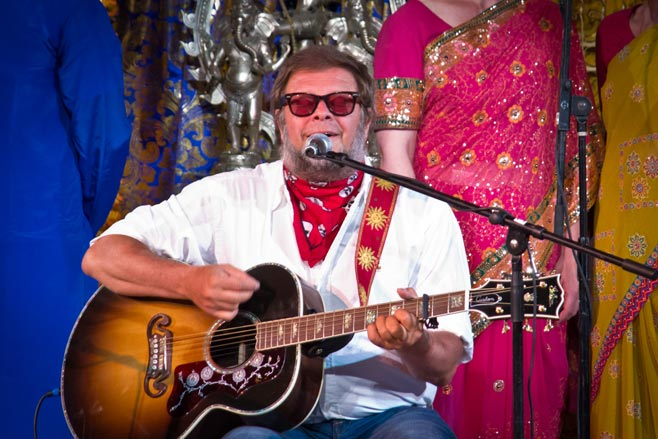 Boris Grebenshchikov complained about Rossia 1's use of his music.

One after another, the musicians spoke about the attachment between Russians and Ukrainians, and against war. The video ended with Shevchuk urging people to "do everything they can to avoid a war" and DDT performing an acoustic excerpt from his song "Don't Shoot."

Grebenshchikov's song, "Train on Fire," was used in a program by journalist Arkady Mamontov on the state television channel Rossia 1. The song's excerpt with the words "It is time to take this land back" was recorded over footage of the now-disbanded Berkut riot police attacking protesters on Maidan.

Recorded by Akvarium in 1987, "Train on Fire" was a protest song urging people to deal with the 70 years of the Soviet era and get back to normal life, free of enforced ideology.

In the Rossia 1 version on Feb. 25, it was used to support state violence and repression.

Grebenshchikov reacted several days later. "I am touched that you decided to use an excerpt from my song 'Train on Fire' in your program," he wrote on his Facebook page addressing the channel's editors.

"But once you do it, have the courage not to tear out a line from the song, but play it in full, including the words, 'I saw generals, they drink and eat death.'"

Most recently, both Shevchuk and Grebenshchikov signed an anti-war letter from Russian intelligentsia on March 13 as a reaction to an official petition in support of Putin's policy over Ukraine and Crimea published on the Culture Ministry website on March 12.

"We are against war against Ukraine and hostility with the world community. We stand in solidarity with all those who do not bend and do not yield to lies," it said.

In a statement on March 5, the Pskov Oblast department of the Communist Party of the Russian Federation called for a "ban on concerts by fascists' minorities," claiming that "Matryoshka" presents Russia and the Russian language as well as Soviet leaders in a bad light.

Lyapis Trubetskoy reacted to the ban on their Facebook page.

"Because after all these Pskov statements, boycotts and bans, the number of people who listened to the album 'Matryoshka' and watched the video from this album increased many times! Thank you, fathers, for solidarity and brotherly help!" the band wrote.