DONETSK, Ukraine — Many fences and walls of this city, which is often labeled the capital of Ukraine's industrial heartland, have both pro-Russian and pro-Ukrainian slogans written on them.

On one such wall, the graffitied words "Donetsk is Russia" are written over "Donetsk is Ukraine" — part of a PR battle that highlights the region's convoluted history and culture.

Those who are traitors for some can be heroes for others in this eastern part of Ukraine, where Russian is spoken commonly and the border with Russia is only about 100 kilometers away. When it comes to Russia's annexation of Crimea, some consider it an act of aggression, while for others it is an example to follow.

"The Olympics have saved us, otherwise Putin would have invaded eastern Ukraine earlier — there were tanks all over the border a long time ago already," said Zoya Berezhnaya, 59, an engineer from Donetsk with extensive family connections in Russia.

"We had to build trenches to protect ourselves from imminent Russian aggression," she said, sitting in the compartment of an overnight train traveling from Sevastopol in Crimea to Donetsk on Wednesday. 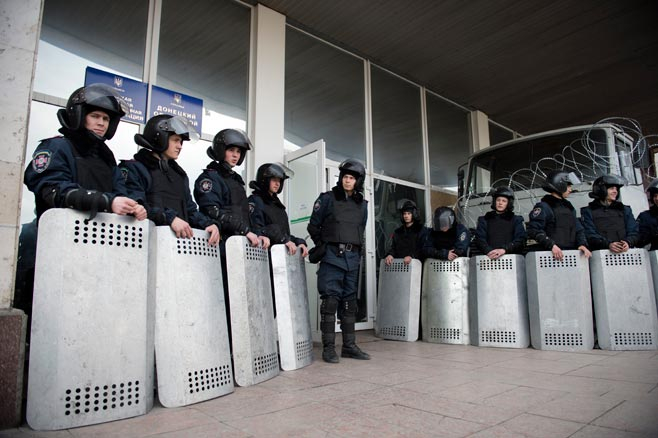 Every hour or so, Berezhnaya's phone would ring and vibrate wildly, with her husband and son calling to check on her. They were worried that an official border had already been installed between Crimea, which on Tuesday was declared a Russian region by President Vladimir Putin, and the rest of Ukraine.

But there was no border yet and the journey went smoothly, belying the notion that there was a conflict looming outside the train's gloomily lit windows. Yet other divisions are already appearing — Berezhnaya said that she is registered in Crimea and thus can be forced to adopt Russian citizenship, while the rest of her family is registered in Donetsk, making it possible for them to hold different passports.

Not everyone in the industrial town of Donetsk shares Berezhnaya's apprehensive attitude toward Russia. The city of about 1 million people, which has rarely seen a more crowded event than a football match of its local football team, has in recent weeks been the scene of several large-scale pro-Russian rallies. Protesters captured the local administrative headquarters several times in March only to lose control to Ukrainian authorities.

MT traveled to Donetsk, eastern Ukraine, a region where those who are traitors for some can be heroes for others.


Sergei Taruta, the new governor of the Donetsk region, appointed by the new federal authorities in Kiev to help rein in control of the increasingly tense situation, had a 2.5-meter-deep trench created along the 150-kilometer-long border with the Rostov region of Russia in just a few weeks. Ukrainian tanks and soldiers were transferred to the border from other regions in order to be able to respond swiftly to a potential invasion.

But on many occasions Ukrainian citizens themselves have defied these measures, blocking roads and not letting military equipment pass through their villages. In other areas, self-defense units have been formed to fight against Russian soldiers if they cross the border.

"The truth is that Taruta has built these trenches not against the Russian army, but against us, so we would not run away to Russia en masse," said Galina Nazarova, 56, standing on one of Donetsk's main squares on Thursday afternoon. 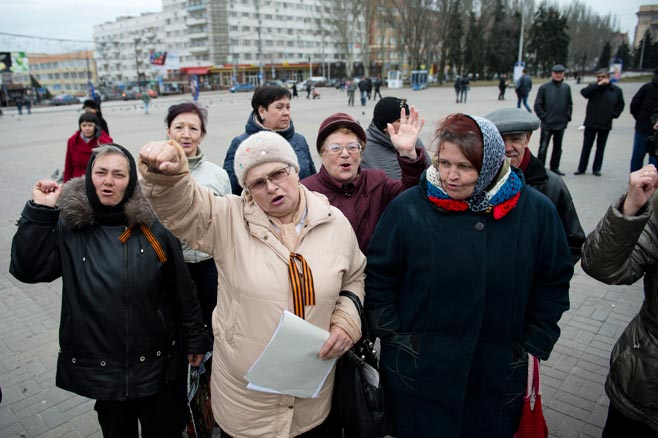 A group of pro-Russian women protesting on Lenin Square.

Berezhnaya dismissed these sentiments as unrepresentative of the majority, saying that these people were sent by the Party of Regions led by ousted president Viktor Yanukovych, who fled to Russia after facing intense pressure from Kiev protesters to resign.

A group of pro-Russia activists is permanently stationed in front of a monumental Lenin statue in Donetsk, while across the road is the city's fanciest hotel, the Donbass Palace, which is owned by Ukraine's wealthiest man, Rinat Akhmetov.

As in many other places across Ukraine in this tumultuous period, people in Donetsk are struggling to distinguish reality from what they see as myths propagated by fraudulent media. When one group of residents expressing pro-Russia views was asked about mushrooming rumors that at least 10,000 Russian activists were sent to Ukraine to stir up protests, they all showed their Ukrainian passports with agitation.

"Tell them in Moscow that we have much more in common with Russia than with these Nazis from the West!" exclaimed Alexander Abelov, 49, a factory worker from the neighboring town of Makeevka.

Russian officials and media reports have repeatedly depicted the new regime in Kiev as being led in part by Nazi-like nationalist thugs, a representation that the regime itself and Western governments reject as patently false.

Another woman, unable to hold back tears, said she was unable to visit the graves of her family members across the border in the Russian city of Volgograd because she did not have money for a ticket, highlighting the deepening economic crisis in Ukraine.

"Now they will introduce visas, so it will be impossible for me to go see my relatives and friends at all," Tatyana Kolesnikova said. 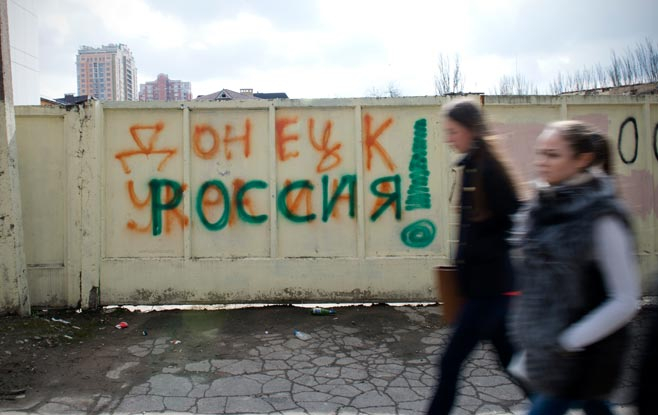 On Tuesday, the head of Ukraine's National Security and Defense Council, Andrei Parubiy, ordered the country's Foreign Ministry to introduce a visa regime with Russia, although the government later said the new policy would not be pushed through quickly.

The crowd shouted that the ranks of protesters were thin only because people were being harassed at work.

"There are cameras here above the square with security people taking record of all of us," Abelov said, pointing toward a roof atop one of the grand Stalinist buildings that surround the square. On top of the roof sits a green advertisement for Russia's state-owned Sberbank.

It was not possible to verify the claim regarding security cameras, but workers at a local shop said its owners were "forced" by the new government to install Ukrainian flags on its roof.