The most fertile and adventurous period in the history of sound experiments is arguably from 1910 to the late 1930s, when they were developed around avant-garde ideas. The theremin, noise orchestras, paper sound, syntones, audio computing, ornamental and graphical sound — these are just some Soviet experiments in sound art and technology that have since then been left buried deep in the archives of history.

The work of the pioneers of sound art was cut short by Stalin’s totalitarian regime as they often did not fit in with the regime’s vision and were outside of officially accepted aesthetics or any state priorities. Nearly forgotten, countless unfinished ideas and projects that did not have the chance to develop were left behind, only having been recently unearthed and documented in a number of research projects from Russia and abroad.

One of them is by artist and historian Andrey Smirnov, whose years of research has culminated in the book “Sound in Z,” a treasure trove of visual and textual material never seen before, let alone in English.

A sample taken from "Rhapsody" by Ferenc Liszt, programmed on the variophone by Yevgeny Sholpo in 1935 with the assistance of Georgy Rimsky-Korsakov. (Courtesy Andrey Smirnov)

The Theremin Center, of which Smirnov is founding director and senior lecturer, is located in the Center for Electroacoustic Music at the Moscow State Conservatory. It was established in 1992 in the former space of NIMI, the Acoustical Laboratory of the Scientific Research Institute for Music, established in 1933 as a successor of GIMN, the State Institute for Musical Science, founded 1921, where Leon Theremin began his career. It was still active in academic research in the 1960s and 1970s, but its activities faded out, especially during the 1980s and perestroika, because of a lack of funding and a lack of people, many of whom emigrated or retired. By the early 1990s, it was almost empty, Smirnov explains.

“I had some equipment and some crazy ideas, and there were many composers and artists who also had some unusual ideas but no means to realize them, so with this we could share our resources,“ he tells me about the Theremin Center’s early days.

But when the Center was established, he not only inherited the spaces of the former musical research institutes, but also their archives, which came with some private collections.

These documents were shown at “Generation Z,” an exhibit that that he co-curated with Lyubov Pechelkina, part of the 15th edition of the Club Transmediale festival, held in Berlin, which bills itself as a “festival for adventurous music and art.” Its theme this year was “Dis-Continuity,” which the organizers say reflects “attempts to explore and map fragments of an alternative or neglected history of electronic and experimental music that still waits to be fully written.”

The exhibition, which closed late February, was an expansive display of documents, diagrams and soundtracks of the period from 1910 to 1930, was the festival’s centerpiece, and highlighted the role the Soviet Union played to the birth of electronic music, sound synthesis and audio technology in the early 20th century.

“Many ideas and aesthetic approaches are also very up to date, especially for musicians … they find a lot of aesthetic and technological ideas which are very clear to them. They find out that people in the 1920s were trying to develop a similar kind of music, which we cannot really even listen to because there were almost no recordings at that time,” Smirnov said about the exhibit. 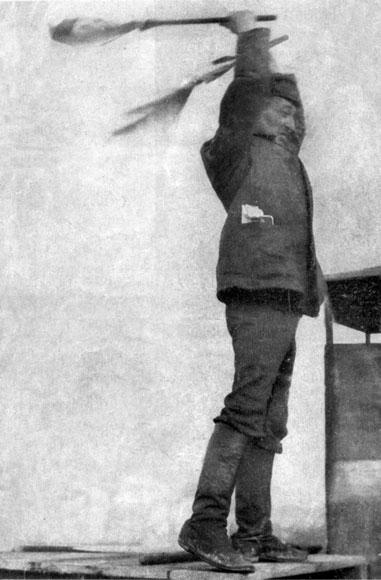 Arseny Avraamov standing on the roof of the tallest building and using flags to conduct the Symphony of Sirens in Moscow, 1923.

The influence of science in the cultural life of post-revolutionary times was very much based on the idea of cross-disciplinarity, and Smirnov reminded me that it was extremely common at that time that musicians were learning mathematics or physics. After the revolution, when materialistic ideas became very well-supported by officials, artists had a belief that if they would develop new art and new music based on scientific approaches, it would definitely lead to a new and more powerful future culture. It led to a transformation of public consciousness and affected political and social spheres, but many ideas and projects would today be described as science fiction, though they are beginning to be seen in a different light.

“I think that they had the best time sometime around 1921 to 1923,” he says of sound artists and the avant-garde. “In the early 1920s, it was still possible to develop radical theories, because they were supported by Trotsky and Lunarcharsky. After Trotsky’s exile, some support was still possible until the late 1920s, before the new economic policy was finished. But almost never after that.” After 1932, all institutions and organizations independent from the state were closed, leaving only big unions and collectives, and a dearth of radical ideas.

First shown in 2008 at Paris’ Palais de Tokyo, the exhibit has expanded greatly since, and in Berlin incorporates for the first time the “Reconstruction of Noise” exhibit produced by artists and researchers Konstantin Dudakov-Kashuro, Peter Aidu and Yevgeniya Vorobyova. Their display focused on revolutionary Soviet noise orchestras, who often played brooms, sticks, doorbells and other mechanical devices to recreate the sound of the city and its industrial activity, as Arseny Avraamov famously did with his “Symphony of Sirens” in 1922.

Also on display were Soviet-made instruments of the early 20th century such as the theremin, terpsitone and rhythmicon, some of which visitors could also try to play on, and reconstructed mechanical noise instruments originally invented by Vladimir Popov, such as the bottlephone — a percussion instrument made of hanging bottles — or a saucepan drum. Popov’s innovations were crucial when sound cinema was introduced in the early 1930s.

Smirnov explains the connections: “Noise music was very important trend in the early-middle 1920s in Russia. Firstly, it was kind of a popular amateur activity to build instruments because of a lack of available instruments. On the other hand, it was something very secret and hidden from the public, behind the walls of the most radical theaters.”

A clip from the soundtrack of the film "Nice Life" (Boris Yurtsev, 1932), with noise music by Nikolai Krukov and noise machines by Vladimir Popov. It also incorporates an electronic component — the sound produced by the theremin, which was used as a noise instrument. (Courtesy Andrey Smirnov)

These included Solomon Nikritin’s Projection Theater, located for a while in politician and poet Alexei Gastev’s Central Institute of Labor, Nikolai Foregger’s constructivist theatrical studio “MASTFOR,” and the First Worker’s Theater of Proletkult, at that time helmed by acclaimed film director Sergei Eisenstein.

While they did important and interesting experiments, they were mostly hidden, so their history is mostly forgotten. For example, in the 1920s, Gastev was an extremely well-known and popular figure, and his institute had good support, but he is almost forgotten because he was arrested in 1938 and subsequently executed, and his archives were closed for many years.

“I think most, or the majority of artists were anarchists, and this anarchical approach, I consider a kind of ‘network culture.’ In the early 1920s, it was definitely a culture based on a unit, cross-connected, without any central authority above them, and all of them were collaborating,” said Smirnov.

According to Solomon Nikritin’s philosophy of Projectionism, the real artist is not a producer of consumer goods, but of “projections of the method.” The method, therefore, invented by the artist, becomes the purpose of the creative process, and the spectator gains not cultural satisfaction, but creative inspiration. In the context of Projectionism, even faults and paradoxes gained a new constructive sense and value.

In that, Smirnov sees many parallels with collaborative and DIY cultures today, which “is similar to what was going on in Soviet Russia in the early 1920s. A kind of anarchical network of people, who come not to earn money, but to develop something for the future. It is also about self-development, about new technology.” Smirnov says that these themes resonated strongly with audience for the exhibit, whose average age was about 25.

As more official state archives are being opened, Smirnov is looking forward to even more research. “It is a part of history that was erased. But this does not mean that [experimental arts of] the 1920s did not have any significance. I am sure they were actually more well-known, and that these ideas were more widespread than we can expect now. But for that, we need more confirmations.”

"Sound in Z: Experiments in Sound and Electronic Music in Early 20th Century Russia" is published by Koenig Books, London.