President Vladimir Putin on Tuesday signed a treaty to add Ukraine's breakaway region of Crimea to Russia, expanding the country for the first time since the Soviet collapse, despite the threat of Western reprisal.

In a 45-minute speech preceding the accession agreement signing, Putin sent a message to the West that Russia would not dismember Ukraine further, as pro-Russian rallies in Ukraine's southeastern provinces bordering Crimea could have suggested.

He used harsh language to lash out at the U.S. and Europe for what he described as their "might makes right" global policy, accusing them of stoking violent pro-Western riots in Ukraine's capital Kiev, which led to the ouster of the country's president last month.

Putin started the speech in the Kremlin's St. George Hall — a delivery filled with raucous applause — by highlighting Crimea's longstanding close ties to Russia, since the Russian Empire annexed the Crimean Khanate in 1783.

"Literally everything in Crimea is imbued with our common history and pride," Putin told Cabinet and parliament members and three top officials from Crimea. "It is here in ancient Chersonesus that Prince Vladimir was baptized."

The baptism of Vladimir the Great of Kievan Rus in what was part of the Byzantine Empire in 988 is considered the start of the conversion of Russians to Orthodox Christianity.

The Crimean officials present during the speech — Sergei Aksyonov, acting prime minister of Crimea, and Vladimir Konstantinov, speaker of Crimean parliament — are under both U.S. and European Union sanctions for their role in Crimea's secession from Ukraine, which the West has branded as running counter to international law. They took seats in the front row between Russia's second person in the executive chain of command, Prime Minister Dmitry Medvedev, and the third person, Federation Council Speaker Valentina Matviyenko, the latter being under U.S. sanctions for the same reason.

In an apparent attempt to soothe the opposition of native Tatars to the region's new allegiance, Putin said their mother tongue would rank as a state language in Crimea equal to Russian and Ukranian, an upgrade from its status in Ukraine. Tatars suffered a deportation order by Stalin on the grounds that they were not loyal to the Soviet government during World War II. They have since then returned home but remain wary of Russia.

Putin continued by lamenting the handover of Crimea to Ukraine by Soviet leader Nikita Khrushchev in 1954, which was a formality when the Soviet Union was one country. But the breakup of the union left Russia feeling "robbed" of its territory, he said.

The president then commented on the protests in Kiev that swept away the government of President of Viktor Yanukovych last month. Putin said he was able to understand peaceful rallies against officials that neglected the lives of ordinary citizens. Regarding the overall depressed economic situation in Ukraine, he said about 3 million Ukrainians worked in Russia last year, earning $20 billion, which constituted 12 percent of Ukraine's gross domestic product.

Going on, Putin reiterated the stance that Russia was unable to tolerate threats to ethnic Russians in Ukraine from "radicals" that, he said, controlled the new government in Kiev. He rejected the accusations from the West that the referendum in Crimea didn't comply with international law.

Putin fired back at the leading Western powers, blaming them for trying to tailor this law to their own needs. He cited NATO's intervention in Serbia and Kosovo, and attacks on Afghanistan, Iraq and Lybia.

"Led by the U.S., our Western partners prefer in their practical politics to be guided not by international law, but by might-makes-right law," Putin said. "They have come to believe that they are chosen and exceptional; and that they have the license to decide the fate of the world; and it is only they that can always be right.

"That's how things went in Yugoslavia … in 1999. It was difficult to believe. I could not believe my eyes, but at the end of the 20th century one of the European capitals came under bombing raids for several weeks, and then a real [military] intervention ensued."

Putin said the West had crossed the line in Ukraine, apparently implying that Western diplomats stoked the protests. As a home to millions of Russians, Ukraine is too important to Moscow, he said.

"If you push a spring too hard, it will bounce back with force at some point," he said. "This should always be remembered."

Putin urged the West to "stop the hysterics" and "Cold-War rhetoric" and accept that Russia is an "independent and active player" in global politics, which has its own national interests.

In reference to Ukraine's potential to join NATO, Putin said, I'd prefer NATO sailors arrive in the port of Sevastopol as our guests, and not that we arrive as their guests. 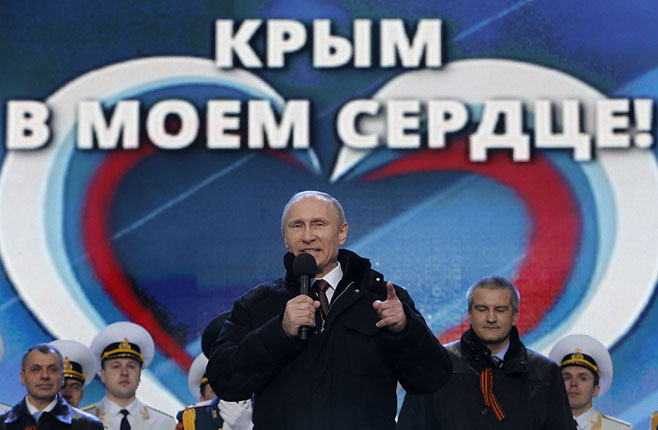 Putin addressing the audience during a rally at Red Square on Tuesday.

He made a point of offering some other similarities between Crimea's secession and previous events. Appealing directly to Americans, Putin said a people who made a declaration of independence and put freedom above everything else should understand the craving of Crimea to make a free choice. "Understand us," he said.

Germans went through a post-World War II division of their country and are bound to support the joining of two Russian lands, he said, especially since Russia so whole heartedly supported German reunification.

He finally turned to Ukrainians, saying that Ukrainian nationalists were responsible for the divisions in the country. Putin promised Russia would not lay claim over other Ukrainian regions.

"I want you to hear me, dear friends. Do not trust those who scare you with Russia, and yell that other regions will follow Crimea. We do not want a division of Ukraine. We do not need it," Putin said.

Under the accession agreement signed Tuesday, Crimea will hold elections for local authorities in September next year.

Crimea's capital Simferopol on Tuesday largely continued to celebrate the reunion with Russia. People were chanting "Russia!" while listening to Putin's speech in central cafes and bars.

But some of the students at the Crimea Medical University were not ready to stay at what suddenly became a foreign country.

Yulia, 17, a first year student, said that she, along with a few fellow students, will ask for transfer to a Ukrainian university.

"I am not against Russia … but I want to study in my own country," she said at the university's lobby. "I will go to Ukraine." She declined to give her last name, citing privacy concerns.

In Moscow, tens of thousands of people on Tuesday attended a rally on Red Square and Manezh Square in support of Russia's acquisition of Crimea.

Many of those present represented various state companies and organizations, with media reports saying that employees are either forced to attend the rally by their management or given incentives to do so.

Sergei Burov, a 36-year old specialist who said he had been sent by geodesy company Mosgorgeotrest, said that he supported Russia's takeover of Crimea, though he was against a war with Ukraine.

"Historically, Crimea should be a part of Russia," he said.

A group of activists of the Young Guard, United Russia's youth branch, shouted "We believe Putin!"

Polina Rednik, a 16-year old member of the group, said that Alaska, purchased by the US from Russia in 1867, would be Russia's next acquisition after Crimea.

A flood of people started leaving Red Square immediately after the rally began. Some posters, reading "Putin is right" and "Obama, take care of Alaska" were left on the ground.

Tatyana Stanovaya, a France-based analyst of the Center of Political Technologies, said the message Putin sent in his speech was that Russia didn't want to be isolated. He is offering a chance to mend relations with the West on his terms: the West closes its eyes on the Crimean secession, and Moscow will not escalate the situation in Ukraine, she said.

As some other bargaining chips, Putin could defuse some tensions by pushing Yanukovych to formally step down as Ukrainian president, thus allowing Russia to recognize the current government in Kiev, she said. Moscow could also give Kiev some slack with the huge debts Kiev has racked up for natural gas, she said.

Lilit Gevorgyan, a Russia analyst in London at consultant IHS, agreed that Putin appeared to assure the West that Moscow wasn't willing to chip off more of Ukraine.

Putin and Shoigu's outings into the Siberian wilderness have become a regular fixture.
russia's response

The Investigative Committee has opened a criminal investigation.