In the final hours before Sunday's referendum in Crimea, Russia's cultural community experienced a schism it has not known since the run-up to the presidential election in 2012. At that time 30 or 40 major Russian entertainers and artists caused a firestorm by agreeing to make short videos supporting the candidacy of then-Prime Minister Vladimir Putin.

This time the culprit was a letter titled "Russian cultural figures in support of the position of the President in regards to Ukraine and Crimea," that was published March 11 by the Russian Culture Ministry. It was originally posted on the ministry website with some 100 signatories. Many were household names, such as violist Yury Bashmet, conductor Valery Gergiev, violinist Vladimir Spivakov, actor Oleg Tabakov and film director Pavel Lungin. By midday Sunday over 500 people had attached their names to the letter.

In full the text reads, "In the days when the fate of Crimea and our countrymen is being decided, Russia's cultural figures cannot remain indifferent, cold-hearted observers. Our shared history and shared roots, our culture and its spiritual sources, our fundamental values and language have always united us. We want the commonality of our peoples and our cultures to have a strong future. This is why we firmly declare our support of the position of the President of the Russian Federation in regards to Ukraine and Crimea."

The reaction among those with dissenting views was swift and harsh, bringing about what novelist and playwright Alexei Slapovsky called a "war of signatures" on his Facebook page. (For ease of reference, unless noted otherwise all quotes below are from Facebook, Russia's primary virtual political soapbox.)

Writer Lev Rubinshtein replied, "It is simply impossible for a decent man of clear mind and firm memory to sign his name to any (any!) document, in the text of which the words 'support' and 'President of the Russian Federation' stand next to each other without particles or conjunctions."

Rubinshtein's comment — much longer and complex than the excerpt provided here — struck a chord among many. Over 1,200 readers hit the "like" button and over 200 people shared his text.

Soon, another letter, an "appeal from the initiative group for a congress of intellectuals 'against war, against the isolation of Russia, against the restoration of totalitarianism,'" appeared on the pages of Novaya Gazeta and was signed by 100 prominent writers, actors, directors and journalists. In part, it stated that "the opinion of that part of the intelligentsia, which does not agree with the policies pursued by the authorities in the existing situation, must be formulated more clearly and resonantly. For that it is necessary in the next few days to conduct a congress of the Russian intelligentsia with invited representatives from the Ukrainian intelligentsia." 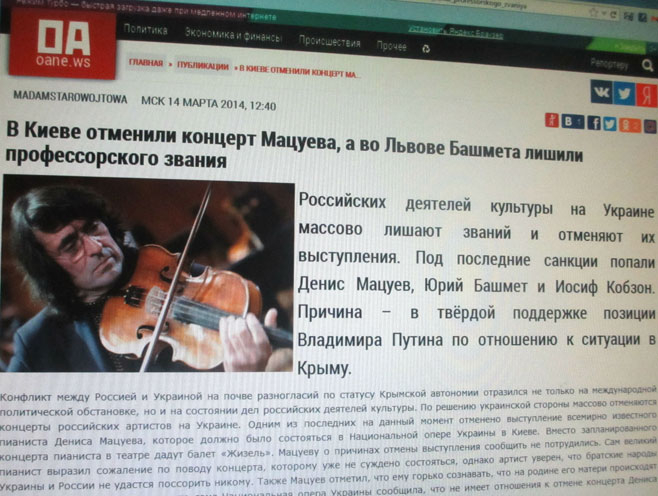 The OA News website carries an article about reactions in Ukraine to major Russian artists signing a so-called "pro-Putin" appeal.

Harsh commentary aimed at those who signed the so-called "pro-Putin" letter continued into the weekend. Many of the signees took to the internet to explain themselves.

The highly respected St. Petersburg director Andrei Moguchy penned a long text in which he explained how he was asked in a phone call to sign and how the letter was described to him.

"I have not taken back my 'telephone signature,' and I do not pretend that, 'oh, I did not hear what was said on the phone,' or 'well, if SO-AND-SO and SO-AND-SO signed, then I do, too.' I signed it and that is that. Afterwards I had a very difficult day, night and day."

Also explaining himself was Eduard Boyakov, the rector of the Voronezh Academy of the Arts.

"I appeal to those who don't agree with the Kremlin's official position on Ukraine. Take a step back, don't heap all your complaints on the authorities. Take a sober look. Do you really not see that Ukraine is becoming a hostage of America? Just like Belgrade or Iraq. Do you really not see that aggression is coming from the West, not Russia? I see it and so I signed [the letter]."

There have been repercussions for at least three signers of the original letter supporting Russia's policy in Ukraine.

Bashmet, who grew up in Lvov, was deprived of his title of honorary professorship at the Lvov National Musical Academy. Pianist Denis Matsuev was scheduled to perform at the National Opera in Kiev, but his concert was canceled by the organizers. Actor Sergei Bezrukov planned to lead his Moscow theater on a tour of Georgia in May, but in a sign of solidarity with Ukraine the Georgian Chamber of Culture canceled the performances.

In the eyes of some, the letter composed by the Ministry of Culture precisely intended to cause confusion and infighting among the intelligentsia.

"The goal of the government is to split society," wrote playwright and director Mikhail Ugarov in regards to the "pro-Putin" appeal. "It does not need this [expletive] letter, they can start a war without it. What they need is 100 people deep in [expletive], justifying themselves while the rest of us plug our noses and say, 'Phew'!"