SIMFEROPOL, Ukraine — There seemed to be little doubt about Sunday's vote in Crimea being mostly in favor of joining Russia, but locals had divergent views about how fair the vote was.

The pro-Russia voters interviewed by The Moscow Times spoke about the "unity of Crimean people," "the right to self-determination" and "free vote," while others speculated that "the ones who voted were all on the Kremlin's payroll."

And while many residents in Crimea could be seen celebrating the referendum on Sunday and waving the Russian flag, the U.S. and the European Union united to denounce the vote as illegal.

Crimea goes to polling stations to decide whether the peninsula will rest within Ukraine or join the Russian Federation on March 16.

U.S. Secretary of State John Kerry said the U.S. would not recognize the outcome of the vote, and the EU's Jose Manuel Barroso and  European Council President Herman Van Rompuy both echoed that, also calling on Russia to withdraw its troops from Crimea.

As of Sunday evening, more than 70 percent of the population had cast their votes, Crimean Prime Minister Sergei Aksyonov said, Interfax reported. More than 200 voting precincts were in operation Sunday, with more than 1,700 observers, according to the official website of the referendum.

"Turnout is already at more than 70 percent. More than one million people came to vote," Aksyonov said. 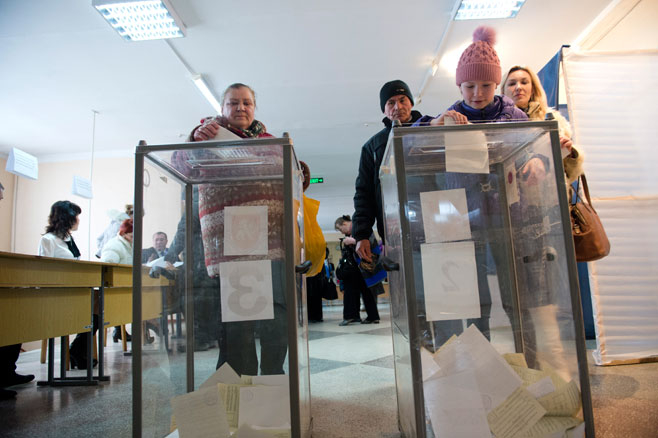 Voters dropping their ballots into boxes at the 08099 election precinct in Simferopol.

According to members of the Republican Institute of Political and Sociological Research, which was responsible for conducting exit polls, only one person voted in favor of Crimea remaining under Ukraine's authority, at the 08114 election precinct in the Kamenka district of Simferopol. The district had about 2,000 voters, half of which had cast their vote by noon.

Zhana Nikitenko, the head of the local election commission, praised the election process and brushed off all concerns about hasty preparations and the referendum's legal status.

"This vote is much better than all previous ones because we have no opposition here; nobody is making a big fuss about what is going on," said Nikitenko, a middle-aged social worker who was appointed due to what she called her "vast elections experience."

"Today there are no political parties; there is only a unified Crimean nation," she said

Nikitenko's election precinct was inside a local Tatar school, an imposing building built in 2004. Surrounded by hundreds of self-built small homes that were constructed by Tatars, Greeks, Armenians, Ukrainians and many others, the school looked like a castle.

In front of a polling station on the other side of , a group of local Tatars were standing together, chewing sunflower seeds and looking gloomily at the station's entrance.

"Ninety-nine percent of Tatars did not vote, we are sure," said Aide Abdulayev, 52.

"We have boycotted this illegitimate event organized by a self-proclaimed government," he said, repeatedly urging a Moscow Times reporter "to tell the truth to the Russian people."

The Tatars said they were observing who was coming to vote, and as of midday on Sunday, they had spotted only one Tatar family. 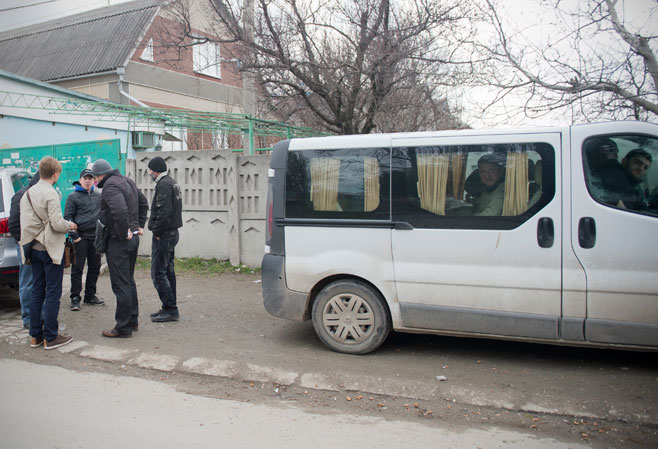 Ivan interviewing Tatars who are observing who comes to vote in front of a polling station.

"They are working on Putin's money," said Artur Sotskiy, 32, a Tatar entrepreneur.

"Even if we wake up in a different country tomorrow, we will still be Ukrainians and we will only obey Ukrainian laws," he said.

No polling stations visited by The Moscow Times gave any indication that the referendum was still taking place on Ukrainian territory. The only reminder of that fact was on the signs hanging in schools that used Ukrainian rather than Russian to praise student athletes.

"I represent an Armenian who is married to a Russian; my children work in Crimea. Nobody is forcing us to vote and as you can see, there are no guns here," said Larisa Avetisyan, 39, an Armenian and a native of Crimea.

"I signed the voters' list and saw that at least half of people have voted, with many of the names not being Russian," she said while standing in front of the polling station.

In central Simferopol, Russian soldiers were seen walking casually around armored personnel carriers and posing for pictures with children.

"We have come here from all over Russia, first by plane then by ferry," said 24-year-old Alexander, a heavily armed soldier. 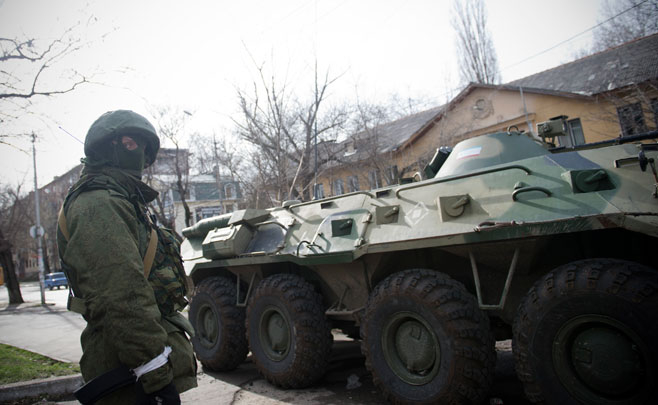 Russian soldier Alexander, 25, in front a Ukrainian base in central Simferopol.

Alexander had white ribbons wrapped around his hands — an order from his commanders. There were reports on Sunday that the ribbons were meant to designate real Russian soldiers from fake ones, who could be subject to provocations.

Alexander said he was not sure whether Russian troops would be sent to other areas of Ukraine, as many people were speculating on Sunday.

At the same time, the Ukrainian government in Kiev prohibited Ukrainian soldiers from voting at the referendum.

"This is a real problem for the referendum, since many Crimean voters who are serving in the Ukrainian army will be excluded," Mateusz Piskorski, one of 135 observers that came to monitor the voting, said during a news conference Saturday.

Joining Russia was mostly seen as fait accompli in Simferopol's cafes, buses and squares, and many people seemed to be in a state of euphoria on referendum day.

"Are you from Moscow?" a taxi driver asked.

"We will be under Moscow soon too!" he said, adding "and you will pay for it!"

Elections officials in Moscow said Tuesday that eligible voters in Russia had overwhelmingly cast their ballots in favor of the Kremlin annexing four Moscow-controlled...
no refresher