It has started as a pop-up restaurant in what used be a factory building on Serebryanicheskaya Naberezhnaya, and the renovation will continue until 510 hectares of central Moscow become modernized: Artkvartal is a 10-year, $10 billion project with investors in place and support from Moscow Mayor Sergei Sobyanin that aims to remake a currently empty and post-industrial section of northeast central Moscow centered around Baumanskaya metro station.

While the project will incorporate extant cultural venues like the Winzavod and Artplay cultural clusters, developers plan to add new zones as well. The first wave of investment has taken a high-end turn with the hiring of Michelin-starred chefs and top London bartenders to create a pop-up bar and restaurant, Door 19, an Andrei Grinev-funded and sponsor-driven venture, in the loft of the first new building of the project: "ArtHouse."

By definition, the Door 19 pop-up venue will wrap up the culinary campaign at the end of March, whereupon the first paying residents of the ArtKvartal project will move into the loft of ArtHouse, which is the first building in the first construction phase of the ArtKvartal city rejuvenation project. By September, a permanent bar will probably be established on the ground floor of ArtHouse.

Meanwhile, massive structural overhauling will continue throughout the year simultaneously in two clusters of the 11 sector blueprint for the territory. The concept behind the new clusters is to breathe new life into the currently post-industrial badlands 1.5 kilometers east of the Kremlin. This prime real estate extends from the embankment of the Yauza Moscow River tributary, moving north and eastward up to the project limits which are Novo-Ryazanskaya Ulitsa, Olkhovskaya, Baumanskaya, Vorontsovo Pole, as well as Yauzsky Bulvar, and a connecting point at the Kurskaya rail nexus.

At present, about 20 percent of the territory is occupied by industrial zones, which in the immediate future and for the next decade will be reconstructed and retired from their role in the city as heavy-industrial entities, and converted into what is hoped to be a cultural hub for the city. "Moscow still lacks a center of gravity, which in New York became Williamsburg, and in Berlin, Mitte," so says the designer of the project, Andrei Grinev, founder of the Union of Creative Territories and owner of Citymakers, the company which is developing the project.

Grinev and his colleagues have grand plans. Pyotr Kudryatsev, CEO of Citymakers, reports, "the project is big because Moscow is interested in scale. City government understands that only complex redevelopment and reorganization can solve real urban problems. The impact will be different, but it will be mostly reconstruction and restoration … We want to leave the majority of good-looking industrial buildings for creative clusters and, after restoration, to use historic monuments for social functions." 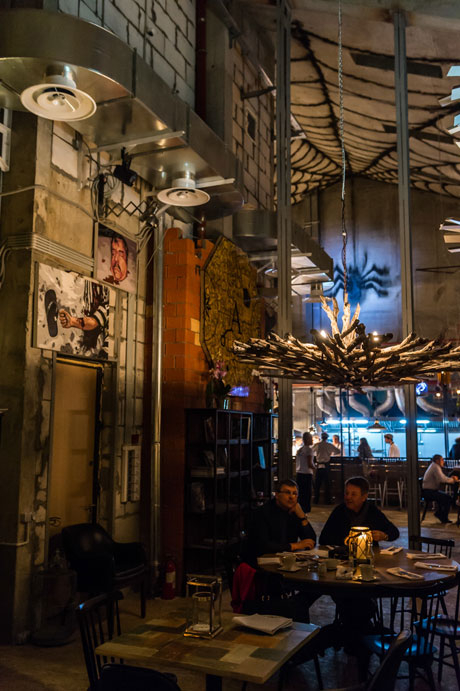 Art and community aesthetics are the overarching theme here. The blueprints have been drawn so that room is made for bicycle paths, walkways and green open spaces. Moscow at present might be a great number of great things, but it certainly is not bicycle-friendly, despite Bank of Moscow's recent ambitious foray into sponsored bicycle facilities.

Asked on what influences the ArtKvartal plans draw from, Kudryastev notes, "Berlin and New York. Both have amazing creative energy — I always recharge there. Berlin is interesting, because there was a federal government program to make it a cultural capital after unification of Germany. And it really worked — thousands of young talents and brains are coming here to study and work. New York was always one of creative capitals of the world and the latest story of reorganization of the Meatpacking District proves it."

Speaking of meat, and dining in general, ArtKvartal pulls no punches in launching the project publicly with the above-mentioned flagship bar-restaurant Door 19. You can get your first taste of the standard that the organizers hope this sector of the city will eventually uphold by first dining or partying in the loft of Door 19, Serebryanicheskaya Naberezhnaya. Natalya Palacios, director of the Moscow 'Omnivore' festival, has flown in a team of Michelin-starred chefs — Italian Gaetano Simonato, Belgian Clement Petitjean and Spaniard Paco Morales among others. The star-bearers rotate in pairs and cook meals that stick to a 2,500 and 4,000 ruble limit. Which is fine value, evidencing one positive of being bankrolled by a project with a budget of $10 billion.

The building itself leverages the quirks of a renovated industrial space. This restaurant-cum-bar in the loft of ArtHouse takes advantage of the 12-meter slanted ceilings by having turned it into a workspace for a mural commissioned to well-known graffiti artist Zhenya Ossik, who goes by the moniker 0331Crjv. Studio PH.D are involved, with art director Lana Grinyova, and Door 19 even has an art curator, Kitty Obolenskaya, who has assembled a group of young progressive artists.

But when the pop-up poshathon that is Door 19 wraps up at the end of March, will ArtKvartal progress for nine more years as a project that attracts the next generation of affluent and cultured Russians to live and spend time in the northeastern wedge of Moscow city center? Like all things, only time will tell.