The U.S. and European Union moved closer to imposing sanctions on Russia on Wednesday, as a discrepancy in a U.S. interpretation of President Vladimir Putin's rhetoric about the Ukrainian crisis opened itself up to Russian attacks.

The U.S. House of Representatives overwhelmingly passed a nonbinding resolution on Tuesday that condemned the presence of Russian troops in Ukraine and called for sanctions on Russia, including its exclusion from the Group of Eight.

The resolution, echoing last week's bill supporting $1 billion in loan guarantees to Ukraine, urged the administration of President Barack Obama to work with “European allies and other countries to impose visa, financial, trade and other sanctions on senior Russian Federation officials, majority state-owned banks and commercial organizations, and other state agencies, as appropriate.”

Interim Ukrainian Prime Minister Arseny Yatsenyuk was to meet with Obama and the U.S. Senate Foreign Relations Committee later Wednesday, an exchange that reinforces the West's allegiance to the new Ukrainian government.

But with the U.S. set to impose sanctions on Russia as early as next week, a U.S. State Department exposé titled “President Putin's Fiction: 10 False Claims About Ukraine” contains a discrepancy that could be used by Russian authorities to berate the U.S. on its approach to the conflict.

The State Department's breakdown of Putin's “false claims” on Ukraine says the terms of the Feb. 21 agreement gave Ukrainian leader Viktor Yanukovych “24 hours” to sign a bill to return Ukraine to its 2004 Constitution. But the actual agreement gave Yanukovych 48 hours.

“Yanukovych refused to keep his end of the bargain,” the State Department says in the statement published on its website on March 5.

But the Ukrainian parliament, which voted to oust Yanukovych on Feb. 22 — only 24 hours later — did not give him the full 48 hours to fulfill this term of the agreement.

This discrepancy in the State Department's analysis could give credence to Russia's insistence that the opposition failed to implement the Feb. 21 agreement with Yanukovych, further bolstering its claim that Yanukovych's ouster and the current government in Kiev are illegitimate.

A source close to the State Department told The Moscow Times that this discrepancy would be addressed at a departmental meeting on Wednesday.

State Department officials could not be reached for immediate comment.

The EU has also agreed on the wording for sanctions against those “responsible for actions which undermine or threaten the territorial integrity, sovereignty and independence of Ukraine.” The document, which is expected to be signed at a EU foreign ministers meeting next Monday in Brussels, would be the first time the EU has imposed sanctions on Russia since the end of the Cold War.

The EU earlier suspended visa liberalization and trade talks in a first round of sanctions, and the second round is expected to be more severe and include travel bans and asset freezes. 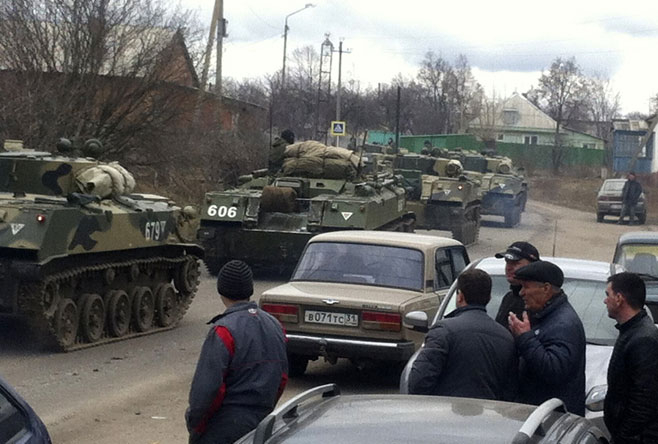 “Sanctions are ordered by international bodies and linked to some terrible events,” Zhirinovsky told reporters on Wednesday, according to Interfax. “Only barbarians can try to speak of sanctions when the protection of a population is at stake. This is the U.S. position that everyone is willing to support just to spite Russia.”

Zhirinovsky said Russia should in turn demand that the U.S. be excluded from the G8 “for attacking Kosovo, Iraq and Libya” and that Obama should be impeached for “financing extremist groups in Ukraine.”

As sanctions against Russia began to materialize, Crimean and Russian authorities have intensified preparations for a Sunday referendum on the annexation of Crimea to Russia, a political exercise that Western governments deem illegitimate.

The chairman of the Crimean parliament, Vladimir Konstantinov, predicted on Wednesday that 85 percent of Crimeans would vote in favor of joining Russia.

Crimean authorities have also imposed travel restrictions on the Simferopol airport, making it accessible only to flights arriving from Moscow in an effort to prevent “agitators” from entering the peninsula. The deputy prime minister of Crimea, Rustam Temirgaliev, said that the restrictions would be lifted on Monday after the result of the referendum was known.

The approaching referendum has also sparked discussion about the status of the peninsula's military equipment and industries.

Crimean Prime Minister Sergei Aksenov announced on Wednesday that the Ukrainian sea fleet based in Crimea would be seized.

“We do not plan on releasing their [Ukraine's] ships,” Aksenov said, Interfax reported. “We are not only holding onto the Ukrainian fleet, but we have also barred ships from Chernomorneftegaz from leaving.” Chernomorneftegaz is a state-owned oil and gas company.

Aksenov also said that authority over Ukrainian solar plants in Crimea would be transferred to the republic.

Preparations for Crimea to become Russia's 84th federal subject are also underway in the Russian capital.

The Federation Council announced that it would send 12 senators to observe the Crimean referendum and the speaker of the State Duma, Sergei Naryshkin, offered guarantees that the rights of Crimean Tatars would be respected if Crimea joined Russia.

More than 150 Russian cultural figures signed a letter of support to Putin for his actions in the crises in Ukraine and Crimea, including well-known Soviet actors Oleg Tabakov and Alexei Batalov, and pianist Denis Matsuyev.

“Our common history and common roots, our cultural and spiritual origins, our fundamental values and language have united us forever. We want the collectivity of our peoples and cultures to have a strong future. This is why we strongly support the position of the Russian president on Ukraine and Crimea,” the letter read.

Putin recorded a 67 percent approval rating in February, his highest in the last three years, according to a poll conducted by the Moscow-based Levada Center, an independent research organization.