Throughout its history, opera has taken audiences to many exotic locales, from ancient Egypt and Babylon to the Valhalla of Teutonic mythology. The new Lithuanian work "Have a Good Day!," which played to a sold-out crowd at Moscow's Meyerhold Center on Saturday, takes place entirely within a supermarket.

Produced under the moniker Operomanija, "Have a Good Day!," an opera "for 10 singing cashiers, supermarket sounds, and piano," was in fact born of a collaboration between composer Lina Lapelyte and librettist Vaiva Grainyte, who met as youths in the Lithuanian city of Kaunas, where, according to Grainyte, "all the cool kids knew each other." In turn, they recruited producer Ana Ablamanova and director Rugile Barzdziukaite, who gave the piece a minimal, immersive staging.

Upon entering, the audience takes their seats under brightly familiar beams of florescent light. Before them, 10 women dressed in identical aprons scan bar codes, seated on small, individual stages that gently emphasize their paradoxical isolation. The bleep-bloops of their scanners work as an unconventional, though fitting, overture.

"Usually in the supermarket, you see these cashiers as robots," explains Grainyte, "we wanted to give a voice to these robots, who are, after all, human beings." Her libretto weaves different types of speech into a polyphonic tapestry. At times, cashiers perkily sing the common refrains one hears in everyday shops — "Hello, how are you? Thank you! Have a good day!" — and exhaustively catalogue their goods. At others, Grainyte explores the surreal side of retail life — "Yogurts suffer insomnia, while the produce section is in eternal quarrel" — as well as the psychological experience of relentless routine, including an in-depth exegesis of early morning commutes.

The opera's main focus, however, remains firmly on the lives of the individual characters, who are permitted to tell their own stories. One woman, an immigrant, pines for home, while another longs for a son who has moved away. Over the course of the performance, the row of standardized women mutates into something messier and more relatable, a sort of snapshot of human variety and desire. 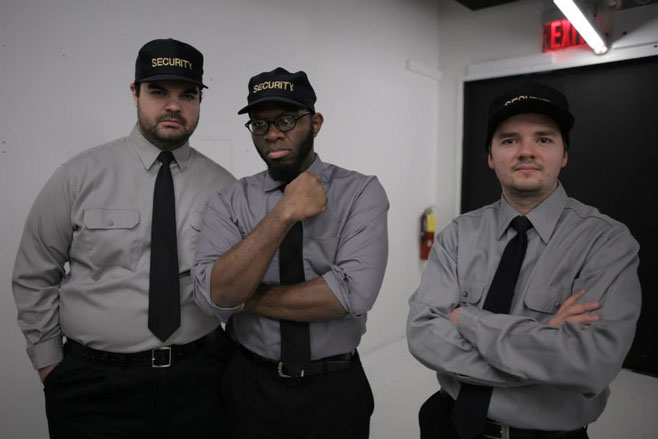 Costumed security guards have been used in some versions of the opera.

Lapelyte's score, for its part, also alternates fluidly between different tones and registers. The clerks' daily routine is conveyed through a buoyant minimalist theme whose repetitive energy matches the rhythm of the women's work. Yet Lapelyte also uses more plaintive passages to depict the workers' more subjective reveries, cutting the upbeat tone with a sense of poignancy and melancholy.

The music is warm and melodic throughout, with Lapelyte making excellent use of the all-female choir. "The point of the music is to amplify these voices, and to get the audience to believe them," said Lapelyte. Accordingly, some of the text and music was rewritten during casting to suit the individual performers, a motley crew featuring classical and jazz singers, as well as one Soviet pop singer of yesteryear.

To a certain extent, the opera is rooted in modern Lithuanian history. According to Lapelyte, Lithuania almost let its smaller, more intimate shops fall completely by the wayside in the rush to embrace capitalism, an unnerving trend that served as one of the inspirations for the work. Nonetheless, its content is universal to any place where supermarkets exist. One passage, a forlorn dirge about grad school applications, is a harrowing portrait of millennial despondency that could draw sighs of recognition from Vilnius and Moscow to Austin, Texas.

Still, Grainyte and Lapelyte are not out to proselytize about the vicissitudes of modern capitalism. Their characters struggles are universally more quotidian than melodramatic, and are treated with wit in place of tragic bombast. As Lapelyte observes, "the mood is inevitably lifted by the fact that they tell their stories while singing together."

However, Grainyte and Lapelyte do not shy away from the dark side of the environment. The women's stories are filled with longing, lost hope, and the frustrated desire to be somewhere else. The one cheerful character, a proud optimist who communicates exclusively through cliches, is the exception that proves the rule. The creators, though, let the audience piece together these patterns for themselves and react accordingly.

By the end, the supermarket slips briefly into the fantastic as Lapelyte's music and Barzdziukaite's otherwise restrained direction go slightly wild. It is over in a quick hour, but feels perhaps somehow unfinished. After all, it is a story that could go on forever.