Leo Tolstoy wrote famously about his experiences in the Crimean War in the mid-1850s. His book, "The Sevastopol Stories," has been a source of great cultural pride for some Russians over the last century and a half.

For the record, Russia lost that war, a crushing failure for Tsar Nicholas I, and a thorn forever in the side of his successor Alexander II.

The specter of a new war in Crimea has shaken the greater Russian arts community to its core. It has brought about humor, pathos, anger and despair from artists who, similar to Tolstoy, find themselves in a position of having to make sense of a conflict run rampant.

But if Tolstoy, like his contemporaries, published his tales in periodicals that reached readers relatively quickly, the modern artist naturally takes to Facebook or another Internet source. Below you will find a collection of responses to the events of the last several days, as expressed by various artists who have ties to Russian theater.

Mikhail Ugarov, a founder of Moscow's feisty Teatr.doc, responded to the news that playwright Mikhail Durnenkov and director Yury Muravitsky were among the 360 people arrested Sunday at an anti-war protest, posted this text: "Soon there will not be a single person at Teatr.doc who has not been tried in court …"

Durnenkov himself wrote the following after his release from custody several hours after his arrest: "I am fine and I am going home now. I will have something to tell [my son] Matvei someday. I was thinking — I am an artist and, in principle, I should sing. But history and the times have prepared for me the role of a crow. All I can do is squawk. There is no other art right now but squawking. And in some sense, in the sense of unborn flourishing gardens that we could be cultivating, this is very sad."

At the request of Muravitsky and many other friends, Durnenkov posted a video on YouTube Monday morning depicting how the packed paddy wagon he was held in began a sing-along of "Man and Cat," a song by the group Nol (Zero). For the record, the words of the first verse are:

"A man and a cat cry beside the window./ The gray rain drips right down the glass./ An ambulance drives up to the man and cat –/ The poor man's brains have snapped."

"Today on Forgiveness Sunday," Grebenshchikov wrote, "I want to say a simple thing; may my words be heard."

"To those who hold power in their hands today: Remember the people who delegated that power to you. Without those people you are nothing. Stop deceiving them."

"No matter how much you want to go down in history, do not try doing that in exchange for the blood of people who trust you.

There are no problems that cannot be solved by peaceful means. There are always decisions that allow us to avoid people dying." 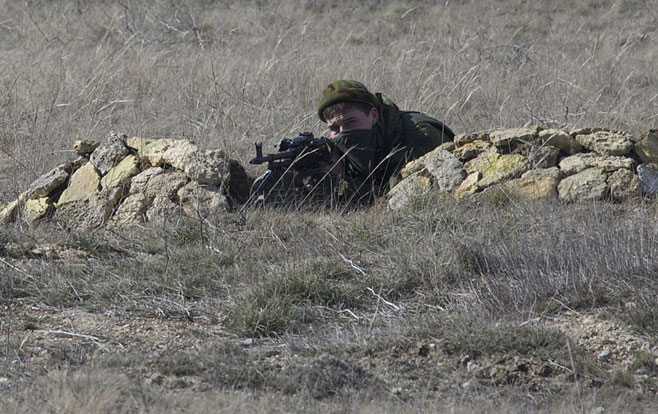 Russian soldiers have dug in around Ukrainian bases and are effectively preventing the Ukrainians from leaving.

"Take the long view: Stop pushing people into conflict with other people, stop lying to your people for the sake of gaining dubious advantage today — tomorrow it will lead to incomparably large losses."

"Lord, give us the wisdom to resolve disputes by peaceful means!"

From his vantage point in Minsk, Belarus, playwright Andrei Kureichik wrote: "Of course I am amazed and thrilled by the steel will and the irreproachable actions of the Ukrainian authorities and military. They did not respond to a single one of Putin's provocations. There has not been a single person wounded or dead. Not one clash. The result is the total failure of Russia to justify their aggression diplomatically. Putin simply cannot formulate why he sent forces into the territory of a sovereign state, if not one Russian or "countryman" has suffered. Not even one. His hope did not pan out that the Ukrainians would be tempted to shoot and that there would be Russian victims that could then be presented to the world to justify a "victorious blitzkrieg of vengeance and defense." There is no one to avenge. The threat has not been made. How do you explain the occupation in such a situation? You can't. It is impossible. In the eyes of the world Putin is simply an evil aggressor with no motivation. And it is obvious that this will have serious repercussions for him."

Olga Darfy is a playwright and director who has worked at Teatr.doc and the Playwright and Director Center. Here is what she wrote:

"I am a citizen of the Russian Federation and I currently live in Crimea. It so happens that I am an occupier. But I have the distinct impression that aggressors have occupied this land. It has begun. In the skies are the sounds of fighter planes. Such silly nonsense, it is impossible to work."

"Yes, of course the Yankees will arm the Ukrainians, yes, and in Russia all monies will now be wasted on war instead of social programs. We will kill each other awhile. And what will come of it? Putin is a thug for hire. No to war! And no to war on Facebook!"

Natalya Vorozhbyt is a Ukrainian-born, Russian-language playwright who lives in Kiev. She recently blogged for The Guardian about a docudrama she is working on about the Maidan events. On Facebook on Sunday, she was more direct in comments she made directly to her Russian friends:

"How we all have been squeezed … for the last five years or so! You and us, too. There was a time when I lived in a different Moscow. And I lived in a different Ukraine. I could breathe and not fear. I do not want to live with memories of freedom. I don't want to and I will not. When injustice is so huge, how can we not be victorious? It is now so big that even a blind person could spit at it and hit the mark." 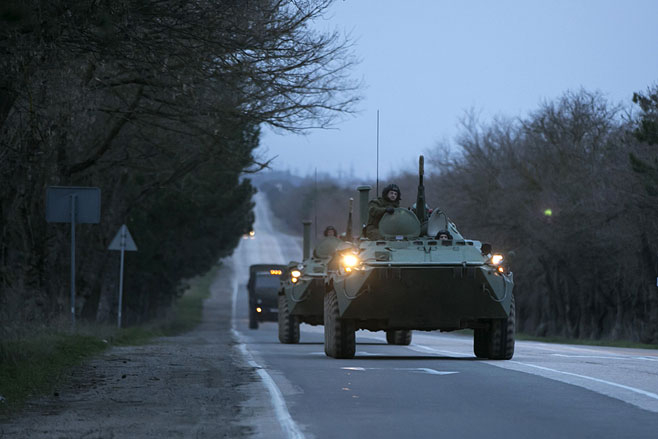 Viktor Shenderovich is a brilliant writer of humorous texts. He writes plays, is a frequent political commentator, and was one of the primary authors of the famous "Puppets" political satire show on the old NTV station, which Putin personally shut down shortly after become president in 2000. He commented on the current events in an interview on Cenzor.net.

"Of course, we are talking here about revenge for Maidan," Shenderovich said, "but primarily it is the reflex of a hyena. Ukraine, largely thanks precisely to Putin's aggressive policies, found itself defenseless in a matter of moments, torn into political shards, and lacking in legitimate power. It is the perfect time to attack! He will bite off as much as he can and then, of course, will retreat a little. The impotence of the West will allow him to be bold for the time being."

"Naturally he wants to go down in history as the 'alpha-male,' the author of the partitioning, and he wants it to be as triumphant as possible. But he seriously lacks an adequate grip on things. One gets the sense that the Olympics, victoriously shaken from his shoulders, have completely fogged his mind. Today he holds God by the beard and thrills in it. Alas, he is incapable of making sense of historical parallels, beginning with that same Crimean War. He was taught the wrong lessons."

Finally, I offer a text from Maxim Kurochkin, a Ukrainian-born, Russian-language playwright. His most famous play, "Kitchen," was an epic, time-warped work in which a group of contemporary Russians did not realize that they were also Nibelungs, and thus were unable to fight back an invading army of barbarian Huns. You may find that information useful when you read his final sentence.

Kurochkin is notoriously skeptical of the value of Facebook, but the current situation forced even him to step out from behind the shroud of anonymity in order to have his say. He posted this comment on Saturday.

"I am Ukrainian. I live in Moscow. Why? For the theater in which I believe? Well, roughly, yes. But Putin has already taken notice of theater. So soon there will be no honest theater. Lately I have not been ashamed of my Ukraine. It is no longer controlled by a thief and murderer. Russia is, however. I am not sorry for myself, or my failed concept of career and happiness. I am sorry for my Russian friends. They have to live with this. I loved Russia as best I could. And I still do not believe that Russians gave Putin a mandate for aggression against the people of Ukraine. There is always the possibility of a "recall." That is what reasonable power exists for, so as not to encourage the worst in people. Putin is pathetic, his regime is not viable in the long term. He wasn't even able to organize a decent provocation. He just dumbly attacked. Putin is an amazing misfortune, a mystical punishment for Russians. Have they suffered so little? Why can't you just live? What are you lacking? Land? Brains? You have everything! But Putin did not have a happy childhood. And now everyone must pay for that. And that's just the beginning. It is shameful. Depressing. When Putin came to power, I wrote my play "Kitchen." In it I tried — on my amateurish level — to talk about fascism. I predicted the coming to power of "emergency people," Huns, ruins and other murky troubles. This part of the play did not concern the audience. Who believed in fascism in 2001? Now here it is! Right here in Moscow. There is no fascism in Kiev. My mother is Russian. She is not a fascist. My friends and family are not fascists. The people who were murdered on Maidan were not fascists. You lie, Putin! You constantly lie! I am making an attempt to understand this. This is a lesson for me. If you believe something — say it straight. Putin is a warmonger. What's your problem, Nibelungs?"