The Russian holiday of Maslenitsa traditionally involves the burning of a large effigy, and perhaps one of the most dramatic burnings this year took place Saturday at the Nikola-Lenivets park in Kaluga region, where Burning Man Russia worked with Nikola-Lenivets' management to organize the burning of a series of sculptural objects.

For Burning Man Russia, this event was the first of  in the future as the organization, created last year by fans of the yearly "Burning Man" festival held in Nevada's Black Rock Desert, seeks to raise awareness of their philosophy and community in Russia. For Nikola-Lenivets, the event allowed them to show off their new winter infrastructure and preview the upcoming season of festivals.

This was the first product of a new relationship between Burning Man Russia and Nikola-Lenivets, an architectural park in the Kaluga region first founded as a platform for the yearly "Archstoyanie" festival, started in 2006 by architect Nikolai Polissky. Since its creation, Nikola-Lenivets has grown into a year-round space that includes platforms for events, a farm, a hostel and guesthouses.

"We want to connect with the community of Burners in Russia and give them the chance to create their projects here," said Ulyana Goncharova, project manager at Archpolis, Nikola-Lenivets' managing company. "We have the workshops, the spaces, the architects," Goncharova said, adding that Burning Man Russia was "very much in the same spirit" as the mission of Nikola-Lenivets.

Burning Man Russia, a Russian community of fans of the yearly Burning Man festival held in Nevada's Black Rock Desert, teamed up with the Nikola-Lenivets architectural park to organize the burning of several sculptural effigies to celebrate the traditional Russian holiday of Maslenitsa.

Since their inception, Burning Man Russia has held monthly events in Moscow aimed at spreading the word about their community. At the event Saturday, Burning Man Russia organizer Katya Vinnikova held a lecture for newcomers explaining the ideals of Burning Man as well as giving practical advice about how to get to Nevada and what to bring.

"We try to attract anyone who has an interest in the creative construction of objects and we give them a platform to realize their possibilities," Vinnikova said. She added that while only a  hundred Russians had actually been to Burning Man, more than a thousand people had attended Burning Man Russia events since they started hosting monthly Burner's Bar events last year, and the community is growing quickly.

Last year, Russian art collective "Cradle of Mir" won a grant to create an installation at Burning Man, the first time that a Russian group had created such a large piece at the festival. This year, Cradle of Mir hopes to win another grant, and as many as six camps of Russians are planning to travel to the festival.

The Maslenitsa celebration acted as something of a warm-up for the main festival, with Burning Man Russia holding a contest to design effigies for the burning and selecting five winning designs, one of which was created by Cradle of Mir. The effigies were all assembled onsite on the day of the burning and were generally small in comparison to the tower created by Nikolai Polissky for the burning.

The Maslenitsa celebration gave Nikola-Lenivets a chance to demonstrate its improved winter facilities and also to let people know about the upcoming summer season. Traditionally active only in summer, it has, in the last few years, remained open year-round.

On Saturday, patrons flocked to the heated Ugra Cafe to warm up with GlЯhwein and tea, while enjoying blini with an array of toppings offered outside. Children enjoyed the small skating rink, and after the burning ended some guests chose to avoid the long commute home by staying at one of Nikola-Lenivets' guesthouses or checking into the hostel. 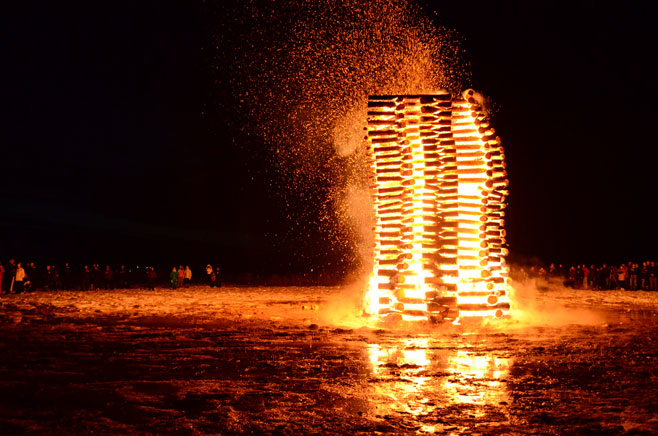 Crowds hung back as an immense wooden tower was engulfed by flames.

Ulyana Goncharova said that while several hundred guests had come for Maslenitsa, they expect much larger crowds once the festival season begins — as many as 10,000 people come to Nikola-Lenivets for the yearly Archstoyanie festival, and smaller events also bring in sizable crowds.

Archpolis has been organizing new events at Nikola-Lenivets aside from Archstoyanie since the managing company was created, and adds new events every year. This year, Goncharova said they were particularly looking forward to "Archstoyanie Children," an event that aims to recreate the wonder of childhood through landscape are and interactive objects intended for adults and children alike.

Nikola-Lenivets will also be hosting New Media Night, a celebration that will give people the opportunity "to interact with the landscape through modern technology," Goncharova said. While the schedule for the upcoming season has not yet been finalized, events should start in May, and Nikola-Lenivets awaits a new wave of visitors, Russian and foreign alike.