"This is not Earth," begins "Hard to Be a God," the posthumous new film of Russian director Alexei German. Arriving in Moscow about a year after the director's death last February, German's final statement is a bracing, often maddening experience, that, in its grand ambition and total contempt for good taste, dwarfs the bulk of contemporary cinema.

Long an unknown quantity in the West, German, sometimes spelled Guerman or Gherman to emphasize the hard "G," enjoys exalted status in Russia, where his countrymen treasure the obsessive period detail and devotion to historical inquiry that often alienate foreign viewers. Though he's been compared to the likes of Fellini, Beckett, Kafka and Chekhov, German's style remains singularly his own.

Whereas Tolstoy assumed a godlike, omniscient viewpoint to address history in "War and Peace," German takes the opposite approach, working with the limited perspective of the individual experiencing history from within. His meticulous recreation of everyday life makes his films vivid, immersive experiences, even as the whole picture lingers teasingly out of view.

In the 1984 film "My Friend Ivan Lapshin," hailed as the greatest Soviet film of all time by no less an authority than Andrei Tarkovsky, the Stalinist 1930s are cobbled together piecemeal from the childhood memories of an unseen narrator. The protagonist of German's paranoid masterpiece, "Khrustalyov, My Car!" (1998) winds his way to the dark heart of Soviet power in a twisted, linear fashion, careening from Moscow to prison to Stalin's deathbed in quick succession. Though the film remains tethered to the hero's confused vantage point, his journey allows the viewer a thorough, if ground-level, view of a social order's sudden dissolution.

A willful perfectionist, German was never going to be a prolific director, especially in the Soviet Union, where each of his films, from the 1967 work "Trial on the Road to Lapshin," was banned. Khrustalyov, his first film to enjoy a release unhindered by the authorities, was booed by an unappreciative Cannes audience. His process, which involved painstaking research in order to do right by small material details, ensured that his productions drew on and on. "Hard to Be a God," originally known as "A History of the Arkanar Massacre," was conceived in the mid-'60s, entered pre-production in 1998, and took six years to film. At the time of his death, German was working to get the final bits of the film's sound work exactly right.

Adapted from a novel by sci-fi authors Boris and Arkady Strugatsky, "Hard to Be a God" takes German's preoccupation with history to a new level, using its fantastic premise to literally dump its protagonist in the past. Don Rumata, a scientist played by Leonid Yarmolnik, arrives from Earth to the rain and fog-shrouded planet of Arkanar where everything appears to be the same, only 800 years behind. Forbidden to intervene in the planet's affairs, Rumata watches the fallout from a repressed Renaissance, in which intellectuals and artists are rounded up and treated to dismal fates, such as being drowned in human excrement. 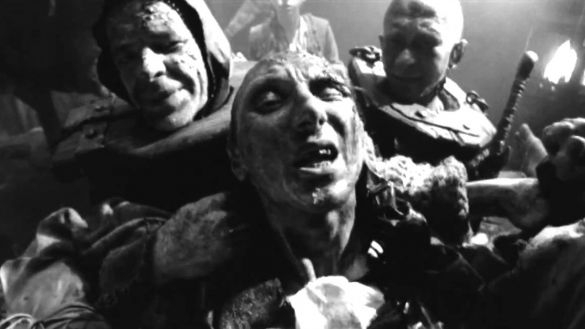 The film plunges viewers into the physicality and filth of an imagined past.

What remains of society, then, is widespread degradation and, often, pure idiocy. Rumata, in the guise of a nobleman of supposedly divine lineage, looks on as the mostly male denizens of Arkanar propel snot from their nostrils, guffaw and, occasionally, commit appalling acts of graphic violence. Their high jinks range from the grotesque to pure slapstick, including a particularly funny gag involving a chastity belt.

On a visual level, German denies the viewer a wide perspective on the proceedings, working largely with tight, claustrophobic framings that are often obscured by passersby or hanging meat, and are easily filled by the human face. In place of clear action, the viewer is confronted by raw physicality — mud, grime and bare behind. The ugliness is unapologetically grating, but German's almost casual mastery of detail, from flames reflected in the eye of a dead cow to a number of certainly tricky maneuvers involving birds in flight, remains breathtaking. The film's heavy, waterlogged atmosphere recalls Alexander Sokurov's 2011 film "Faust," with which it shares the influence of Northern Renaissance painters such as Brueghel and Bosch, a preoccupation with putrefaction, and an utter apathy towards conventional narrative expectations.

The Strugatskys' story is rife with allegories, from Stalin's persecution of intellectuals to examples of contemporary thuggery the world over, but German is less interested in abstraction than incident. The plot does not develop so much as accumulate, as the intensifying depravities wear on Rumata's psyche. Both Rumata and the natives often look directly into the camera, coquettishly acknowledging and occasionally mocking its role in recording their history. Ultimately, the camera's role is not far from that of Rumata, who continually wavers in his commitment to the premises of his useless experiment. However, his attempts at both aloof observation and active participation are equally doomed.

"Hard to Be a God" is unambiguously not for everyone, as the unusually high number of walk-outs can attest. However, those with the endurance to, well, stomach it will find a bold examination of human nature and our invaluable, limited ability to observe it. A movie set in a past embedded in the future, it is a fitting final act for a man born into a society attempting to jumpstart the future, and who lived to see this experiment tossed into the dustbin of history as some indefinable process began anew. With his passing, we have lost one of our finest investigators of this process.

"Hard to Be a God" is playing at the Center of Documentary Film through February 26.

Retrospectives of German's work are underway at the Center of Documentary Film and Kino 35mm.