That is what real estate developers are counting on after the Games.

"It is a totally different city now," said Yevgeniya Starkova, a spokeswoman for MR Group, which has put up three apartment buildings in the subtropical seaside resort.

If a bright sky and warm air in mid-February is not enough, Sochi now has more to offer, after the government poured more than $50 billion into the area in preparation for the Winter Olympics, which drew to a close Sunday. Sochi boasts brand-new commuter trains, newly paved sidewalks, a host of new roads, and sewage treatment facilities to keep the sea enjoyable, to name just a few of the recently arrived amenities.

As the glow and attention of the Olympic Games begins to fade, will the revamped Black Sea resort be able to find buyers for its apartments?

Far-sighted real estate companies knew this was coming the very day when the International Olympic Committee announced Sochi as the host of the Games on July 5, 2007.

Since then, prices edged down a bit only when the economic crisis hammered both Russia and the world in 2008 and 2009, he said. Apartments now sell at prices that make a studio apartment worth at least $68,000, similar to the cost of real estate in the Moscow region, which is second only in price to the capital itself.

Sochi's fame reached its peak during the Soviet era, when the Iron Curtain reduced the choice of seaside resorts for the majority of Soviet citizens to beaches on the country's Black Sea coast. The city earned the nickname of a "resort capital" and became a standard of high living, as testified by one formerly popular saying — "If I always made the right bets, I would live in Sochi."

But it fell into disrepair with the fall of the Soviet Union, and even President Vladimir Putin's frequent stays at his villa outside the city have not returned the area its former luster. However, the international spotlight on the Olympics — although often negative, focusing on corruption, shoddy construction work and attacks on local whistleblowers — and the completion of the huge beautification effort in the run-up to the Games may draw some additional customer attention to Sochi real estate further down the line.

President Putin is not the only high-profile, well-off Russian trying to  a trend by occupying property in Sochi. Businessman and former president of the republic of Karachayevo-Cherkessia,  Arsen Kanokov, recently showed off a home that he built for himself on the seaside in Sochi.

And to a certain extent, it is working. MR Group sold all 220 apartments in its luxury Royal Park estate in Sochi from 2009 through 2013, Starkova said.

But all in all, high prices have turned away a lot of potential Sochi home owners, Volodko said. A mere 700 new apartments change hands every year now, he said. 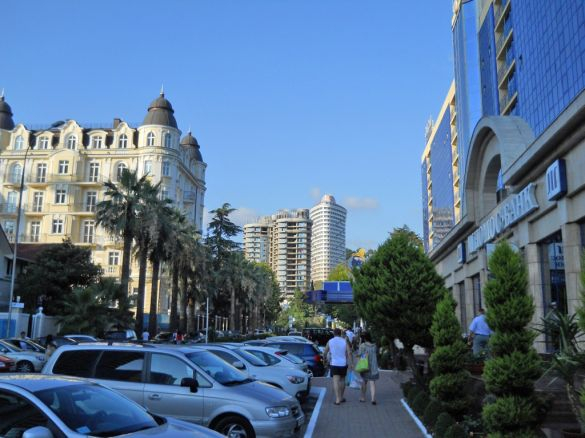 Now that the Games have ended, real estate companies are likely to keep their offers as they are for at least a half year to test the market, Volodko said. If demand remains sluggish, prices might slide, he said.

The government enforced a moratorium on all residential construction in 2013 to limit the number of building sites in Sochi during the Games, but work on the city's many new apartment buildings will resume soon, creating downward pressure on prices, he said.

Starkova said she was sure the value of new apartments would hold in the foreseeable future because they come with the perks of living in a nicer, reborn resort.

But even with the premium facelift and the Olympic glow, Sochi is still at risk of losing out to foreign destinations like Bulgaria on the market for seaside homes.

The key reason is cost: Prices in Sochi start at 60,000 rubles ($1,700) per square meter, Starkova said, while on Bulgaria's Black Sea coast they start at half that, according to Yulia Saifetdinova, director of St. Peterburg real estate broker Sweet Home.

Also, the quality is better for the money in Bulgaria, and interest-free mortgage loans are available for as long as three years, Saifetdinova said.

"The middle class will stick with Bulgaria," she said, while higher-income individuals tend to opt for Spain or Italy when shopping for a home by the beach.

In additions, many customers are anxious about Russia's economic and political future, Saifetdinova said.

In Bulgaria, many older locals speak Russian, because they studied it at school in Soviet times, she said. The country also offers retirement-age people a simplified application process for a residence permit, she said.

Milen Yankov, director of Bulgarian real estate company Bulgarstroi, said through his representative that Bulgaria also offers a drier and cooler climate in summertime than Sochi, a lower cost of living and inflation rate. In addition, as member of the European Union, the country seeks to assure more predictable legislative and economic environment.