A Moscow court on Monday issued seven prison terms and one suspended sentence in the high-profile Bolotnoye case over alleged anti-Kremlin riots in May 2012, triggering protests by and detentions of supporters who say the case is politically motivated.

While the sentences were being read out in the courtroom, helmeted riot police detained about 200 people who were rallying to show support for the defendants outside the court. The defendants' supporters say the eight people in detention are political prisoners, victims of a prosecution determined to suppress dissent.

Protests over Monday's ruling continued into the evening, with more detentions of demonstrators on Manezh Square and an increased security presence in the area.

Amnesty International reacted to Monday's ruling with the same concern as protesters.

After the sentences were publicized, Amnesty International called the ruling a "mockery of justice" and demanded that the defendants be released "without any preliminary conditions," Sergei Nikitin, the head of the group's Russian branch, told Interfax.

"We are seeing a trend — pressure being placed on civil society in order to frighten and stop any attempts by the citizens to use their right for peaceful demonstrations," Nikitin said.

All eight defendants were found guilty of either throwing stones, pushing or striking police officers, or trying to take their nonlethal weapons, thus lightly wounding police.

They were also found guilty of causing material damage to property by destroying portable public toilets, asphalt and causing police to lose their radios and helmets.

"The court believes that is possible for the defendants to mend their ways only if isolated from society," judge Natalya Nikishina told the court while the defendants stood by in a cell.

The eighth defendant, who is the youngest one, Alexandra Naumova, formerly Dukhanina, 20, received a suspended sentence of three years with a similar probation period. The judge cited Naumova's age as a factor in the sentencing. 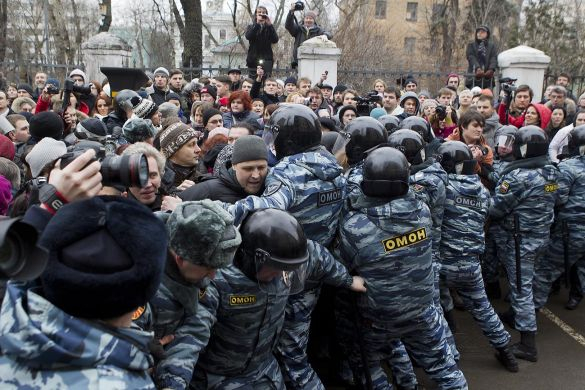 Riot police trying to hold a crowd back outside the court where the eight Bolotnoye defendants were sentenced.

Nikishina dismissed the defense's arguments of innocence, calling claims that the defendants had not engaged in violent actions "far-fetched" and saying she treated such claims "with skepticism, since they contradict the victims' testimony."

The terms for the seven male convicts will be counted from the time of their arrests, Nikishina said. This means that many of them have already served a substantial part of their terms.

For Naumova, this starts from the time of her house arrest, which has already lasted for more than a year.

Nikishina ruled to extend restrictions on freedom of movement for the eight defendants until their respective sentences take effect.

It remained unclear when they would start serving their terms, as defense lawyers said they would appeal the sentences with the Moscow City Court within 10 days, and the final sentences will be issued by the higher court.

Vyacheslav Makarov, Krivov's lawyer, told journalists outside the court that his defendant "had undeservingly received the punishment, as he was beaten by police officers at the sanctioned rally."

Makarov said he and another defense lawyer, Dmitry Agranovsky, had noticed that while reading the sentences out, the judge never cited video records of the rally, only the testimony of witnesses.

A Moscow Times reporter heard otherwise, however, with the judge citing a video demonstrated in court as proof that a defendant had used force against police while a defense witness testified to the opposite.

But Makarov told journalists that "not all arguments of defense lawyers were voiced in the final ruling."

Savyolov's lawyer, Farit Tagirov, supported Makarov, saying video records proved that his client was innocent, and that judge Nikishina had not cited any of the evidence he presented while reading her ruling.

Savyolov "stood in a crowd of citizens, was detained for it, and that was all there was to it," Tagirov told journalists.

Moreover, Tagirov said, the police officers who testified about detaining Savylolov at the rally were not the same ones who had detained him, a fact which was proven by witnesses, he said.

Nikitin of Amnesty International said those convicted were ordinary people who found themselves behind bars due to poor organization of the opposition rally by law enforcement officials and other authorities, Interfax reported.

"The case is of a purely political character. There were no riots on Bolotnaya Ploshchad," Nikitin said.

Nikitin echoed the findings of two independent probes into the alleged riots conducted by Russian and foreign human rights advocates.

Both investigations, announced last year, concluded that there were no riots on Bolotnaya Ploshchad and clashes between police and protesters were provoked by police.

Helmeted riot police detained about 200 supporters outside the court Monday while the sentences were announced, including popular opposition leader and anti-corruption blogger Alexei Navalny and two members of the opposition-minded Pussy Riot, Maria Alyokhina and Nadezhda Tolokonnikova. 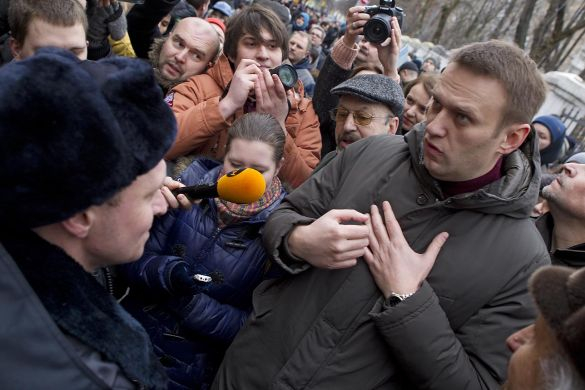 Opposition leader Alexei Navalny speaking outside the court on Monday.

The three high-profile supporters are also believed to be victims of politically motivated prosecutions: Navalny got a five-year-suspended sentence last fall on charges of embezzling timber from a state company, whil Alyokhina and Tolokonnikova were released under the Kremlin amnesty in December after serving almost two years in prison for performing an anti-Putin song at a Moscow cathedral.

While Tolokonnikova's and Alyokina's early release was widely viewed as a political thaw ahead of the Sochi Olympics, Monday's ruling in the Bolotnoye case has stirred concerns of a post-Sochi crackdown on Kremlin critics.

Authorities seemed to be anticipating protests outside the court Monday, with riot police standing by ahead of the hearing.

As a Moscow Times reporter walked to the court and through the crowd of spectators outside, riot police could be seen pulling people from the crowd, seemingly at random, with those being dragged to police vans not seen doing anything out of the ordinary before being detained.

By the time the sentencing was over, police had cleared the area adjacent to the court of all spectators, leaving only a few elderly women.

An unauthorized rally was planned on Manezh Square, beside the Kremlin walls, at 7 p.m. on Monday to protest the rulings in the Bolotnoye trial. Police publicly warned potential protesters against taking part, Interfax reported.

The authorized march and rally on the city's Bolotnaya Ploschad in 2012 attracted tens of thousands of people who protested President Vladimir Putin's rule.

More than 400 participants were detained after a stampede and ensuing scuffles with police, which authorities call riots but Russian and foreign observers blame on a lack of space for demonstrators to move around.

In connection with the rally, authorities opened a number of criminal cases against its organizers and rank-and-file protesters on charges of staging or taking part in riots and attacking police.

A total of 27 people were accused in the Bolotnoye cases. Two of them were sentenced to prison terms in the previous two years, four had charges against them dropped under a Kremlin amnesty in December, and two alleged organizers — Left Front leader Sergei Udaltsov and his aide Leonid Razvozzhayev — are still standing trial in Moscow. That trial began in February.