Most discussions about early electronic music inevitably turn to Soviet engineer Leon Theremin, the pioneer of electronic musical instruments. This is also the case in the documentary “Elektro Moskva,” a story about Russia’s history from the Soviet Union to the present day told through sound and electronic music.

Theremin, who also developed an array of surveillance equipment for the NKVD and KGB, found that many of his electronic devices were also musical. In 1928, he patented an instrument that could be played without physical contact. The device, known as the theremin, generated a magnetic field whose pitch and amplification is varied and disrupted by the movement of its performer’s hands, producing a unique, high-pitched eerie sound. It provided the soundtracks for science fiction and horror movies, and was also used in psychedelic music. Theremin also invented the Rhythmicon in 1932, the world’s first drum machine.

The shadow of Theremin, whose figure bookends Elektro Moskva with previously unseen footage of his last interview shot in late 1993 before his death in November that year, certainly looms large over the film. But its directors, Austria-based filmmaking duo Yelena Tikhonova and Dominik Spritzendorfer explain that a history of Soviet electronic music is not their aim. Indeed, there is almost no music in the film.

Spritzendorfer says Elektro Moskva took an “essayistic approach to understand how life was like in Soviet times … about subcultures and creativity that was resistant to any totalitarian system,” showing cultural and social changes the country has been through.

As the film took a more personal approach to understanding Russia’s history, the directors, both graduates of Moscow’s Gerasimov Institute of Cinematography, or VGIK, chose music and technology as the thread by which to tell this story, and got Andrei Andrianov to write and narrate the script.

The birth of electronic music was an unlikely outcome of the junk of the Soviet age of electrification. For the communists, science and technical progress were their gods. Vladimir Lenin believed that to achieve the goals of communism, a complete electrification of the country was necessary, and at the 8th All-Russia Congress of Soviets held in 1920, he presented the GOELRO plan, aiming to achieve economic recovery and development through an electrification campaign, thus sparking a period of innovation.

The electrification campaign also formed the basis for the Soviet military machine in their conquest of both earth and space. The inventors of the first Soviet analog synthesizers were mostly engineers in the defense industry — the only place where components could be found.

For example, Yevgeny Murzin secretly created the ANS synthesizer, an optical synthesizer based on photo-electronic device — the musical score is drawn directly on film and processed by the machine — between 1937 and 1957, while he was an engineer working at the Scientific Research Institute. The institute had its own production plant that allowed him to industrially manufacture the 2-ton synthesizer.

Western music was popular in Soviet times, but musical instruments were rare and expensive, especially electronic ones, so inventors and musicians used anything they could get their hands on.

This created a thriving underground scene of bedroom enthusiasts, electronic parts traders and musicians, existing in isolation behind the Iron Curtain.

Tikhonova is all too familiar with this situation. A daughter of scientists, she was raised in Obninsk, a formerly closed and secret city 100 kilometers southeast of Moscow, where physicists and engineers worked on the world’s first nuclear power plant. 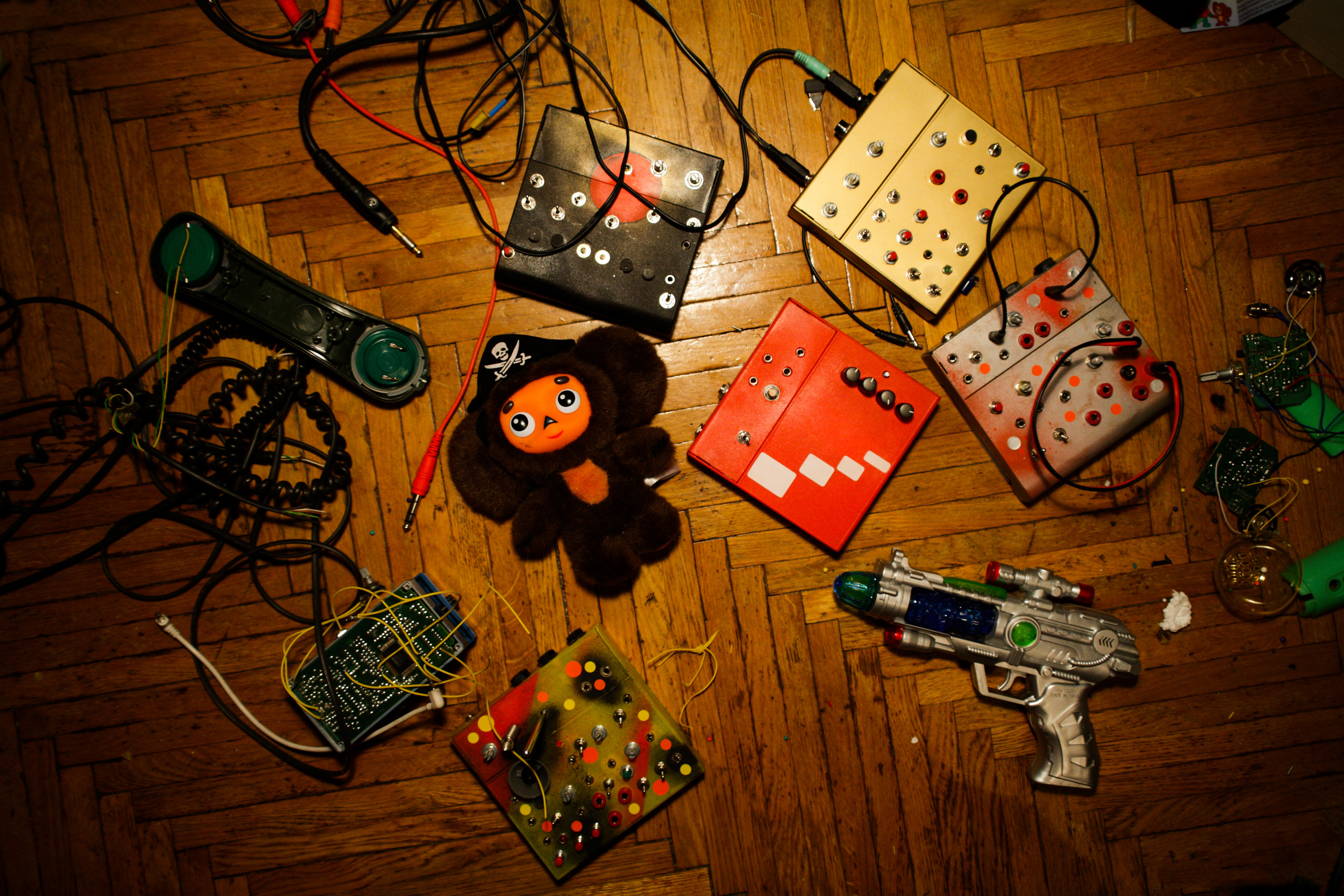 Old and new electronic parts that are used to make synthesizers and other musical instruments. (Elektro Moskva / Rotor Films)

Made with old fashioned hardware and low quality parts, Soviet synthesizers are all unique and sound different. Indeed, they were unpredictable, as Alexei Borisov, of popular ‘80s St. Petersburg band “Nochnoi Prospekt” laments: “Western instruments have quality. And ours, they vary — some work, some do not. … Most were unsuitable to play music, they just made cosmic sounds.”

Today, trade in Soviet-era synthesizers is lucrative for those with the right connections — collectors have to scour flea markets buying Soviet synths at inflated prices. But the spirit of creativity and innovation carries on, though under different circumstances — capitalism has brought an influx of cheap, Chinese-made toys onto the market. In the film we are introduced to a new generation of circuit benders, like Dima Morozov, who did not even know Soviet times.

As one collector in the film explains the continued fascination with DIY electronic instruments: "[They] are unpredictable. As is life in Moscow, in Russia."

Elektro Moskva (Russian/English, with English subtitles) is currently touring the film festival circuit and is available (only in Russia) on iTunes and Google Play.

"Leo Tolstoy" is one of six books nominated for the Pushkin House Book Prize.
weekend kitchen

Chase Away the Autumn Blues with Cured Cod

Russian supermarkets have long aisles of salted and cured fish, but home curing is easy and much tastier.
The MT List

A weekend of film, food, and theater festivals, a book fair and much more.
masterpieces on sale

On display and sale are works by Russian and foreign artists.