ROSA KHUTOR — Iouri Podladtchikov said a scolding from his dad provided the spark that led to him snatching Shaun White's halfpipe title in one of biggest upsets of the Sochi Olympics late Tuesday.

The Russian-born Swiss snowboarder has a repertoire of tricks almost on a par with the U.S. two-time Olympic champion, but has often shown an inability to pull them off on the big stage.

In the first run in qualifying at the Rosa Khutor Extreme Park, it looked like that may be the case again when he crashed and faced the ignominy of going out at the first hurdle.

"My second qualification was the hardest thing I have ever done in my life — it was the gnarliest thing," said the 25-year-old.

"My dad said: 'Russia, you, all that pressure and you are not even going to end up going to the semi-finals. You are screwing up right now.'"

The 25-year-old responded with a run good enough to reach the semi-finals, from where he qualified for the final before lighting up the night with a brilliant run to win gold.

"When I got that right it felt like anything was possible and from then on I was building another little piece every run," he said.

"My day started really, really low and ended at the highest point possible."

That high point included the perfect execution of his trademark YOLO, or "You Only Live Once," flip that White had added to his own bag of tricks to great effect.

Podladtchikov has not always had such success with his own invention, which is a double-cork 1440, or two head-over-heels flips and two 360-degree turns. The night he finally landed it at an X Games contest in France last year, he immediately botched the next trick, bumping him to fourth place. 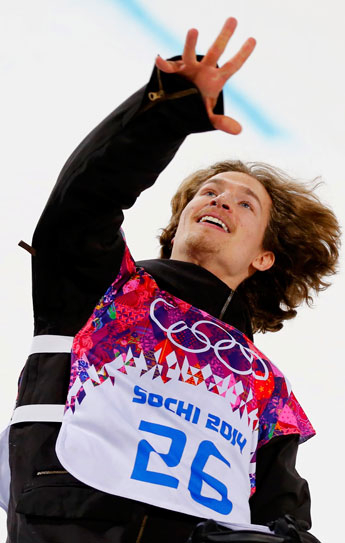 "When I saw videos of Shaun doing it really well, I was really bummed because it was my trick and he was already doing it better than me," Podladtchikov said with a smile. "You know today, I guess I was doing it better."

Podladtchikov began his final run third overall. Knowing he needed speed and space to throw the set required to reach the top of the leaderboard, he glided over the 22-foot-high wall five times rather than six, each trip more difficult than the last.

Backside air to Crippler. Double-cork 1260 to a frontside double-cork 1080. One last grab of the board produced the glory he had long wondered would ever come. He capped the run that signaled a power shift in the sport with an airtight YOLO flip.

"YOLO flip means you only live once," Podladtchikov said with a laugh. "It means you guys have to party with me now."

His relations with White were good, he thought, mainly because they recognized in each other a desire to push the boundaries of their sport.

"He said congrats, I think he was happy for me," Podladtchikov said, adding that they had agreed to celebrate together. "We want each other to win because we are trying different things."

White had little to celebrate after finishing fourth behind two Japanese teenagers but agreed that he shared an experimental spirit with the man known on the circuit as "I-Pod."

"I have known him for a couple of years now, really great guy, always smiling, always happy, and he deserves a big win like this, he has been pushing it hard," he said.

Podladtchikov was born in Moscow before leaving Russia for the Netherlands at the age of four and moving on to Switzerland when he was eight.

His cosmopolitan upbringing was much in evidence when he answered questions at his news conference in fluent Russian, English and German, only tripping up when asked to speak in Dutch.

The land of his birth, though, clearly exerts a major pull and he described winning gold in Russia as "beautiful."

"It is insane to hear Russian, I love to speak Russian, it reminds me of so many things from my childhood," he said.

‘Enemy of the people’

Prosecutors in the southern Russian city of Penza dropped all charges in what would have been the first criminal case for evading Moscow’s &ldquo...