The U.S. Department of Homeland Security has warned airlines flying into Russia during the Sochi Winter Olympics that terrorists may smuggle explosives concealed in toothpaste tubes on to planes, a congressional security committee chief has said.

The department has issued a bulletin to airlines, warning them that the explosives may be used during flights or carried on to Sochi, the head of the House Committee on Homeland Security, Republican Michael McCaul, said Wednesday, CNN reported.

The toothpaste threat is "real" and "based on a credible source," said an unidentified official, adding that the U.S. was "taking it seriously. So are other countries."

The concern over concealed explosives in toothpaste tubes is mostly focused on flights from Europe and Asia, with the majority of direct flights into Russia coming from these two areas. Delta Airlines and Russia's Aeroflot and Transaero carriers operate some nonstop flights from the U.S., but those flights are much fewer in number. 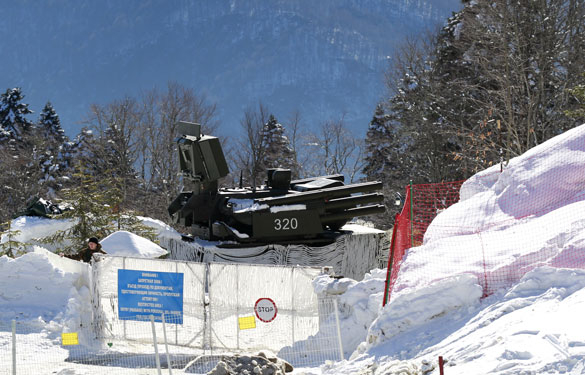 An anti-aircraft missile base near the Olympic cross-country skiing venue.

Representative Peter King, chairman of the House Homeland Security Committee's subcommittee on Counterterrorism and Intelligence, said on CNN's "The Situation Room" that the airlines and visitors to the Olympics should take the threat "very seriously."

"We are getting some information about what's happening outside of Russia, some external threats, that type thing, or potential threats. I don't want to overstate that," he said.

Security concerns have dominated the headlines in the run up to the Sochi Olympics, given the venues close proximity to the restive North Caucasus region. Last July, Chechen Islamist militant Doku Umarov called on his followers to disrupt the Games using "maximum force."