While the actors make flying on the trapeze under the circus dome seem easy, the training to bring joy to audiences takes a lot of dedication. The Russian circus, full of ordinary people with extraordinary abilities, started in the period of Peter the Great and still functions all over the country.

But how does it work and who are the people in it? The Moscow Times went behind the scenes at the Moscow Center for Circus Arts to understand the secret world of the circus. The establishment, which is responsible for creating new shows and hiring more than 8,000 artists for Russian circuses, opened its doors for journalists on Wednesday.

The first part of the press-tour program was the rehearsal of tricks which were going to be included into a new program. Actors demonstrated their artistry, bravery and flexibility in different genres such as air gymnastics, jugglery and balance. One juggler, Olga Aleksandrova, said the preparation of one trick, including staging and making costumes, takes a year of training every day on average.

Artists have a strict day-to-day regimen. They wake up and go to bed early, keep to a special diet, go to the gym and take ballet lessons. Most of the year they spend performing on tour across the country and abroad, though they use their holidays to see their families. 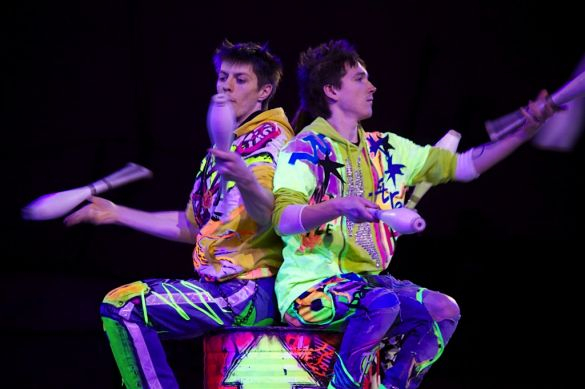 The circus arts center is highly selective, taking only the best candidates.

Aleksandrova, told the story of how she and countless other acrobats and clowns were initiated into world of the circus: "My mother brought me to the circus' entrance examination when I was 10. About 300 children came to the competition, but I was the winner. Since that moment, I have been crazy about the circus and can not imagine my life without it," she said.

A new program called "Show Time" aims to attract viewers of different demographics to the new generation of the Russian circus. It is intended for people with varied interests such as cinema, dance, youth subcultures and night life. Organizers say the show differs from regular circus programs due to the greater interaction with spectators, who can feel like participants in the performance. The show is planned to be put on in major Russian cities.

The circus performers' talents will soon be on display for the world at large, as the Moscow Center for the Circus Arts says more than 200 artists are going to take part in the opening of the upcoming Olympic Games in Sochi.