Today, the Caucasus is regarded as a region of instability, comprising heavily disputed areas as well as separatist regions. Now, a small group of scholars has exposed a different aspect of the region's diversity, traveling through the Republic of Georgia and collecting samples of folk music from its myriad ethnicities.

The region comprising what is now Georgia was recognized for its for its linguistic and cultural diversity as early as the 10th century, when Arab geographer Ali al-Masudi called this area "jabal al-alsum," or "mountain of tongues." Forming a land barrier between Europe and Asia that stretches for 500 miles from the Black Sea to the Caspian, the Caucasus' unique geography has seen it being the crossroads of various cultures and civilizations and the focus of political and religious rivalries for thousands of years.

The lack of national identities led to an explosion of folk cultures. The landscape and the isolation of villages from one another also played a role development of the region's diverse cultures without so much as the influence of a neighboring village only a few kilometers away.

The result of both isolation and exchange is an extremely rich diversity of musical traditions, but many of these traditions are now close to being lost, and no proper documentation of them is being undertaken.

"You would not call it Georgian music, so it was not being studied by Georgian scholars," explains Ben Wheeler, who was a folk music student at the Tbilisi State Conservatory. There, he noticed "an almost obsessive focus on Georgian polyphonic singing." 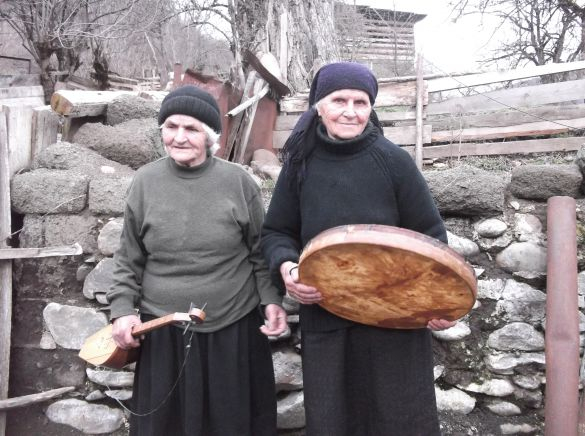 Women play the Dyareh, a traditional drum, in the highlands of Georgia.

While living in Tbilisi in 2012, Wheeler, together with historian Anna Harbaugh and anthropologist Stefan Williamson-Fa would frequently make weekend trips to villages and towns in the region on hearing of some interesting musical or cultural phenomenon.

For example, one of their first trips was to the village of Algeti in Kvemo Kartli, one of the centers of the Azeri-populated parts of southeast Georgia, to find an elderly Ashig, a trobadour who plays the Azeri saz, a plucked string instrument similar to a lute, and incorporates singing and poetry to the performance.

An elderly man now in his 80s, he had taught all the Ashigs in the community, and 15 of his former students showed up to hear him give an impromptu concert.

"There are all these really interesting roots that just are not being studied and just were not being recorded because they did not necessarily fit under certain guidelines. Even the archives of field recordings at the Conservatory provided no information whatsoever," Wheeler explains.

"It is amazing that they have been preserved for as long as they have, especially in these incredibly small communities. … The crazy thing about the Caucasus is that it is such a small area, but there is so much there. If we took the same song and went to the village next door, they would have no idea," Wheeler tells me, explaining their interest in the smaller folk cultures of Georgia.

They took to online crowd-funding platform Kickstarter to finance their research, which lasted nine months. Called the Sayat Nova Project, it is named after the prolific 18th-century Armenian poet and bard of the Caucasus who made his compositions in several languages. 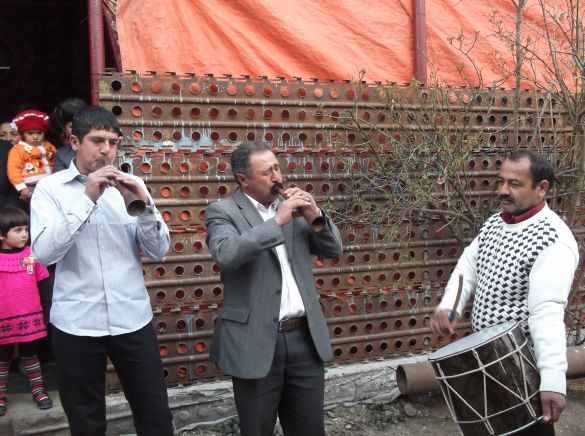 The new album has recordings of rarely heard instruments and languages.

They have amassed a trove of audio and video material, including field recordings and interviews with musicians collected from their trips, including songs in the Bats language, of which there are only about 2,000 native speakers, by the Udi people, one of the oldest tribes of the Caucasus, with a population of about 200 in the village of Zinobiani, and songs by Avars in Georgia, who also number about 2,000 from three villages.

A selection of their recordings, "Mountains of Tongues: Musical Dialects of the South Caucasus" has just been released on the L.m. Dupl-ication label, and it includes 19 tracks from 12 communities, including Azeris in Georgia, Acharians, Tushetian, Leski musicians from Azerbaijan and Kist and Chechen musicians from the Pankisi Gorge, among others.

Sounding like a mix of Middle Eastern and Eastern European music, almost all of the songs are performed by amateurs on traditional instruments, and the recordings are raw and unprocessed, sounding like they were just taken at the kitchen table from the living room with people going about their normal lives in the background, but Harbaugh says it that was a conscious decision to keep it that way. "Some of the ethnomusicology recordings are very sterile, very academic. The reality of the situation is that that is where they are playing the music, that is where they are usually performing. It is not in a studio," she adds.

The Sayat Nova Project is currently building an interactive website where all their material will be hosted. As for future plans, they tell me that they hope to return to Georgia to distribute the proceeds of the record to the musicians featured on it, as well as to explore the North Caucasus more extensively in the future. "I think Dagestan would be an ethnomusicologists' goldmine," says Wheeler.

"Mountains of Tongues: Musical Dialects of the South Caucasus" is available on LP and MP3 via Midheaven.com. More about the project can be found at facebook.com/sayatnovaproject.