TBILISI — The father of the Georgian luger killed during a training run at the Vancouver Olympics laments that his country will have no one competing in the luge when the Games get under way next month in nearby Sochi.

But David Kumaritashvili is optimistic about the future of the sport in Georgia and in his family, with his 1 1/2-year-old grandson destined to follow in the footsteps of his uncle and grandfather.

"At three, we will start training him," Kumaritashvili said by telephone from his home in Bakuriani, a mountain ski resort in the former Soviet republic.

His son, Nodar Kumaritashvili, died in 2010 when he lost control of his sled at nearly 145 kilometers per hour, flew off course and slammed into a steel pole. He was 21 and preparing to compete in his first Olympics halfway around the world in Canada.

The 2014 Winter Olympics in neighboring Russia are just up the Black Sea coast from Georgia, but the geographical proximity has not helped to create enthusiasm for the Games. Most Georgians are still bitter over a brief 2008 war with Russia that left two separatist territories firmly outside of Georgia's control, including Abkhazia, located just south of Sochi. Russia has troops stationed in Abkhazia and also in South Ossetia.

Tens of thousands of Georgians signed petitions calling for a boycott of the Sochi Games. As a compromise, the Georgian government decided that athletes could take part but no members of the government would go.

Kumaritashvili is pleased that Georgian athletes will be competing in Sochi. 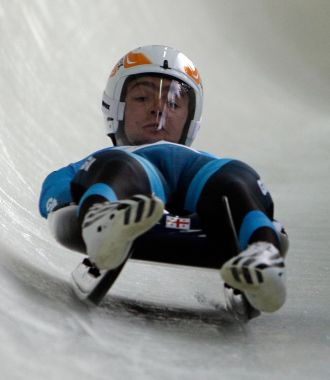 "Sports is sports," he said. "Politics should not be allowed to get in the way."

His only disappointment is that Georgia will have no one competing in the luge after Levan Gureshidze was sidelined by injuries. Gureshidze had gone to Vancouver, but withdrew from the competition after the death of his teammate and friend.

Georgia's hopes rest on young lugers now competing as juniors who will be old enough to participate in the 2018 Winter Games, Kumaritashvili said, expressing optimism that perhaps this year a new luge track will be built in Bakuriani as the Georgian government and International Luge Federation promised after his son's death.

"It is to be named after my son," he said. "Hopefully the IOC and the international federation of our sport will help with the financing."

Kumaritashvili recalled how devastated his family was by the death of his son and the difficult months that followed.

"My wife, Dodo, went through two operations. But life goes on," he said. "Our daughter Mariam got married and gave birth to a wonderful grandson, Niyako. He is already a year-and-a-half old. … I am certain that he will continue our luging dynasty."

The father said he would not be attending the Sochi Games in part because of the difficulty in obtaining a Russian visa, an obstacle for most Georgians wanting to travel to Russia.

The Georgian team in Sochi will consist of only four athletes: three alpine skiers and figure skater Elene Gedevanishvili, a veteran of the 2006 and 2010 Winter Games.

Georgia began participating in the Olympics as an independent country in 1994 and has not yet won a medal at the Winter Games.